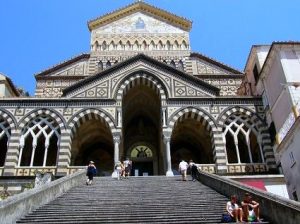 If you have never been to Pompeii, visiting while on a yacht charter along the Sorrento Peninsula is now easier than ever, with the new marina just built in the town of Sorrento. Cruise into Sorrento during the charter, and a half day tour of Pompeii can easily be arranged with a private guide. Pompeii is now a mere 20 minutes away by car from this new marina. A van and guide can be waiting for you to whisk you away to Pompeii after breakfast and before the heat of the day and back in time for a cool lunch in Sorrento. Don’t forget the Limoncello! 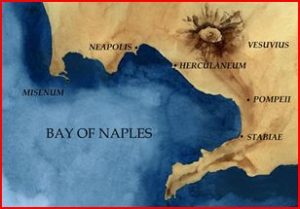 On a fateful summer’s day in 79AD, Mount Vesuvius erupted, spewing volcanic ashes and lapili over the village of Pompeii. Unaware of the imminent danger, most people continued on with their daily lives and as a result the entire town and around 20,000 of its inhabitants were buried under tons of ash and pumice.

Almost 2,000 years later, you can explore the preserved ruins of this famous disaster. Depart by taxi from either Naples or Salerno to Pompeii. While there your guide will show you fascinating places such as The Forum, Thermal Baths, the Lupanare and Vettius House with its beautiful frescos.

In ancient Roman cities the forum was the center of activity. There was a basilica, the center for legal and business matters, a macellum or marketplace along with various temples where the masses could appeal to their favorite deities. 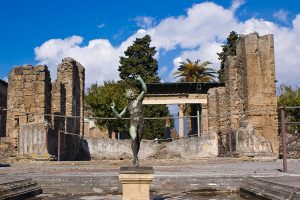 The Forum, Pompeii
The Vettius house belonged to two wealthy merchants, Aulus Vettius Restitutus and Aulus Vettius Conviva. Its beautiful paintings, still in their original positions, and the skillful reconstruction of its apartments make it one of the most interesting houses to visit in the whole town. 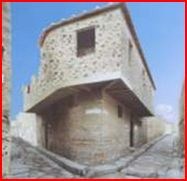 The House of the Faun is considered the most beautiful example of a private house from ancient times because of its size, decorations, and architectural importance. This house provides an incredible example of mosaic art including the Battle of Alexander the Great and Darius which is now in the National Museum of Naples.

Mosaic of Alexander the Great

The house was built at the height of the Samnite civilization and during the great influence of Hellenistic architecture, showing a fusion of Italian and Hellenistic elements.

Bronze Statue of the Dancing Faun

The greeting “Have” is in the front of the entrance to the House of Faun, and two shrines for the Lares (the household god) are high up on the walls of the entrance hall.

House of the Faun