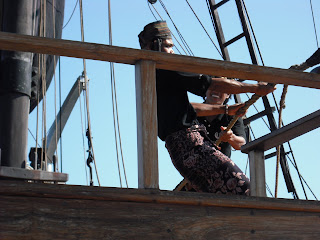 Missy Johnston of Northrop and Johnson Yacht Charters just returned from a 10 day trip to Indonesia to cruise the Komodo Archipelago on Silolona. Silolona is a traditional Indonesian gaff rigged Phinisi, built new, with modern conveniences along the line of the traditional age old Phinisi trading vessel that has plied the waters of Indonesia for many years.

From Newport, Rhode Island, Indonesia is a plane flight, requiring a flight first from Boston to Chicago, Chicago to Tokyo and Tokyo to Denpassar, where we spent a night before flying again the next morning to the Indonesian Island of Abubanbajo where, after landing, we drove to the little town of Flores to the seaside where Silolona was anchored. Coming on board, we were greeted by all 17 crew members, a local hail through a conch shell, along with the call of Silolona, rendered by Goris in traditional dress. Along with the 17 crew, we were also greeted with ice cold wash clothes, scented with lemon grass, and tall iced drinks of local juices with mint and a tall spoon carved out of coconut. Throughout the week, this wonderful tradition of scented cold wash clothes and fruit juices continued everytime we returned back on board from some adventure or other. 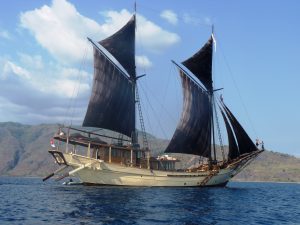 Silolona has 5 deluxe staterooms, each named for one of the fabled Spice Islands and decorated with original art from that island’s culture. Each stateroom has a double bed and side settee, that can also be used as a single bed. The large ensuite bathroom, has a separate shower, with plenty of hot water. The bath products are locally made natural soaps and shampoos.

After settling in, we set sail for a quiet anchorage in the Komodo Archipelago and beach time. Our luggage had all been marked at the airport and was waiting in our staterooms. Before sailing, our full crew was introduced to us, and we learned where in Indonesia each one was from and their crew position on board. While we sailed, lunch appeared on deck, first announced with fresh sashimi, pickled ginger and soysauce with sesame seeds. Lunch then started with a chilled green grape gaspacho topped with guacamole, followed by grilled fresh fish and a lovely lemon sorbet, accompanied by a New Zealand Cloudy Bay Sauvignon Blanc. 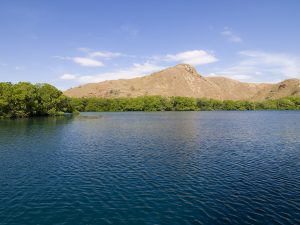 On arrival in our evening anchorage, the crew zipped ashore to set up beach umbrellas, lounging cushions, and beach towels anchored with local shells found on the beach. We had each earlier been sized for snorkel gear and fins, which was placed in a personalized bag and all snorkelers’ bags were beachside waiting. Several of the group went off in one of the ship’s tenders on a fishing expedition, returning with a lovely yellowfin tuna, that again was the evening starter as fresh sashimi. 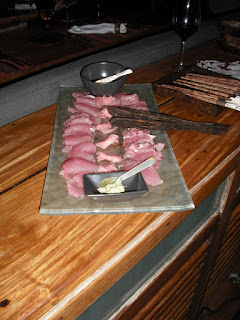 (View the Fresh Caught Tuna Picture in the following post)

Bobby, our Chef has a varied trained background in local Indonesian, Thai and Indian foods, along with western techniques. The menus throughout the week touched on local, Thai, Japanese, Western and Indian Cuisines. There was always a fresh fish appetizer, local nuts for cocktails, a first course, main course and dessert. Each accompanied by a good wine and fresh baked breads.
After swimming, and snorkeling, we settled in for dinner on deck under the stars, served by Kadek and Victor with elegant personal service and off to bed we went.

Recipe from Bobby for cocktail nuts

Mix the sugar, red pepper and Kafir lime leaves to taste, spread on a baking sheet and toast in the oven until the sugar mixed with red pepper has melted, covering the peanuts with a hot sweet coating infused with kafir lime leaf essence.