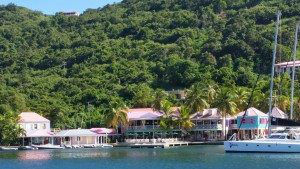 Once a lovely little bay, Soper’s Hole was heavily damaged in Hurricane Irma and has not yet been rebuilt

Tucked away at on the western tip of Tortola, is Soper’s Hole and Soper’s Hole Marina. This area, also called the West End, is home as well to a British Virgin Islands customs clearance office with a dock that is used by ferries and yachtsmen alike. Across the harbor from the customs clearance office, on the other side of a small anchorage is Soper’s Hole Marina, with dockage, marine services, a Pusser’s Rum restaurant and other boutiques and traditional crafts stores 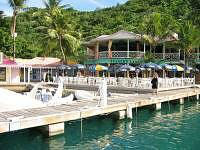 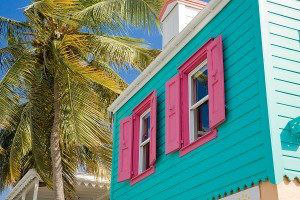 Surrounding the dock area are a series of brightly painted Caribbean style buildings creating a sense of a traditional Caribbean market place. Browse the shops for local artwork, crafts and jewelry made from a stone local to the British Virgin Islands, or stop for a bite to eat at the Pusser’s Landing Restaurant and store.

Pusser’s Rum was the original rum of the British royal Navy and for over 300 years the seamen on board a Royal Navy ship were issued a “tot” of rum each day with a double tot of rum given just prior to battle. The on board Royal Navy rum was issued each day by the Purser on board, and eventually the Purser’s rum became referred to Pusser’s rum. In 1970, that tradition was abolished in the British Royal navy and the recipe of the blend of 5 different West Indian rums was sold privately, Pusser’s Ltd. was established in Tortola and the same rum served over 300 years to the British Royal Navy was bottled and sold to the public in Tortola starting in 1980. 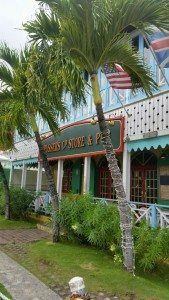 Pusser’s Rum quickly became a favorite of visiting yachtsmen when cruising the British Virgin Islands, which is very fitting as the Royal British Navy Sailors Fund, known commonly as the “Tots Fund” receives a portion of the sale of each bottle. Soon the now infamous drink, the Pusser’s Painkiller was born and is now served in a variety of locations in the BVI’s, but the best are served at the Pusser’s restaurants, including Pusser’s Landing Restaurant in Soper’s Hole, where the Pusser’s Painkiller is ordered by number according to the amount of rum poured in each drink. 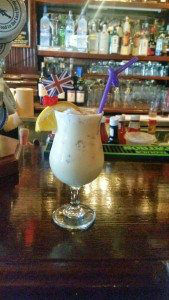 Attached to the Pusser’s Landing Restaurant is a Pusser’s Rum store selling products branded with the Pusser’s official label. In addition, Pusser’s Rum drink mixes are sold along with Caribbean spices and condiments, for a taste of the British Virgin Islands.