Charter Greece and Turkey; Cruise the Best of Both Worlds 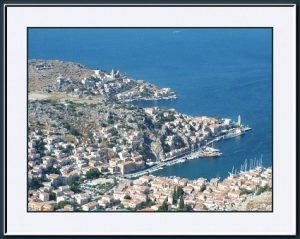 The far eastern string of Greek Islands, called the Dodecanese Islands, stretch along the far eastern border of Greece right along the western coast of Turkey. In fact some of these Greek Islands are closer to the Turkish mainland than to other Greek Islands. Let’s look at the Greek Island of Kos, for example, a mere 9 miles from Bodrum, Turkey. There are a myriad of itineraries available, which can combine the highlights of each country in this cruising area into one yacht charter cruise. 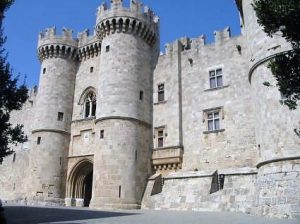 A nice charter itinerary to combine both the Dodecanese Islands of Greece and the Turkish coast starts from the ancient Mandraki Harbor tucked in next to the walled medieval city on the Greek Island of Rhodes. From there it is an easy cruise to the Greek Island of Symi, which many consider to be one of the nicest of all Greek Islands. There are several other small Greek Islands close by like Nisyros, with its strange combination of luxuriate vegetation against stark rocks. 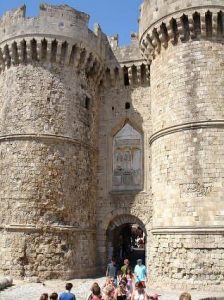 Old City Gated Entrance – Rhodes, Greece
Then on to Datca, Turkey, a small coastal town of Turkey, complete with its own Turkish Bazaar for a good dose of Turkish culture, perhaps resulting in the purchase of a rug or two. Close by to Datca are the ancient ruins of the town of Knidos, with the famous temple for Aphrodite. Anchor in the same ancient harbor that serviced this once bustling city on the ancient trading route. Then off to the quiet bay outside of Bodrum, perhaps to an anchorage beside Cleopatra’s Baths. And cruise into Bodrum, with the crusader castle dominating the harbor in ancient answer to the castle in Rhodes, completing a cruise from one castle to another now in two separate countries. 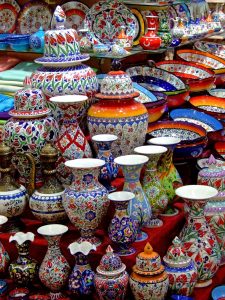