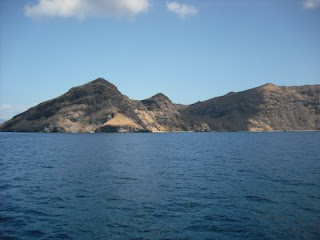 The Komodo Archipelago was different than expected. Having flown into Bali, where the vegatation is lush and tropical, arrival in the Komodo Archipelago found a dryer landscape. It was similar to the Mexican Baja Peninnsula, with beautiful rock formations, striated with mineral layers suggesting copper and iron ores, amongst several, probably embedded in the rock.

The beaches were white coral sand, littered with many shells, including large shells and large clam shells, coveted in other locations. Underwater, snorkeling was excellent, with the neon blue violet clam mouths undulating in the live clams as they syphoned algea for survival.

In the afternoon, we took a dinghy ride, visited an Indonesian fisherman in his dugout canoe, fishing to support his 9 daughters. In Indonesia the fisherman dress is the sarong, however, when approached by visitors, the polite thing to do is dress in pants, a shirt and hat and bow. Our fisherman quickly changed, bowed, and chatted with us, with his line over the side.

We then visited a local pearl operation. There are many pearl farms in this area, this farm was just starting. Several in the group went diving, with great reports after, and several went swimming and snorkeling. In the evening, it was off to fish again, with the prize a large tuna, quickly made into sashimi, and the local coconut milk raw fish salad. 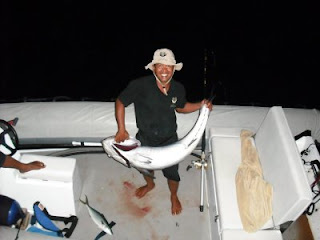