Cruising on Board a Charter Yacht into Rovinj, Croatia 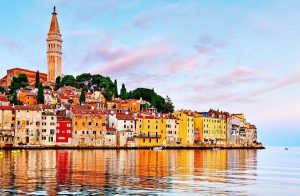 Cruise into Rovinj Harbor on your charter yacht and enjoy a traditional fishing village on the Istrian Peninsula in northern Croatia where a copper statue of their Patron Saint, St. Euphemia points out to sea when the weather is good for fishing, and into town when weather is poor, and no fisherman should leave the harbor.  All locals abide by what their good St. Euphemia tells them and only leave the harbor to fish when the statue, perched on the top of the bell tower of the Church of St. Euphemia on the highest point of land in town, points out to sea.  And it is wise, when on a charter yacht, to take heed of St. Euphemia’s message as well as St. Euphemia is the Patron Saint of Rovinj after she in her sarcophagus floated into the harbor sometime in 900 A.D., some say from a spectral ship. 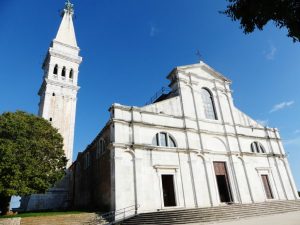 St. Euphemia converted to Christianity and sometime in 304 A.D she was ordered to be tortured and killed by Emperor Diocletian for her beliefs, being first tortured when strapped to a wheel and then killed by being thrown to the lions.  At some point in the 10th Century, the Pope in Rome was gathering from far and wide the icons of various Saints to be brought to Rome.  It is felt that during this time period, the body of St. Euphemia in her stone sarcophagus was being transported to Rome on a ship which must have met with bad weather in the northern Adriatic Sea and sank, and the stone sarcophagus, with what is believed to hold the body of St. Euphemia, due to a scroll found with the body, floated into Rovinj harbor.  After floating into the harbor, the sarcophagus was dragged onto the beach by oxen.  Counting this as a miracle of some import and certainly that St. Euphemia must belong to the people of Rovinj and have been specifically sent to protect the people of Rovinj, the sarcophagus and body were enshrined in a church at the top of what had once been a nearby islet; by then attached to the mainland by a causeway built by the Romans.  Once enshrined, a statue was built and placed on a wheel, the tool of St. Euphemia’s Martyrdom, on the top of the church bell tower. It was soon found that when the winds picked up preceding bad weather that over a few days, the statue would turn and the pointing figure of the statue of St. Euphemia would point into town, as if to say, Fishermen, “Stay Home”, and home they would stay.  When all was calm, the statue would swing, and St. Euphemia would be pointing out to sea and the fishermen would head out to catch fish. 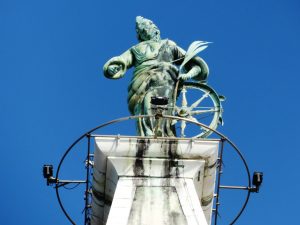 Statue of St. Euphemia on top of the Bell Tower

The present Church of St. Euphemia was built from 1725 to 1736 and is the largest Baroque style church in Istria sitting at the peak of Old Town.  Next to the church is an older 61 meter bell tower started to be built in 1654, with construction lasting 26 years.  Originally the statue of St. Euphemia was wooden however today the 4 meter high statue is copper and rotates with the wind on a spindle.  Within the Church, behind the right hand altar, St. Euphonia is ensconced in her carved stone sarcophagus.  Every March 16th, the front panels of the sarcophagus are opened to all with air tight clear plexiglass enclosing her body.  It is said that by those viewing her today that her body and clothes are extremely well preserved.

The Church of St. Euphemia is surrounded by Old Town with a series of walking streets with steps that wend upwards through courtyards past old buildings to the summit where the Church sits perched surrounded by a spectacular view.  Enter Old Town through Balbi Gate, an elaborate arch built in 1679 as the main town gate. The top of the arch is ornamented with a Turkish head on the harbor side of the arch and a Venetian head on the Old Town side of the arch. The winged lion at the top is a symbol of Venice.  Wander the walking streets with little shops, bars, and a Michelin One Star Restaurant Named Monte.  Be sure to walk up or down Grisia Street lined with galleries and souvenir stores where the windows, balconies, portals and squares are a mixture of all styles from various time periods, including Renaissance, Baroque and Neoclassic styles. 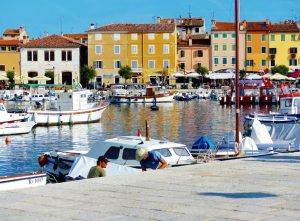 Across from Old Town hill is another harbor filled with little fishing boats where a more local lifestyle occurs.  Between the two harbors is the Green Market along with the Fish Market.  Some say the prices in the Green Market are very high however, there are locally grown fruits and vegetables and fresh caught fish in the market and if there is no opportunity to venture further into Istria, this may be an opportunity to purchase fresh Black and if in season, White Truffles. 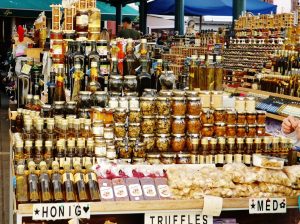 This port town of Rovinj is one of the gateways into Istria if wanted to explore further as in the agriculturally rich center of Istria are vineyards with award wining wines, groves of olive trees from which lovely olive oils are made that are not harvested until November, and then same day cold machine pressed, industrious bees making honey tinged with the flavor of various flowers with hives set next to citrus groves, and lavender fields, and both black and white truffles growing in the roots of trees in the Motovun Forest.  Perched on the top of a mountain is the medieval walled village of Motovun with one long winding cobblestone road reaching to the top where the fortress buildings sit overlooking the valley below. 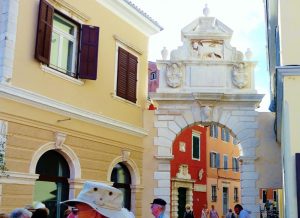