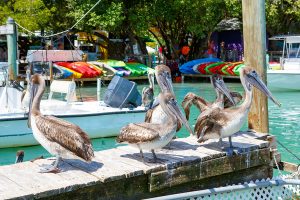 At the southern tip of the Florida Keys, is the most well-known part of the Keys, the historic town of Key West, also known as the “Last Resort” which is a “must do” for every charter yacht to visit on a Florida Keys yacht charters. Key West is a unique town of gingerbread trimmed “Conch Houses”, charming shops, and is a gathering spot for artists of all genre. The streets are a constant lively panorama of street musicians, carnival acts, artists, and basically everything under the sun all happening at once in the unique style belonging only to Key West. So board your charter yacht and cruise down this string of southern tropical Keys making sure to spend time in Key West on a Florida Keys yacht charter. 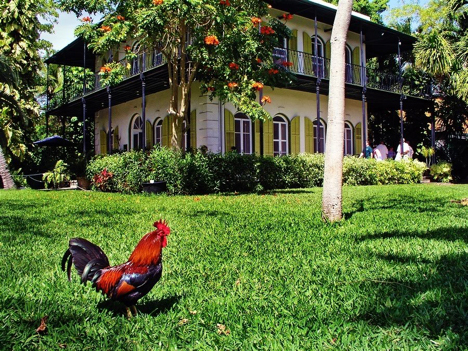 This was Ernest Hemingway’s home from 1931 to 1939, where he and his family lived with a variety of 6 toed cats. Located across the street from the Key West Lighthouse, today the home is open for touring, and is a U.S. National Historic Landmark.

It was in Key West, in this house that Hemingway did some of his best writing including the short story classics “The Snows of Kilimanjaro” and “The Short Happy Life of Francis Macomber”, his novel “To Have And Have Not”, and the non-fiction work “Green Hills of Africa”. 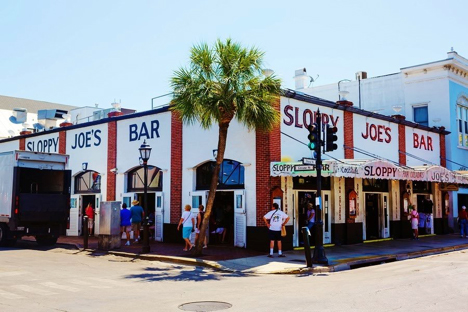 This is a town where yachtsmen should to step ashore from all charter yachts, and explore.  Sloppy Joes, an infamous downtown bar, was once a hangout for Ernest Hemmingway. The official legal opening of Sloppy Joe’s Bar was December 5, 1933, the day Prohibition was repealed as until that time the Owner, Joe Russell, had a speakeasy that Hemmingway also frequented. After opening under a different name, the bar went through several name changes, until the name Sloppy Joes, supposedly suggested by Hemmingway as adopted from the Jose Garcia Rio Havana, Cuba club, another favorite place of Hemmingway’s, selling liquor and iced seafood. Because the floor was always wet with melted ice, Spanish Joe was said to run a sloppy place, hence the name. In 1937, the bar was moved to the present location now anchoring Duval Street. 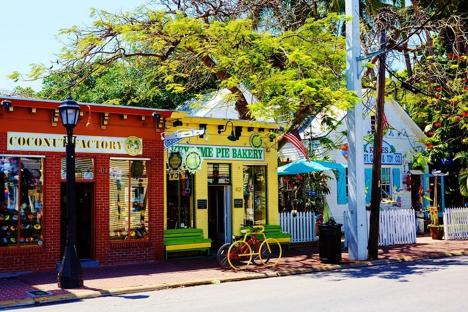 Duval Street, named for William Pope Duval and highlighted in a Jimmy Buffet song, is in the downtown center of Key West and just over 1.25 miles long; running north to south from the Gulf of Mexico to the Atlantic Ocean. Being very close to Cuba, Key West has a strong Cuban influence and once Duval Street was lined with cigar making shops. Beautiful Bahamian and Spanish influenced Victorian Mansions at the Gulf of Mexico end of Duval Street have been well preserved through local efforts starting in the 1960s. On the Atlantic Ocean end of Duval Street is a mix of early Key West Victorian mansions and bungalows. In the evening, leave your charter yacht behind for Duval Street.  Art galleries, boutiques, inns, bars and restaurants line both sides of the street, and on certain nights, the street is alive and buzzing with activity that can last until dawn and beyond as tourists, fellow yachtsmen and residents alike take part in an unofficial and informal activity now called the “Duval Pub Crawl”. 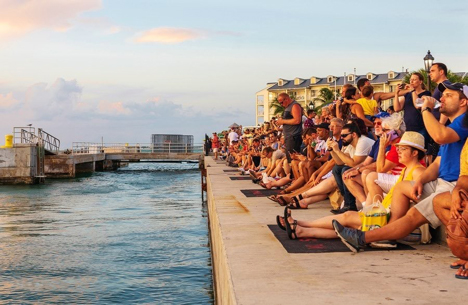 For sunset, everyone heads to Mallory Square which has always been a hub of Key West’s social and commercial life from when the city came into being in the 1820’s. It is in Mallory square where master wrecker Asa Tift’s ships filled with goods salvaged from local shipwrecks would come in, and the goods would be unloaded right into warehouses on the waterfront and where locals would come to hear the news of the day, and exchange gossip. Since the 1960’s, sunset at Mallory Square has taken on an impromptu festival feel, starting around 4:00pm, two hours before sunset. Jugglers, magicians, stilt-walkers, mimes, artists, and various other Key West “originals”, gather daily to celebrate the setting of the sun, hoping to see the “green flash”.

Besides Hemmingway, Tennesee Williams, who died in 1983, also made Key West his home for 34 years where he lived modestly in a little home which is now a museum. Williams won two Pulitzer Prizes for a “Streetcar Named Desire” and “Cat on a Hot Tin Roof”. 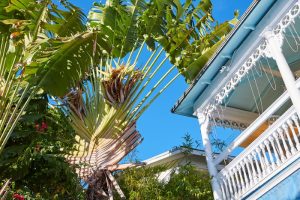 Wander the various streets of Key West that are filled with restored Victorian Houses. Walk to the southern most part of the United States where a marker identifies the spot. Key West is a very easy town in which to stroll the streets, wander into the shops, and visit the multitude of museums. And everywhere are restaurants serving sweet fresh gulf shrimp and raw gulf oysters. 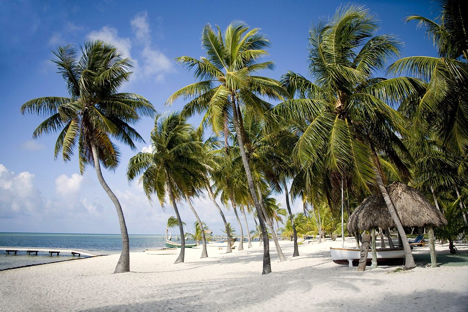 What to See and Do in Key West, Florida

Sloppy Joe’s Bar: Since opening the day Prohibition was repealed, this bar has seen decades of drinking Key West style, which can be heavy with a bit of debauchery. The Hemmingway House features an outside fountain for water for the cats that is a urinal from this bar. Today, while there are many tourists in the bar, there are still dedicated locals, and usually there is live music with a rowdy crowd.
Mallory Square: Activity starts around 4:00pm, with a full festival feel, and continues until the sun sets. Locals and tourists both enjoy this daily event, all open air on the water’s edge.
Duval Street: A center of downtown Key West, wander up and down the street filled with shops, art galleries, bars and restaurants. At night join in the informal “Duval Pub Crawl”. 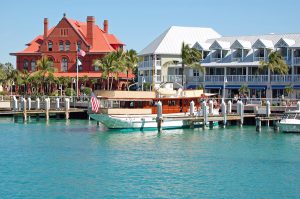 Key West Art & Historical Society Custom House Museum: Originally home to the island’s customs office, postal service, and district courts. The building itself is an excellent example of Richardsonian Romanesque architecture typical for Federal buildings at the end of the 19th century. Inside are two floors of exhibits on Key West history, nationally famous residents, and interesting local residents.
Mel Fisher Maritime Heritage Museum: Filled with treasure and artifacts from Fisher’s shipwreck finds and marine excavations, the most well-known of which was the excavation of the ship “Atocha”. Within the museum is a collection of coins, gold bars, emeralds, and other historic maritime artifacts.
The Oldest House: Learn within, from local volunteer guides, the story of the owners, and history of Key West. The original portion of the house, separate kitchen building and gardens are open and furnished with some of the original furnishings.
Keywest Shipwreck Treasure Museum: Within find a recreation of a 19th century ship wrecker’s warehouse, such as Asa Tift owned on Mallory Square, with exhibits of shipwreck artifacts, audio-visual displays, and storytellers in period costume bringing alive Key West’s shipwrecking past.
Tennessee Williams Museum: William’s home when living in Key West for 34 years is filled with an extensive collection of photographs, first edition plays, rare newspaper and magazine articles and videos to more fully learn about the life of this prolific writer. Williams lived in a modest home so the museum is no more than 700 square feet.
Harry S. Truman Little White House: The Harry S. Truman Little White House was a winter residence for Truman, the 33rd president. In total, during his presidency, Truman spent 175 days during 13 vacations in the home. Today the museum is filled with original furnishing and memorabilia from that time period. Presidents Taft, Eisenhower, Kennedy, Carter and Clinton also used the home.
Fort Zachary Taylor Historic State Park: Historic site of a Civil War-era fort, currently being excavated. There are trails throughout for hiking and a beautiful clean water beach for swimming and snorkeling.
Audubon House & Tropical Gardens: Built between 1846 and 1849, by Capt. John H. Geiger, harbor pilot and master wrecker, the home was beautifully restored in the 1960’s, and today is filled with antique furnishings, and 31 of the original hand colored engravings created by J.J. Audobon of the birds of the Florida Keys. Beautiful tropical gardens surround the house.
Hellings House Museum: Located right on Duval Street with an historic marker identifying the house on the sidewalk, this house from the 1880’s is one of 39 buildings in the historic district worthy of architectural preservation. Now owned by the Key West Woman’s Club who give tours through the house free of charge with a donation box located at the end of the tour.
Heritage House Museum: This Caribbean Colonial House owned by the Porters, a noted Key West family, dates from the 1830s and includes original furnishings, rare antiques and unusual marine artifacts that were collected by the Porters.
U.S. Coast Guard Cutter Ingham Maritime Museum: Located on the U.S. Coast Guard Cutter Ingram that saw active duty in WWII and Viet Nam. Today the ship is a National Historic Landmark. In use from 1936 to 1988, the “U.S. Ingram” was the most decorated ship in United States Service. Today see the interior of this ship and imagine life on board during war time.
Key West Lighthouse and Keeper’s Quarters Museum: The Keeper’s quarters includes exhibits on keeping a lighthouse, and historic information on women lighthouse keepers. Climbing to the top of the lighthouse offers a 360 degree view.
Key West Cemetery: Located in Old Town, the Key West Cemetery from 1847 is a reflection of the unique attitude of past Key West residents, including epitaphs on gravestones, such as “I told you I was sick” and “I’m just resting my eyes.” One tombstone is a ship’s mast. Many of these burial plots have multiple people stacked on top of one another. 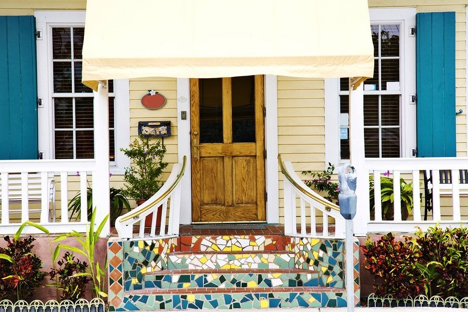 Historic Key West is a bustling town, offering a multitude of activities, shops, art galleries, museums, restaurants and bars, along with beautiful town streets for strolling filled with Victorian architecture. It is a “must do” to include Key West on all Florida Keys yacht charters.