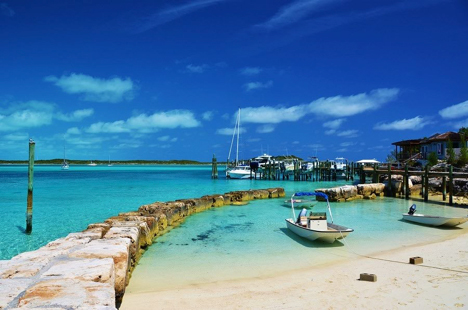 A main island in the island chain of the Exuma Islands, yacht charter centers around Staniel Cay.  About 55 nautical miles from Nassau, Staniel Cay is less than 2 square miles in size and has a population of less than 118 full-time residents. Clustered around a small marina where charter yachts dock, is the village which includes the Staniel Cay Yacht Club, residential housing, a church, post office, library, a few retail stores, several casual restaurants/bars, aquatics companies and a marine supply shop. Staniel Cay is protected by the Bahamas National Trust. Around Staniel Cay there is so much fun to be had on any Exumas Islands yacht charter that it is easy to spend several days with Staniel Cay as a hub on a Bahamian yacht charter in the Exuma Islands. 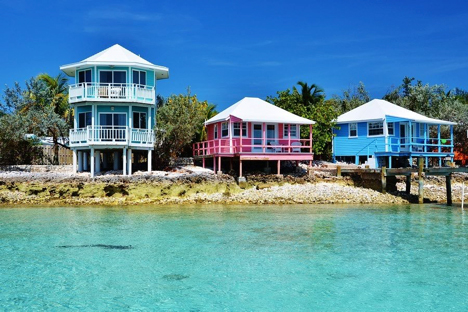 Staniel Cay was first established by American Loyalists in 1763. It was the founding of the Staniel Cay Yacht Club in 1956, that helped the island gain popularity, especially for a stop on an Exumas Island yacht charter. Today the Yacht Club serves meals with advance reservations. Staniel Cay also has a little airport for flights on smaller planes in from Florida or Nassau, which makes Staniel Cay a good starting and/or ending port for a Bahamian yacht charter in the Exuma Islands. 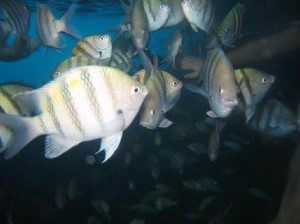 Several James Bond movies were filmed in the area or on the cay. Thunderball, included a nearby limestone cave that was then named Thunderball Grotto after the film, and a scene for Never Say Never was filmed on Staniel Cay. Thunderball Grotto is close by Staniel Cay and can be easily accessed from Staniel Cay by ship’s tender. This is one of the few Grottos where one can snorkel or swim within the Grotto waters rather than be required to see the beautiful water colors that the sun piercing through the grotto walls creates by entering in a tour boat with restrictions from entering the water.

Allen Cay is within a tender ride of Staniel Cay and is home to a rare black iguana species called the Northern Bahamian Rock Iguana. This iguana species has a three further subspecies, with the subspecies on Allen Cay called the Allen Cay Northern Bahamian Rock Iguana. With the total population of all three subspecies of this iguana numbering less than 5000, great care is taken to support and provide proper nutrition when feeding the iguanas. On arrival by ship’s tender at Allen Cay, the iguanas, who seem trained to the sound of the outboard engine, come running down to the beach. Iguanas eat various types of vegetation and fruit, however cannot digest sand, so it is best to offer the food, a strong recommendation is grapes, stuck onto the end of a stick. These iguanas can reach 24 pounds and live 40 years. 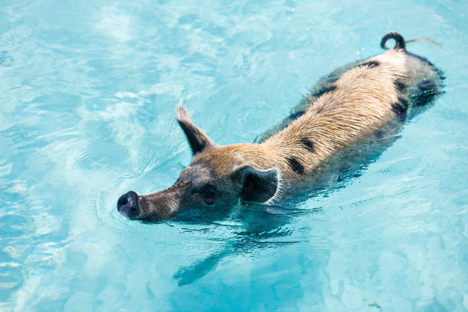 Probably the most well know animal to visit and feed are the swimming pigs, that live on Great Major Cay, also nearby Staniel Cay. These pigs were living on Staniel Cay, however were troublesome feral pigs, so the locals say that in the 1990’s they moved the pigs to Great Major Cay where the only other inhabitants are stray cats. Once there, the locals waited until a pig was fat enough for an island meal. Soon passing yachtsmen in ship’s tenders started feeding the pigs, greatly helping with the fattening process, however to get to the ship’s tender for food, the pigs had to swim, and swim they did out to the tenders for food handouts. Today, mamma pigs teach their little piglets to swim from the get-go, and a mamma pig can be seen swimming with her little piglets swimming not far behind. People do go ashore on the cay; however, the pigs are feral and have been known to knock down a grown man if they think this is a manner to get food. People swim with the pigs as well, however the pigs are more interested in food, than swimming with people, and have been known to kick and scratch swimmers with their hooves. It is best to enjoy the view of the pigs on the beach, and the phenomenon of seeing pigs swim, and throw food from your perch in the ship’s tender to the pigs that swim alongside your charter yacht tender for a handout.

Around the perimeter of Staniel Cay are great snorkeling and scuba diving spots along with other great spots in the waters around neighboring islands and cays. There are also other grottos and caves. Staniel Cay and the surrounding islands within the Exumas contain a wide range of scuba diving attractions including steep reef walls, historic ship wrecks, shallow coral reefs, and a diverse range of fish. Because of the clarity, Staniel Cay and the surrounding waters offer great conditions for underwater photography and video

Cruising outside of the Exumas Land and Sea Park on your charter yacht, the borders of which Park are very close to Staniel Cay, great fishing for both shallow water and salt water fly fishing, bonefishing and deep sea fishing is available, and outside of the Park are deserted cays where beach bonfires can be lit for spectacular dinner barbecues created by your yacht charter crew.

Staniel Cay Yacht Club: Enjoy a drink or with advance reservations, a meal at the Yacht Club. Non-Members are welcome.

Snorkeling and Scuba Diving: Around the island are great snorkeling and scuba diving locations, including a small plane wreck in very shallow water

Rent a Golf Cart: Used by the locals, golf carts are available to rent by the hour to explore inland or visit the various beaches from land. 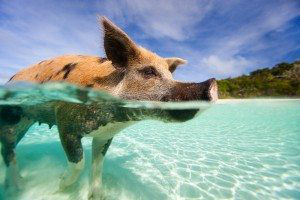 Visit the Swimming Pigs: With the charter yacht anchored or docked in Staniel Cay, Great Major Cay, home to the swimming pigs and several stray cats, is close enough to Staniel Cay to be able to visit the pigs by ship’s tender. Be sure to bring food to feed the pigs, as that is their main interest.

Visit the Iguanas on Allen’s Cay: By ship’s tender, Allen’s Cay is close enough to Staniel Cay to jump in the tender and beeline for Allen’s cay, where the iguanas, on hearing the tender outboard engine will come out to the beach to greet you. Bring edible greens and fruits, and a stick to be able to feed the iguanas by sticking food on the end of the stick, so that food is not laid in the sand, which is difficult for the iguanas to digest.

Fishing: Outside of the Exumas Land and Sea Park is great fishing, including deep sea fishing in nearby underwater channels, salt water fly fishing, bonefishing, and depending on the regulations and season there may be spearfishing for grouper and lobster. 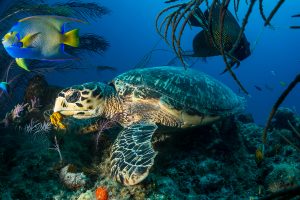 Use Staniel Cay as a hub for several days of fun when on an Exumas Island yacht charter in the Bahamas.