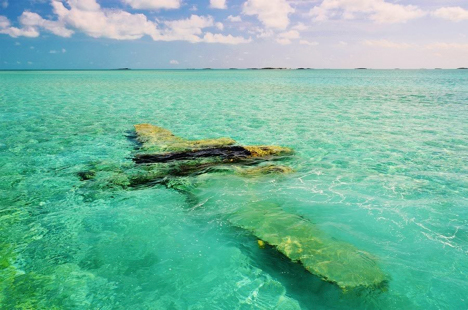 Day 1: On  this yacht charter itinerary in the Exumas, board your charter yacht in Norman’s Cay, once a haven for drug runners in the 1970’s and 1980’s, including serving as the headquarters for Carlos Lehder’s drug-smuggling operation from 1978 until around 1982. Lehder, is often thought to have revolutionized drug smuggling by using planes to bring in huge shipments from an offshore island like Norman’s Cay rather than small shipments carried by human drug mules

Lehder eventually extended the airstrip on Norman’s Cay to a length of 1,000 meters (3,300 ft) for his fleet of aircraft and had armed guards and attack dogs on the beaches and runway to protect the island. The island was a strategic point for Colombian drug flights to refuel and rest before proceeding to the United States. The island became a location for wild partying until Lehder was arrested.

Today, the island slumbers on owned by a collection of private owners and only accessible by private air and yacht. After boarding head to nearby Wardarick Wells/Shroud Cay and overnight on anchor. Enjoy swimming, snorkeling and beautiful beaches. 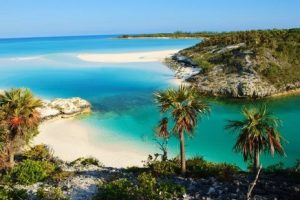 Day 2: In the morning take the dingy through unspoiled mangrove creeks for a private lunch on a spectacular unspoiled ocean beach. Hike along the trails to see a variety of birds and wildlife. The northernmost cay is the Exuma Cays Land and Sea Park a 176 square mile maritime park created in 1958,. The island is sliced up by sandy bottom, mangrove creeks, and a unique current area called the “washing machine”. If you jump in the current on one side of the point, it will wash you around to the other side, for fun that never grows old. This cay is uninhabited and is part of the Exuma Park. Head ashore for a beach picnic on a deserted beach of which there are many from which to choose.

Warderick Wells/Shroud Cay is home to the Exuma Land and Sea Park headquarters. Its mooring area is visually stunning with a deep channel that runs parallel to the island, bordered on one side by the beach and on the other side by a sand bar. Beyond, the sea stretches the horizon in layers of undulating white sand mixed with deep and light blues.

The boundaries of the park stretch from Wax Cay Cut in the north to Conch Cay Cut in the south. Warderick Wells sits roughly in the middle, with several beaches to enjoy and multiple coral gardens.

Common sightings when snorkeling or scuba diving in the National Park waters, include lemon and nurse sharks, spotted eagle rays and three- to four-foot-long lobsters hiding under coral heads. All marine life is protected in the park, and anchoring is prohibited in coral reef areas. On the island, hiking trails are posted with a variety of wildlife, including many bird species and the endangered hutia rodent.

Next to the park headquarters of the Exuma Cays Land and Sea Park in Warderick Wells is a lovely white beach, but you won’t be looking at the sand when you first arrive. The beach is dominated by the stunningly huge skeleton of a sperm whale that died in 1995 because it consumed plastic. The skeleton makes an emotion-packed statue that no artist could duplicate. Equally striking is the skeleton against the gorgeous blue shades of water and the glistening white sand. Be sure to check out the underwater snorkel trail in the park.

Later in the afternoon, sail to Halls Pond Cay, a private island, uninhabited and today virtually untouched while thoughts go on in heads far away about what to do with this island. Meanwhile the 12 beautiful powder white sand beaches slumber on. Anchor and enjoy swimming, and snorkeling in this beautiful remote location. Overnight on anchor 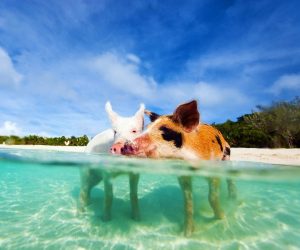 Day 3: In the morning cruise to Compass Cay Harbor, coming in to anchor and “swim” with the nurse sharks in the harbor waters. After, head towards, Great Major Cay, stopping in one of the anchorages to enjoy swimming, relaxing and a lovely lunch. After lunch, it is time to see the swimming piggie. Cruise in the yacht or ship’s tender and be sure to bring food. It is best to just throw food at the pigs, as they have been known to climb into tenders in search of food, and it is best not to try to swim with them, as they have very sharp hooves, or to walk on land with them, as larger pigs can knock a grown man down hard to the ground. These are feral pigs, that just want food. The largest type of injury in the ER in Nassau is from the swimming pigs.

After cruise to Staniel Cay. Perhaps this would be a night to eat at the Staniel Cay Yacht Club, with reservations made in advance. Overnight on anchor. 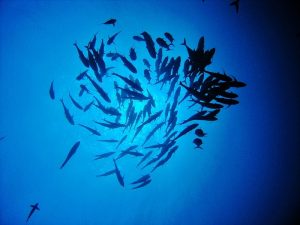 Day 4: In the am cruise to enjoy the morning light coming into Thunderball Grotto, named after the James Bond film of the same name that was filmed close by. This is a snorkel or scuba diving location. After, cruise to a location to anchor for lunch. Then visit Allen’s Cay to see the rare Black Iguana only living in several worldwide locations. Be sure to bring the right food for these iguanas. When they hear the tender engines, they will come running out onto the beach.

Cruise to Bell’s Cay and Little Bell’s Cay to overnight on anchor. Just south of Little Bells Cay is the Rocky Dundas in the national park. There are two caves to explore. As with Thunderball Grotto, at high tide, swim underwater to get inside. At low tide, swim through the larger of the two caves to enter. A small, low tide beach is inside; many stalactites and stalagmites textured rock, fossilized beetles and the imprints of shells and coral cover the cave walls. Snorkel outside the cave where there is a sandy bottom and colorful coral outcroppings, including a huge piece of endangered Elkhorn coral, bright orange and covered with marine life. Overnight in a lovely anchorage on anchor. 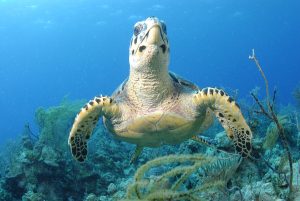 Day 5: In the morning, cruise to Hawksbill Cay. Now uninhabited, One of the best preserved loyalist ruins in the Bahamas is on Hawksbill Cay, which belonged to the Russell Family from 1785- 1830. Today, nature has taken over so that only a couple of walls remain of the remnants of the 10 houses and numerous outbuildings of this historic sight. In the late 1700’s, the American Revolution created a wave of immigration to the Bahamas. Loyalists to the English Crown moved to the Bahamas and settled in the Exumas. Most were southerners who moved there with their slaves. Early cotton crops were successful, but the thin soil of the cays and the attack of the chenille, a ravenous caterpillar, prevented long-term cultivations. After the cotton crops failed, a handful of the Loyalists stayed on in Exumas, hoping to resuscitate their fields. However, in many cases, the land was simply abandoned and the slaves were left to fend for themselves.

At low tide, there is a magnificent soft sand bar stretching across the end of the cay. It is possible to walk from the north end across the sand bar to the east side of the island. From Russell Ruins Beach, a rocky trail leads to the ruins of the Russell Family Plantation. A fork in the trail leads to a beach on the eastern shore. Overnight on anchor. 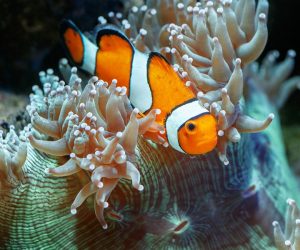 Day 6: Cruise to Norman’s Cay. Rich in history, the island has been exploited by pirates, farmers from America have grown crops on her thin soil, and blockade runners have used her as a transit point to America during the Civil War, Prohibition, and the War on Drugs.

The waters around the island are beautiful, and in the waters are the remains of a Curtiss C-46 Commando twin engine plane used for drug running whose pilot overshot the runway, and here the plane has sat for decades. This is a fun snorkeling and scuba diving location.

Norman’s Cay does have a beautiful beach known as Saddle Cay Beach. Positioned at the northern end of the island, this stretch of land is mostly untouched. Completely unspoiled, Saddle Cay beach is the perfect tranquil getaway.

Perhaps have dinner at MacDuff’s, (reservations required) where bartenders are always on-hand to mix up a tantalizing concoction with local favorites such as Goombay Smash, Bahama Mama or a Mango Daiquiri. Executive Chef Jason Wallace has brought his international culinary expertise and thoughtful attention to detail to MacDuff’s Restaurant and Grille.

Cracked Coral Head: near Norman’s Cay which is abundant in coral and marine life. Here you can dive with hammerhead sharks, French angelfish, dolphins, and lionfish.

Thunderball Grotto: Near Staniel Cay, this dive site is yet another famous filming location for several Hollywood movies, like Disney’s Splash and James Bond’s Never Say Never Again and Thunderball – this stunning dive site derives its name from the latter. Divers can explore a unique geological formation, a spellbinding limestone reef base dotted with holes, cracks and crevices. Aside from corals teeming with lots of tropical fish (including a rare and endemic species of sponge) you’ll find plenty of tunnels to explore.

The Washing Machine: Just north of the Exumas Land and Sea Park, a drift dive like most coral reef dives, you will see plenty of reef fish, invertebrates, and the invasive lionfish. Keep your eyes peeled for brightly colored nudibranchs, well camouflaged leaf fish, and shy crabs and other crustaceans.

Exuma Land and Sea Park: Dive along walls, healthy untouched reefs, and sharks in this vast park. Jeep Reef, a famous dive is one of the healthiest and most colorful reefs in the Bahamas and is known for the reef’s coral-encrusted jeep.