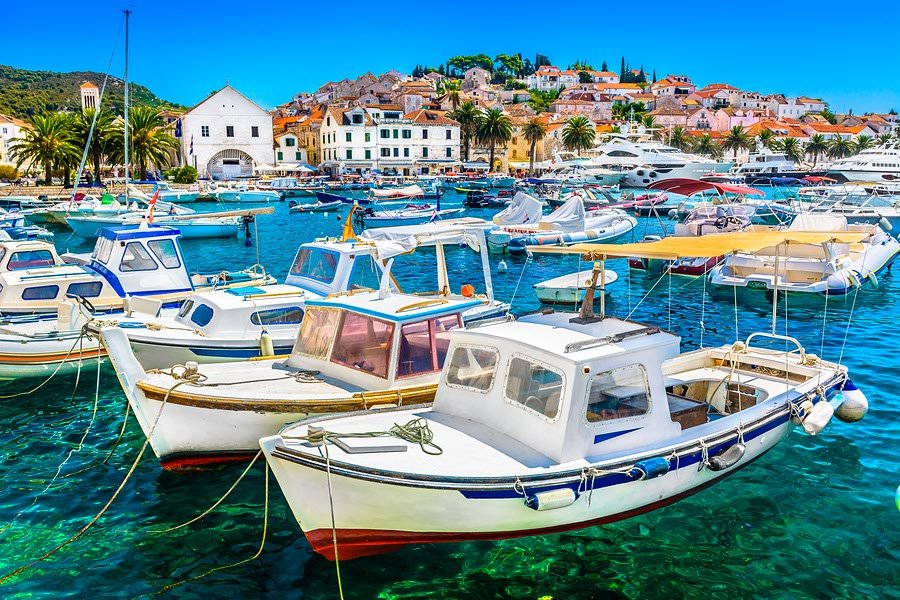 Only able to be visited by sea, the island of Hvar in Croatia, one of the Dalmatian Islands, is a natural stop on a crewed yacht charter along the historic Croatian coast. Sitting in a strategic trading location, this island has been a natural stop for seafarers throughout history, with each civilization leaving a mark on the face of this island reflected in the many historic buildings and ruins remaining. Cruise into Hvar Town on the island, once home to a major Venetian Empire naval base on your crewed yacht charter of the Dalmatian Coast. 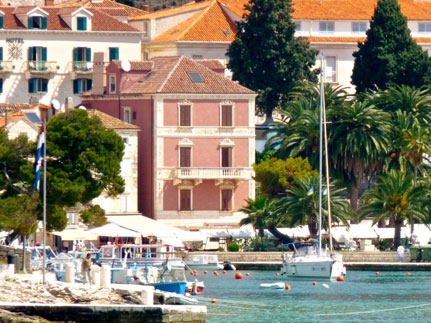 The island of Hvar has been populated since prehistoric times. Having a mild climate, a large fertile plain, and several fresh water springs, the island has always been a welcoming habitat throughout history. As the Adriatic trading routes developed, Hvar gained increasing importance as a trading center. And while wealth flowed through the island as a commerce center for trading, islanders worked the fertile growing areas producing trade goods of their own including wines, olive oil, and lavender for aromatic oils. And of course, as an island, fishing was a large commercial industry.

Today, explore Hvar Town and hike up to the castle overlooking the town and harbor for a great photo op. The main square is ringed with cafes and chic shops, while little kiosks sell lavender products near the tender docks. 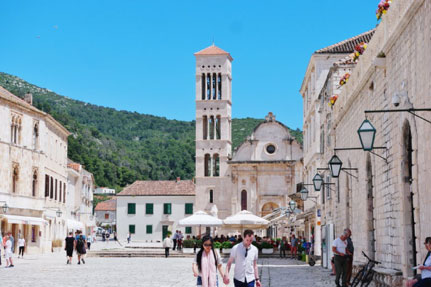 Today, grapes are still grown for the boutique wineries on the island that are producing both red and white wines. Fields of lavender, and olive trees can be seen across the countryside, and fresh fish is readily available. Hvar is a beautiful fertile island and while there try sampling wines from boutique island wineries, olive oils from local olive oil presses, honey from local hives, and perhaps shop for lavender goods, including the much-prized lavender honey. 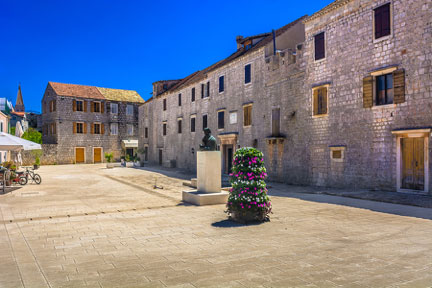 There are four main towns on the island, Hvar Town, Jelsa, Stari Grad, which is the main commercial seaport on the island, and Sucuraj. Surrounding the island are beautiful beaches, and anchorages including the picturesque anchorage of Milna on the southern coast, all with crystal clear waters. Hvar town is becoming a chic spot to see and be seen and has an active night life starting at sundown with a drink at Hula Hula Bar, continuing to the main square for dinner, followed at midnight by dancing at Carpe Diem on the harbor front and Carpe Diem Beach on a nearby island.

Stari Grad is considered one of the oldest continuously lived in towns in the EU, and the town and Stari Grad Plain behind the town are together a UNESCO World Heritage Site, as Stari Grad Plain divided into small plots outlined by rock walls by the Greeks, continues to be farmed in the same manner as laid out over 2000 years ago.

What to Enjoy on the Island of Hvar, Croatia

Hvar Town: Hike to the castle at the top of town for a great photo opportunity. Peek into chic shops surrounding the main square and, in the alleyways, behind. Tucked into those alleyways are some excellent restaurants. Little Kiosks near the tender docks have many lavender souvenirs. Enjoy chic nightlife at Hula Hula bar, and later at nightclubs Carpe Diem and Carpe Diem Beach.

Wineries: Both Tomic Wine Boutique and Duboković d.o.o Winery in Jelsa offer wine tastings of their wines in unique and traditional settings.

Franciscan Monastery: Located on the harbor beside Hvar Town, this beautiful seaside monastery is an oasis of calm in otherwise very busy chic town. 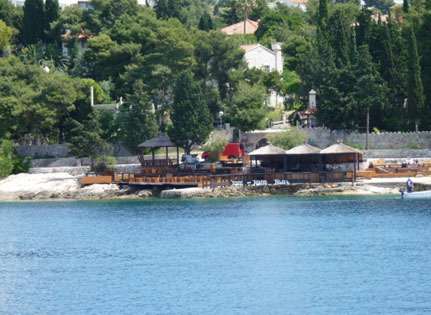 Considered one of the sunniest locations in Croatia and one of the most beautiful islands in the world, visit Hvar and explore the historic towns, and enjoy the green lush countryside and the crystal clear clean waters surrounding this island on a yacht charter in Croatia.