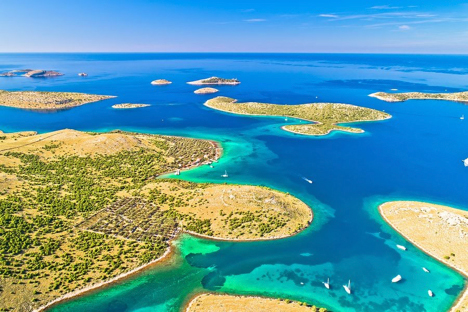 The Kornati archipelago of Croatia, also known as the Stomorski islands, is located north of Split, just off of Sibenik on the coast. In a sea area of 114 miles, the archipelago is comprised of approximately 140 islands and bits of land. The archipelago is named after the largest island Kornat. For those that really want to be away from it all and have anchorages to themselves, this is the perfect cruising area on a Croatian yacht charter. 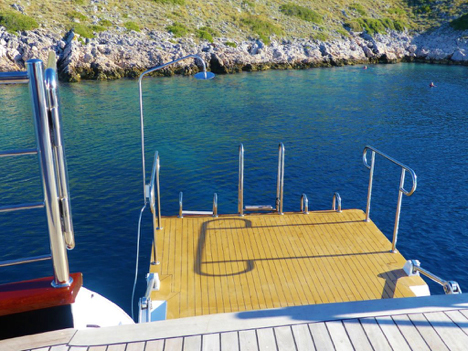 George Bernard Shaw fell in love with this group of islands writing: “On the last day of Creation God desired to crown His work, and thus created the Kornati islands out of tears, stars and breath.“ 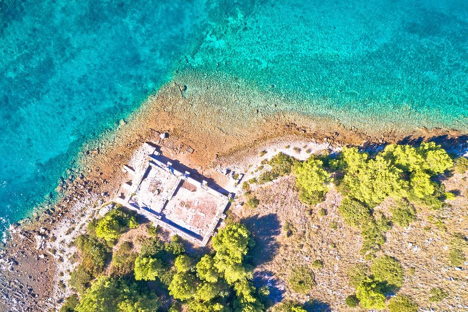 Ruins of a House on a Kornati Archipelago Island

In 1980, much of the Kornati Archipelago was declared a Croatian National Park. There are no permanent settlements in the archipelago and any houses seen are vacation houses or houses used for shelter for those tending to olive, and fig groves or vineyards, all owned by Croatians from the mainland. Water versus land makes up the largest part of the park area. Historically, there were settlements in these islands, probably first in the Neolithic Age as evidenced by archeological excavations, and then Illyrian settlements as found on Kornat Island. Romans settled in the islands with many remains found including mosaic floors of Roman villas, many other buildings and evidence of stone quarries. 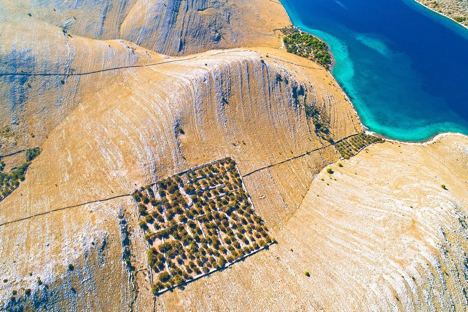 Olive Grove on an Island in the Kornati Archipelago

Originally, these islands were thought to have been covered in oak trees and evergreens, however there was serious deforestation over the many centuries for wood for building and burning for heat, erosion, and overgrazing by sheep and goats, for which in the grazing areas the scrub was periodically burnt. This created the somewhat barren landscape of these islands today, where rain is carefully collected for needed water. The little bit of agriculture in the islands is mainly olive and fig trees, and vineyards. One of the reasons for the island area becoming a National Park was to protect and rebuild the underwater marine life from overfishing. The waters were also once filled with sponges and these waters were considered one of the richest sponge growing areas in the Adriatic. One hopeful sign of the resurgence of marine life is a large group of dolphins that live in the waters that love to swim in the wake created by the bows of yachts when underway. 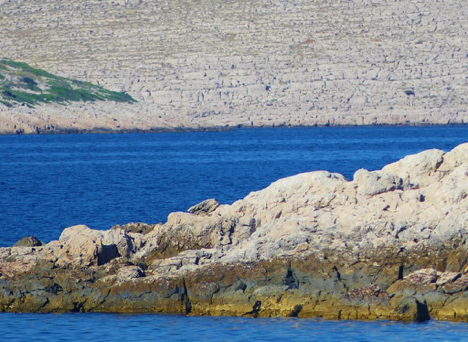 Today, due to the typically karstic terrain created from the dissolution of limestone, dolomite and gypsum that make up these islands felt to have risen from the ocean floor, the islands are filled with cracks, caves, grottoes and rugged cliffs, with the mainly white cliffs showing starkly beautiful against the blue skies and lovely water. Anchorages are filled with beautiful clean clear blue green water. Within the Kornati Archipelago is a naturally occurring stretch of protected very calm water between Kornat Island and a chain of islands on the other side. In this large stretch of calm water are dozens of anchorages, and the entire area is great for swimming, sea kayaking and playing with other charter yacht water toys.

Enjoying the Kornati Archipelago is only possible by private yacht. There are no hotels or resorts, and only one marina. There are around 20 restaurants, most of which are accessed by sea, with most offering fresh fish and the islands’ traditional aromatic lamb. Of note: Konoba Idro (Lavsa Bay) has plenty of mooring balls , a long jetty and good scampi. Restorant Piccolo ( Smokvica Bay) and Konoba Piškera (Piskera Island) are also considered excellent. All serve very fresh fish. 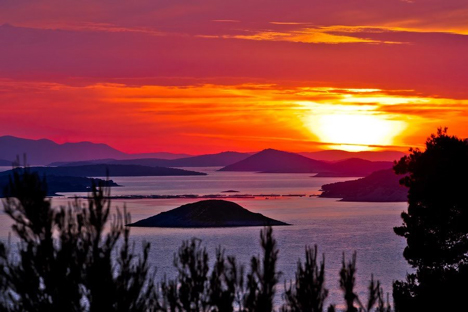 Sunset over the Kornati Archipelago

It is the beauty of the now barren stark landscape with white cliffs, where the occasional sheep or goat can be seen grazing, and the extremely clean clear water, that draws many to cruise in this archipelago. With very few people cruising in these islands, many anchorages are totally deserted for the true ability to escape from it all on a Croatian yacht charter.