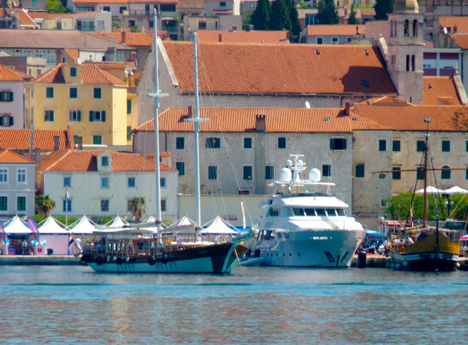 Visit Sibenik on a one week charter which could start and end in Sibenik or start and end in Split, and include Sibenik. Considered the “Gateway to the Kornati Archipelago”, a beautiful stark National Park, Sibenik has an extensive Old Town full of winding walking streets, paved in marble slabs, a beautiful cathedral, and a City Museum in a 14th century Rector’s Palace. While towering over the city are several old fortresses and a graveyard. Sibenik also has something for Game of Thrones fans as well as several scenes were filmed in and around Sibenik. Sibenik is a great stop or an excellent starting and or ending location for a yacht charter when chartering yachts and exploring Croatia north of Split. 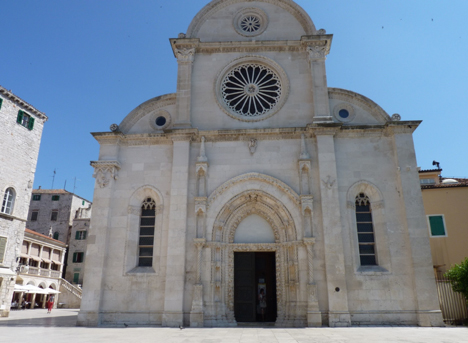 While Sibenik did see fighting between Serbian and Croatian forces in the recent Croatian War for Independence, luckily all of the damage has been repaired. Today when cruising into the harbor, the dome of the 15th century Cathedral of St. James can be seen poking up from behind the buildings on the harbor front. Today the Cathedral of St. James is a UNESCO World Heritage Site, famous for being built entirely from stone, and decorated with a remarkable frieze of 71 sculpted faces of men, women and children. The Cathedral is considered a combination of Gothic and newly emerging, at that time, Renaissance styles. One can see in the vaulting, façade and dome a transition from the gothic arch on the first floor to the rounded arch higher up in the building. Another UNESCO World Heritage Site guards the entrance to the harbor of Sibenik, the Fortress of St. Nicholas built by the Venetians between the 15th and 17th centuries. Only able to be seen on the inside by buying a ticket on an organized boat tour from Sibenik, otherwise, there are nice views from the top of the outside of the fort, and the fort is a nice photo op when cruising by in on your charter yacht in and out of the harbor. 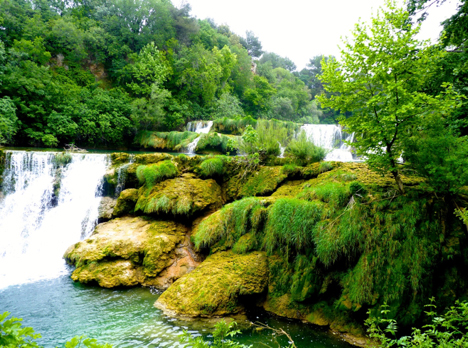 Sibenik sits at the head of the mouth of Sibenik Bay however at the northern end of the bay is the terminus of the Krka River at the village of Zaton after the river tumbles down a series of falls called Krka Falls in Krka National Park. This is beautiful area although very heavily visited by tourists, especially large groups in tour buses. Visiting Krka Falls is easy to do from Sibenik. Also part of Krka National Park is Visovac Monastery on manmade Visovac Island reachable from shore by National Park boats. On arrival on the island, National Park Guides provide a nice tour of the island and church which is well worth seeing, and from there a quick visit to Krka Falls is easy to do by land. Visiting by water requires accessing Zaton if on a motor yacht, as there is a bridge that a sailing yacht may not be able to pass under, and at that point transferring with a ticket to a National Park boat with a mass of humanity to walk around Krka Falls, only to be able to return by another National Park boat after waiting in line to find an available seat. The area of Zaton and the National Park land around Krka Falls saw heavy fighting during the Croatian War of Independence. 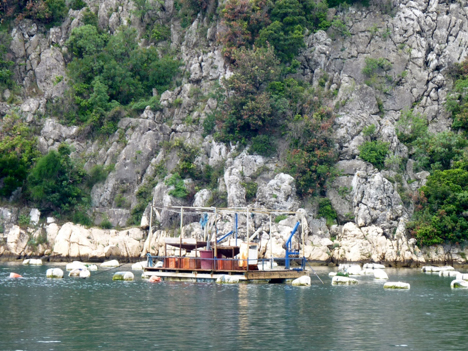 In the bay between Zaton and Sibenik, as fresh water is mixing with salt water, which is the perfect blend of brackish water for growing shellfish, several shell farms growing oysters and black mussels can be seen floating on the water.

Sibenik is the only Croatian city settled originally by Croats. The city did change hands over the centuries but was Croatian in origination and not only is well worth visiting, but also is a stopping point to visit Visovac Monastery and Krka Falls (best by land) and then head by sea to the Kornati Archipelago when chartering a yacht in Croatia on a yacht charter itinerary cruising north of Split. 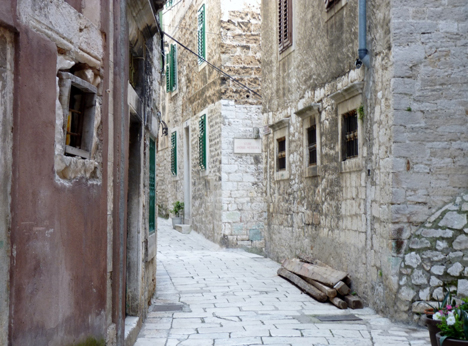 What to See and Do in Sibenik, Croatia 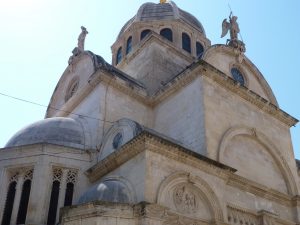 Cathedral of St. James: A UNESCO World Heritage site, this is a gem of a cathedral, where architectural transitions in style can clearly be seen. Unique to the Cathedral on the exterior is the frieze of 71 sculpted faces of men, women and children said to be carvings of various Sibenik locals of the time.
Šibenik City Museum: Housed in a 17th Century Rector’s Palace, located on the harbor front, the museum houses a permanent collection of artefacts that date from prehistory to the end of the Venetian period. All exhibits have English translations.
Old Town: An extensive area of shops, bars, restaurants, and boutiques, this area is right behind the main quay anchored on one end by the Cathedral of St. James.
Medieval Monastery Mediterranean Garden: A nice little garden in the shape of a cross filled with herbs and an ice cream shop. This is a good spot to stop for a rest when climbing the myriad of steps on the walking streets up into the hillsides of Sibenik.
St. Anne City Cemetery: Perched at the top of many steps and walking paths overlooking the city of Sibenik, reaching the cemetery is a great hike for those wanting exercise. Once reaching the cemetery, the grounds offer a great view and a great photo opportunity of the city and harbor.
St. Lawrence Church and Monastery: The 18th century Monastery has a nice garden with fountains, and a small café and is located part way up the hillsides behind the harbor front of Sibenik. The gardens are filled with roses and herbs and are a nice place for a rest, drink and perhaps lunch or a snack when wandering around and hiking up the hillsides of Sibenik.
Game of Thrones Filming Locations: Old Town Sibenik itself was the filming location for the city of Braavos. St. John Fortress was used in certain scenes, and the Cathedral of St. James was the filming location for the Iron Bank in Season 5, Episode 9 ‘The Dance of Dragons’ where Ayra Stark abandons a mission for the Faceless Men and instead follows Mace Tyrell and Meryn Trant as they pay a visit to Tycho Nestoris to negotiate on the repayment of the crown’s massive debts. In another episode that takes place in Braavos, relive the scene where Arya Stark follows locals in the square in front of the Cathedral. Scenes that take place in the House of Black and White were filmed on a sound stage, however much of Arya Stark’s Braavos explorations were filmed in the stone-walled alleyways and plazas in Old Town Sibenik. 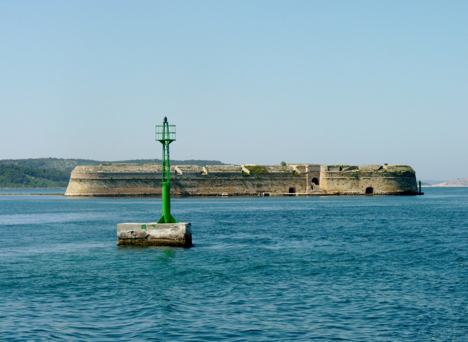 St. Nicholas Fortress: Built by the Venetians between the 15th and 17th Centuries to protect Sibenik by guarding the mouth of the bay, now renovated, the interior can only be seen by buying a ticket on a tour boat out of Sibenik. The exterior can be seen along with the views from the top of the Fortress just by landing at the Fortress by ship’s tender or by accessing the Fortress from land.