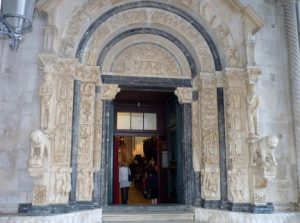 Board your yacht in Trogir, a small town outside of Split. After settling in, set out to visit Old Town Trogir. Trogir stands on the foundations of an ancient Greek settlement, on a small island, connected to the mainland by bridges. This fascinating, medieval town is a favorite stop offering restaurants, markets and beautiful sights, including the 15th century Trogir Chapel and the 13th century portal by the master Radovan. The yacht marina is situated on another small island opposite the old city walls, which is an easy walk over a bridge to the old town. Overnight. 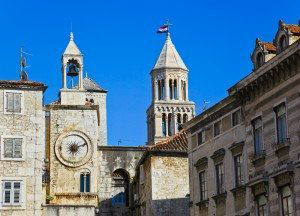 Head back into Trogir in between 8:00am and 10:00am and you might be lucky enough to hear the local men Klapa Singing, a unique part of Croatian culture that was derived from religious Gregorian chants, where men sing a Capella traditional Croatian folk songs. After cruise to Split to dock in the main harbor. Dating from 300 AD, the ancient city of Split took over from Salona as the metropolis of the Roman province of Dalmatia. The medieval town developed out of the Emperor Diocletian’s palace, which is recorded as a UNESCO “monument of universal importance”. Other sites to visit include the Peristyle, Jupiter’s Temple and Visesllas’s Baptistery. Split is within easy reach of the off-lying islands. This is a great location to have lunch ashore, perhaps at the high-end restaurant Nostromo’s (reservations recommended) or Bepa’s, known for casual Croatian food, both are very close to Diocletian’s Palace. Later in the afternoon cruise to the lovely anchorage of Milna on the island of Brac. Overnight. 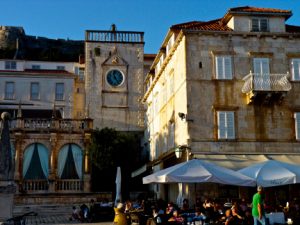 Cruise to Hvar. Only able to be visited by sea, Hvar has been a port for seafarers throughout seafaring history, with each civilization leaving a mark on the face of this island with many of the historic buildings and ruins still remaining. There are four main towns on the island, Hvar Town, Jelsa, Stari Grad, which is the main seaport on the island, and Sucuraj. And surrounding the island are beautiful beaches, and anchorages, all with crystal clear waters. Hvar town is the “San Tropez” of Croatia, and is now the chic spot to see and be seen with a very active nightlife including a disco up on the hills behind town in an old Venetian fortress, Hula Hula Bar, and Carpe Diem Nightclub. Cruise to Hvar Town, heading ashore to explore the town, and visit the chic shops. There are the ruins of a castle overlooking town which offers a great photo op of Hvar Town below. Visit the little Kiosks on the edge of town for souvenirs of lavender, as Hvar is the “Lavender Island”. Spend the day exploring what the city can offer. Overnight. 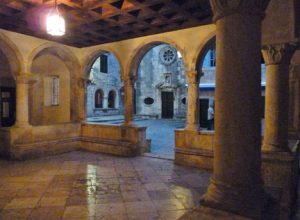 Explore Korcula, a large island just off the coast of Croatia; south of the island of Hvar and off the coastline between Dubrovnik and Split. There are eight villages on the island of Korcula, including Korcula Town, which is the main town on the island with a population today of around 3000 people. The island of Korcula is known for vineyards and wine production, olive trees and olive oil production and large fruit tree orchards. Of course, fishing is also an important industry for the year around locals on the island. Be sure to visit Korcula Old Town, a medieval walled city, birthplace of Marco Polo, and visit the museum inside the city walls. Stop for a drink in the bar at the top of a tower where drinks are brought up by pulley from the restaurant below. Both Marco and Polo are and always have been very popular names in the Korcula area. Overnight. 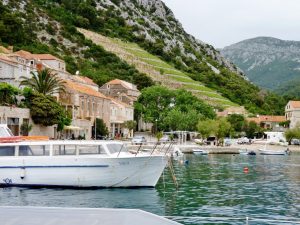 Vineyards on the Peljesac Peninsula

Cruise across the water from Korcula, stopping in the island of Vrnik for a refreshing swim and lunch. After lunch cruise to Orebic on the mainland. Take a taxi to visit the Saint Hills winery on Peljesac Peninsula, said to have perfect soil for wine grape growing. Saint Hills offers either a small food pairing tasting menu or a full 7 course dinner tasting menu featuring their wines (reservations required). Overnight in a nearby anchorage. 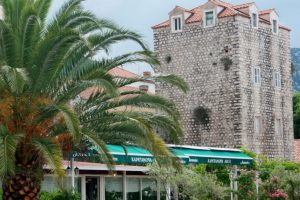 Head to Ston, the salt capital of Croatia. In the 1800’s, Ston supplied a huge amount of the salt needed for both Croatia, and other countries. The Ston sea salt made on the salt flats was felt to be especially fine. After visiting Ston, cruise around to Mali Ston, where Shell Farms can be seen as the brackish water at the head of Ston Bay is said to be perfect for growing oysters and mussels. Anchor off Bota Sare Restaurant where their own oysters and mussels are prepared in many ways, in accordance with old Croatian recipes. For non-fish and shellfish eaters, there are many other choices on the menu. Overnight. 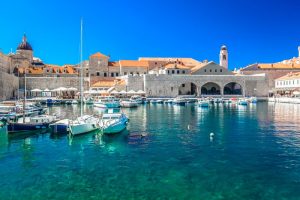 Cruise to Dubrovnik, stopping at a marine outside of Dubrovnik, to visit Dubrovnik Old Town, which can only be visited by land. A van will be arranged to carry you to one of the Old Town Gates, surrounding Dubrovnik Old town, the “jewel of the Adriatic”. Dubrovnik was an independent, merchant republic for some 700 years and has enchanted the wealthy, the powerful, the artist, and of course, the sailor, throughout it’s remarkable history.

The old town, completed in the 13th century, remains virtually unchanged. Tall ramparts surround and there are only two entrances to the old town which lead to the Stradun, the city’s promenade. In 1991, the Serbs shelled the city causing considerable damage, but thanks to local efforts and international aid, the old town has been restored to its former beauty. Explore Old Town, visit the Old Port perhaps stopping in a café along the waterfront for a cold drink. For the hardy, take a stroll along the city wall ramparts. And if wanted, there are a variety of restaurants in which to have lunch. Later in the afternoon cruise to a lovely anchorage along the coast of Croatia. Overnight. 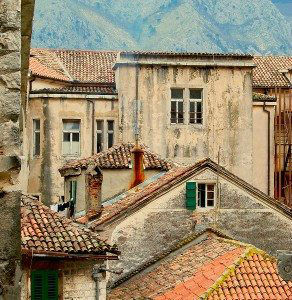 Day Eight: Clear Customs in Cavtat and cruise to the Kotor Fjord in Montenegro. This is the most southern fjord in existence and along the sides, the micro climate of the fjord allows tropical flora and fauna to grow. Head first to Perast, part of the Kotor UNESCO National Heritage Site, which is fronted by a church and a monastery on two tiny islets. Both islets can be visited, or anchor and head ashore for a quick walk through the tiny historic town of Perast and enjoy lunch at Taverna Skolji (Reservations Recommended). After lunch cruise to the historic walled city of Kotor, whose ramparts can be seen crawling high into the hillsides behind Old Town. Explore Old Town, a smaller village than Dubrovnik Old Town, however with an extensive system of ramparts, which for the hardy can be hiked along the top for fabulous photo ops of the walled town and bay below. Overnight. 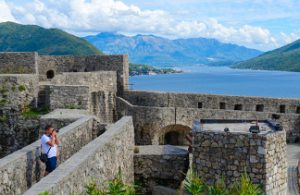 In the morning cruise down the Fjord, stopping in Herceg Novi for lunch. There is a small little Old Town, with a Clock Tower and Citadel worth a quick visit. After clear back into Croatia in Cavtat, stopping in Cavtat or in the area to overnight enjoying the beautiful water of Croatia. Overnight. 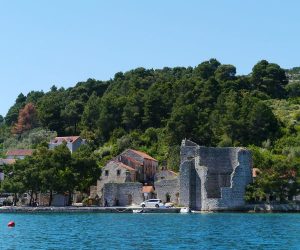 Leave early for the Island of Mljet. One of the larger islands along the stunning Croatian Coast, the island was once one of the biggest producers of olive oil in the Med. Mainly forested, Mljet is a very green island with much of the northern end of the island protected as part of a Croatian National Park. Considered one of the nicest islands in Croatia, it is surrounded by beautiful waters. Odysseus was fabled to have been seduced here by nymphs in Homer’s “The Odyssey”. Swim and have lunch at a little secluded bay and then on to Polace, (literally “palace”) to explore the ruins of a Roman palace. Cruise along a long-wooded inlet, part of a national park. At the end is a protected bay with restaurants which is a great place for a refreshing swim. Relax with dinner on board or ashore. 95% of Mljet is a National Park and there are bicycle trails and hiking trails throughout the area. Be sure to hike or cycle to the nearby lake, where a National Park boat can take you across to the now abandoned monastery and church to explore. Overnight.

Cruise to the anchorage of Vela Luka on Korcula, and relax for the afternoon. In the evening, head ashore to Gulin Farm, (Reservations Required), a traditional Croatian Homestead Restaurant, where all food is grown on the farm or caught from the sea alongside, and prepared the traditional Dalmatian way under the Peka Bell. This is a unique experience, and perhaps after, the men will Klapa sing. 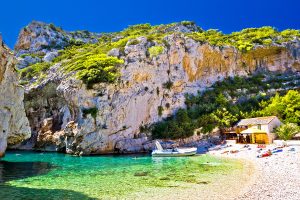 From Korcula cruise to the Island of Vis. Lying 30 miles off the Croatian mainland, Vis is the remotest of the populated Dalmatians, the archipelago of 1,185 islands that pepper the eastern Adriatic like seeds scattered by the sirocco wind. Like many of its neighbors, it has always boasted the raw materials necessary to become a quintessential Mediterranean bolt-hole: miles of pebbled beaches, grape-and-olive agriculture and seafood by the netful. But it was a unique quirk of history that set it on course to fulfill the slogan’s halcyon promise, as Vis is the far westerly border of Croatia, and during WWII was the far westerly border of Yugoslavia, and it was on Vis that the Yugoslavian Resistance movement under Tito along with the British waged war. After WWII, the island was a military zone closed to the public for many decades until the 1980’s. This left Vis virtually frozen in time, and when the military vacated the island, they left all behind. Today, a popular Vis experience is the WWII tour (reservations required). Cruise to Komiza, the lobster fisherman’s village on Vis, where lobster pots can be seen piled up on the quay ringing the harbor. For those that like lobster, try Bako’s restaurant for dinner. (reservations required). On the Mediterranean authenticity scale, Vis strikes an exquisite old-school note, the perfect balance between amenity and low-key local charm. Overnight. 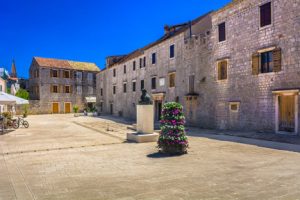 Cruise to Hvar Island to the harbor of Stari Grad. Said to be the old continually lived in village in the EU, this is a village packed with history. Stari Grad and Stari Grad Plain behind the town are a UNESCO World Heritage Site. Stari Grad Plain, is extremely fertile and has been farmed for the last 2000 years broken into the same sub plots ringed by rock walls that were built by the Greeks. Overnight. 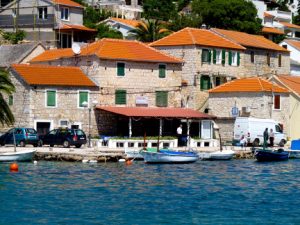 Cruise to Solta Island, where any number of anchorages are available with little villages to explore to stop for lunch and a great swim. The bay of Rogac and Necujam on Solta are lovely. The economy of the island is based off the vineyards of olives and fruit, as well as the fishing, which is quite good in the area. The quaint island has some of the most scenic views along the Adriatic Sea. After lunch cruise to Trogir, perhaps to the Promenade Quay right alongside Trogir Old Town for a last dinner on board or in Trogir Old Town, then watching life go by on the Quay back on board.