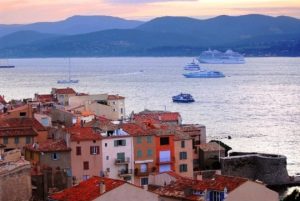 With a magical mystical light that has drawn artists for centuries, San Tropez was a sleepy little fishing town until Bridgett Bardot arrived in the mid 1950’s. Today Saint Tropez is a chic yacht charter port where luxury Mediterranean charter yachts line the main harbor, Vieux Port, while other yachts anchor just off of the harbor entrance, so that guests on board can walk the main quay around the harbor, sit in a café for a drink, shop in the various boutiques, and enjoy a very upscale night life. 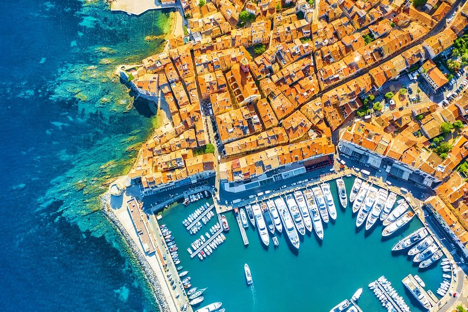 Saint Tropez was a sleepy fishing village and a military stronghold for centuries and was the first town to be liberated from the Germans in WWII as part of Operation Dragon. This sleepy village was woken up in the 1950’s when Bridgett Bardot came to town as the star of the movie “And God Created Woman”, filmed around San Tropez. Bridgett Bardot was the making of San Tropez as the very chic village that it is today, and put Club 55, located on Pampelonne Beach, which was a little family run eating location, on the map. 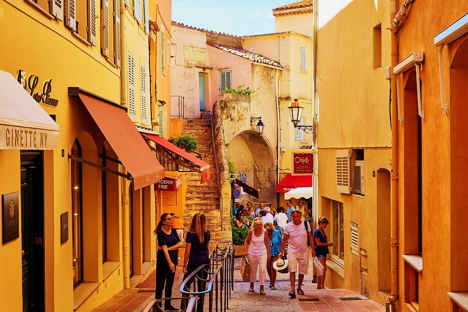 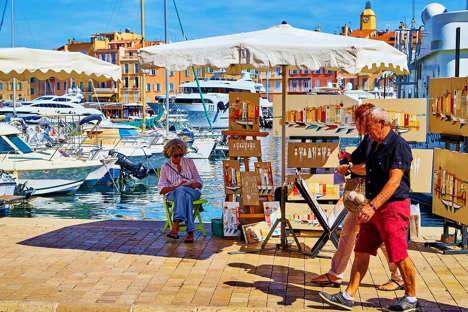 Artists on the quay in Vieux Port

The Vieux Port is basically the center point of the village, filled with activity. Enjoy sitting outside in a little café on the quay surrounding Vieux Port, people watching, just watching life go by, or watching what a local artist might be creating on a nearby easel. Here is located a statue of Bailli de Suffren, a 17th-century naval hero, cast from a 19th-century cannon. Behind Vieux Port, in the early morning, is Place aux Herbes, a market square where you can feel like a real local perusing flowers, fruits or vegetables or checking the daily catch of fresh fish at nearby Halle aux Poissons.

The special light in San Tropez was first discovered in the late 1800’s by Paul Signac who built a compound and invited other painters like Matisse, Pierre Bonnard and Albert Marquet to come to Saint-Tropez to paint. Matisse painted one of his most important works “Luxe, Calme et Volupté” in Saint Tropez where the modern painting styles of pointillism and Fauvism were developed. The special light in San Tropez also attracted the next generation of painters such as Bernard Buffet, David Hockney, Massimo Campigli, and Donald Sultan who all lived and worked in the village. Today, Stefan Szczesny anchors the artistic world in San Tropez. 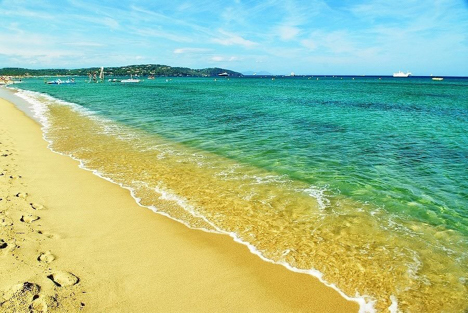 Saint-Tropez is not just a chic village; all around San Tropez are many beautiful beaches, including Tahiti Beach which is now topless, and Pampelonne Beach where yachts anchor off for guests to enjoy the beach, swimming, or perhaps head ashore in the ship’s tender for lunch at Club 55. There is a coastal path around St Tropez which is still quite wild, and very much reflective of the local flora. Hike past the large seaside mansions, ending at the beaches with your choice of restaurants for a terrific seaside meal. 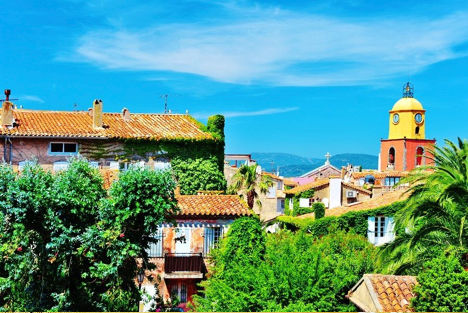 What to See and Do in San Tropez, France 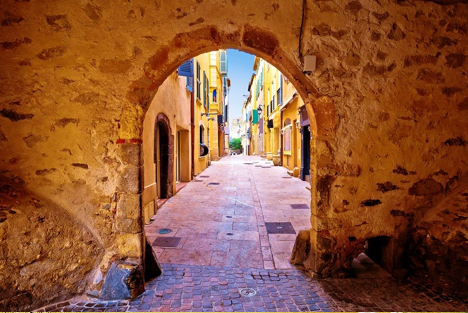 La Ponche: The original old center of St. Tropez where the fishermen lived. Wander the walking streets filled with old building facades reflective of various colors, enjoying cafes, bars, shopping and eating.
Les Caves du Roy at the Hotel Byblos: Considered one of the “it” nightclubs in San Tropez, this club is filled with the rich and famous dancing to Mixmaster DJ Jack-E’s music.
Club 55: Started and still owned by the Colmont Family in 1955 who where asked to cook for the film crew of “And God Made a Woman”, causing the Colmont’s to transform their fishing shack where they fed the occasional fisherman to a restaurant. Bridgett Bardot and her husband Roger Vadim settled in marking the establishment as a favorite, and chic Club 55 was born. Today, with yachts anchored out in front off of the beach and sun lounges available, Club 55 has dining both inside and outside, and features very well prepared simple food using the best ingredients.
Saint Tropez Citadel and Maritime Museum: Built in the 17th century to protect the area from pirate and other attacks, its dungeons now house the Maritime Museum. Built on a promontory in a hexagonal shape, the view from the citadel is spectacular.
The Coastal Path: Around St. Tropez is a lovely coastal path which is left in a very natural state, so wear stout walking shoes, and bring bottled water as the path can be rough in places and there are no kiosks. Hike past the seaside mansions ending up on the beach, or start at the Cap Camarat Lighthouse and end on the beach. Either way, the reward at the end is to end on the beach where a choice of great restaurants with fresh seafood await.
Annonciade Museum: Created in 1922, this art museum not only has works by famous artists, especially Impressionists, but also traces the history of San Tropez which developed into a famous artist’s center in the early 1900’s starting with Paul Signac who arrived in 1892 aboard his yacht L’Olympia. The museum building (the old Chapelle Notre-Dame de l’Annonciade) dates to the 16th century.
Nikki Beach, Beach Club and Restaurant: Located on Pampelonne Beach, and the sister establishment of a beach club and restaurant with the same name in St. Barths, there is a fresh water pool, indoor and outdoor dining, beach sun lounges, and a constant party vibe. Nikki Beach starts with the fun time atmosphere at lunch and winds down in the wee hours of the morning with night time party fun featuring world class DJ’s and live entertainment.
Place des Lices: St. Tropez’ central square filled with plane trees, and cafes and ringed with shops and restaurants. Twice weekly is a huge market including stalls ranging from fruit and vegetables to chic San Tropez sandals.
Chapelle de la Miséricorde: Built in 1645 by a religious order called the “black penitents”, this church is home to the glazed bell tower that is a fixture in the San Tropez skyline.

Docking on a yacht charter in Vieux Port is not always a guarantee, as the harbor is small, and there are a great many Mediterranean charter yachts so that there are more dockage requests than space; however, there are locations to anchor near San Tropez, and there is always Pampelonne Beach where your charter yacht can anchor in a lovely beach setting