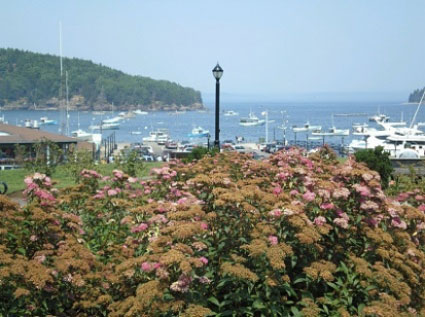 Bar Harbor, Maine, a quintessential Maine coastal village perched on the eastern shore of Mt. Desert Island, is a must stop visit by crewed yacht charter on a yacht charter of New England when cruising through “Down East” Maine. Facing a large harbor and surrounded by Acadia National Park, Bar Harbor offers something for everyone. Stop in Bar Harbor on a crewed yacht charter, and be the first to see the sunrise in the United States on any given day, from the top of Mount Cadillac in Acadia National Park. Visit the museums and explore the many shops filled with typical Maine souvenirs. And, of course, enjoy a feast of Maine lobster choosing from a selection ranging from a simple but tasty lobster roll to a full lobster boil. All of this and more is available when sailing into Bar Harbor on a crewed yacht charter.

Originally, when settled in the 1700’s, this town was named and known as Eden, not being re-named Bar Harbor until 1913. By the late 1800’s, Eden rivaled Newport, Rhode Island, as a “Gilded Age” summer playground for the very wealthy, with huge mansions and coastal hotels built to enjoy the cooling summer breezes off the Atlantic Ocean.

In October of 1947 a disastrous fire burned nearly half the eastern side of Mount Desert Island. 67 palatial summer houses on Millionaires’ Row, five historic grand hotels and 170 permanent homes were destroyed. The town of Bar Harbor survived and exists today much as that which remained after the fire. 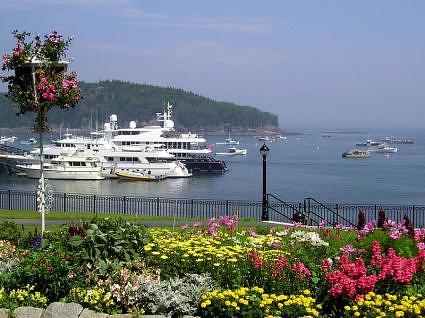 What to See and Do in Bar Harbor, Maine

Acadia National Park: Surrounding Bar Harbor, and certainly a large draw for visitors, is Acadia National Park, with 41,000 acres of glacier carved mountains, valleys, lakes and beaches. Created by donations from ecologically concerned summer residents from “Millionaire’s Row”, Acadia National Park was the first national park created east of the Mississippi. There are 120 miles of hiking trails, through terrains for all endurance levels. And for those who prefer to drive or bicycle through the lovely natural terrain, there is the 27-mile scenic Park Loop Road including beaches, pristine lakes and mountains.

Carriage Roads: To open Acadia National Park to the public, John D. Rockefeller, Jr, donated about one third of the land that now comprises Acadia National Park, and built 45 miles of crushed stone roads, now known as trails. Local workers quarried granite from the island to build 17 stone bridges along the trails. Great care was taken to preserve the natural landscape, including trees, wild blueberry bushes, and other flora and fauna, so that the trails blend in naturally with the surroundings. Today walk, hike, or bike along the trails, provided as a public gift so that all can enjoy the great beauty of the natural life in Maine.

Millionaires Row: In the 19th century, Bar Harbor, Maine was a premier summer resort, with cooling summer breezes, featuring the largest resort hotel at that time in America. Nearby, the quickly dubbed Millionaire’s Row area along ocean front West Street, became synonymous with Bellevue Avenue in Newport, Rhode Island, as a location of lavish summer homes. West Street featured a line of private summer mansions for families with last names such as Rockefeller, Vanderbilt, Astor, and Mellon. For an ocean side view of these mansions, only available to meander at low tide, take the Bar Island Walk, an interesting less than one-mile long walk across the shell-covered sand bar connecting Mt. Desert Island to Bar Island

The Historical Museum: Open afternoons, this museum is home to an exhibit of photographs, clothing and other historic items from the “Gilded Age”.

Abbe Museum: Maine is an area rich in Native American culture and history, which is celebrated at the Abbe Museum. Located in the heart of town, this museum, associated with the Smithsonian Museum in Washington, DC, highlights the history and culture of the Native people in Maine, the Wabanaki.

Bar Harbor Whale Museum: Located on West Street, the Bar Harbor Whale Museum is free to the public, being supported entirely from donations, and is about marine life in Maine, specifically whales. The large whale skeletons, and other natural exhibits of marine mammals, stranded locally, were prepared by the students and staff of the College of the Atlantic. 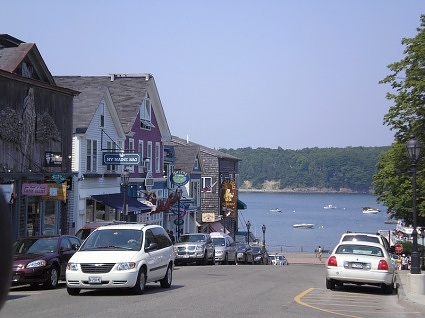 Bass Harbor Head Light: Built in 1858, and still fully operational, this lighthouse is located on the southwestern reach of Acadia National Park; and warns mariners about Bar Harbor Bar, and guards the southern entrance of Blue Hill Bay. Now on the National Historic Register, the U.S. Coast Guard mans the station, which is not open to the public; however, for a closer look, visitors are welcome on the grounds. 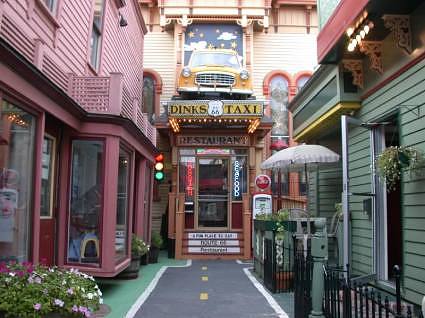 Include Bar Harbor as a stop on your yacht charter itinerary of “Down East” Maine, and wander the streets of this historic town, visiting the various shops and museums, stopping for a taste of lobster and perhaps to sample the brew of a local microbrewery. And, enjoy the outdoors surrounding Bar Harbor where mountains meet the sea in Acadia National Park.