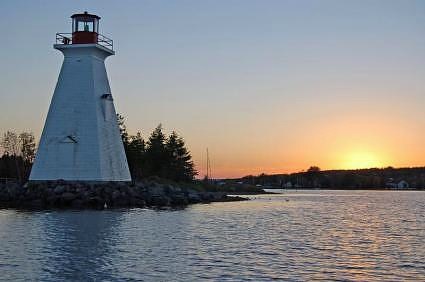 The Bras d’Or Lake, in Nova Scotia, Canada is the warmest body of salt water north of South Carolina, offering great swimming and cruising. The Bras d’Or Lake is an excellent cruising location for crewed yacht charter and the waters are teeming with fresh fish and shellfish. Alexander Graham Bell discovered the beauty of the Bras d’Or Lake in 1885 and in 1886 he and his wife Mabel Hubbard Bell built a large summer home called “Beinn Bhreagh” on a point of land jutting into the lake, just outside of Baddeck, Canada. Here Bell also built a laboratory where he conducted many of his experiments. The estate of Beinn Bhreagh is still privately owned by the family, however a very good museum of the life, work and inventions of Alexander Graham Bell is close by in the city of Baddeck along the shores of the Bras d’Or Lake. The Bell family enjoyed the lake waters as well, sailing on their yacht Elsie, and at one time, during one of Bell’s experiments with hydrodynamics, Elsie held the record for the fastest time moving in water. 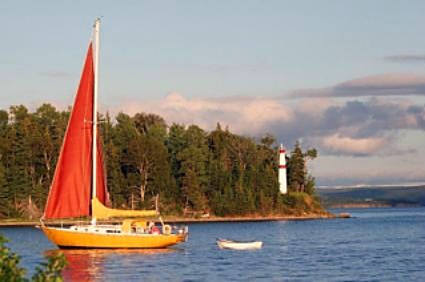 As Canada’s only inland sea, the Bras d’Or Lake covers over 360 square miles, sitting right in the middle of Cape Breton, and is still as pristine and lovely as it was when Alexander Graham Bell was drawn to these shores. Sometimes referred to as the Bras d’Or Lake(s), this body of water is divided into a northern and southern basin, connected by the Barra Straight. The waters support a large population of salt water fish and shellfish including lobsters and oysters. The surrounding hills are largely unpopulated and have become the home and nesting grounds for Egrets and Bald Eagles. The Bras d’Or Lake Region is considered so lovely, especially during sunset, that Bras d’Or literally translates into “Arm of Gold”.

There is a small northern entrance to the lake from the Atlantic Ocean; however, the best entrance into the Bras d’Or Lake is on the southern end, through the St. Peters Canal, built in 1868, which is now a Canadian National Historic Site. Once inside, a calm oasis of water is found for comfortable cruising. As the lake is relatively shallow, the water temperature warms quickly under the sun resulting in far less fog within the lake region than outside this region on the Atlantic coast. These warmer lake waters also invite swimming and other water sports, at normally unheard of northern latitudes for salt water swimming.

Alexander Graham Bell Museum and National Historic Site: Alexander Graham Bell was a prolific inventor, and besides the telephone, also invented many other devices that helped humanity including a number of hearing devices for those with hearing impairments. The man and his many achievements are celebrated in this excellent museum. Close by his summer home still stands, however is privately owned.

Bras d’Or Scenic Drive: See the lake coastline on this Scenic Drive that surrounds the Bras d’Or Lake, which includes by many of the highlights. While driving enjoy the panorama of the natural world where the highlands meet the lowlands and keep watch overhead for a sighting of the many Bald Eagles in this area.

Fortress of Louisberg National Historic Site: Be transported to the 1700’s in Canada by visiting this Historic Living Museum within Fort Louisberg. Here interpretive actors dressing in period clothing, bring life living within a fortress in the 1700’s to life. Watch while soldiers march, cannons blast, children play and women mend clothes on a typical 1740s day in the French fortified town.

Bird Island: Located in big Bras d’Or Lake, and aptly named, this island is a bird watchers dream, home to many birds, including over 300 pairs of the rare Atlantic Puffin.

Ekasoni Cultural Journeys: Learn about the native inhabitants of Cape Breton, the Mi’kmaq, their life and culture on a picturesque 2.4 KM trail on Goat Island in Eskasoni, one of the Mi’Kmaq reserves on Cape Breton. On an approximately two-hour tour with a native interpreter, learn traditional hunting and fishing techniques, basketry, traditional dancing and so much more. All tours must be pre-reserved.

Sydney Mines Heritage Museum: A short inland drive from the Bras d’Or Lakes, visit this museum with displays and exhibits about coal mining and steel processing from the 1850’s to the present. 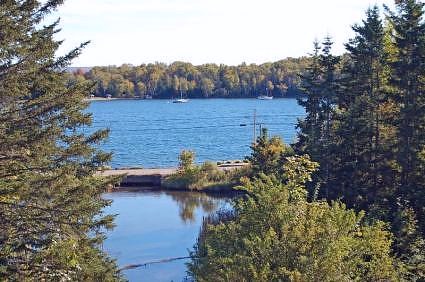 With the indented shoreline of the lake, it is not hard to find a private pristine anchorage, where oysters can be plucked from the bottom and eaten out of hand, and a refreshing swim in calm waters is just a drop over the side. Cruising in the warm and tranquil waters of the Bras d’Or Lakes is a jewel hidden in the middle of Nova Scotia waiting to be explored on your yacht charter.