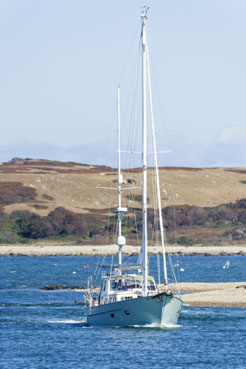 One of the Elizabeth Islands, stretching south from Cape Cod; Cuttyhunk is the southern most of this island chain. While sparsely inhabited and not well known today, Cuttyhunk has an important past in the history of New England. 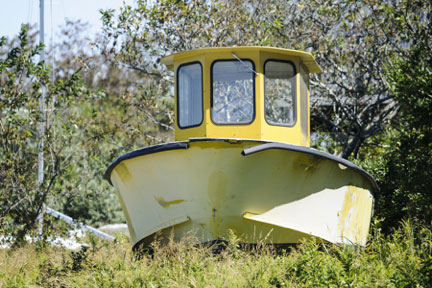 English explorers made landfall on Cuttyhunk in 1602, 6 years before Plymouth Plantation was founded on the mainland. In 1602, Bartholomew Gosnold, exploring the area with his men on board “The Concord”, built a fort on Cuttyhunk and stayed for a month, before returning to England. After, when settled again, Cuttyhunk was privately owned for several centuries by the Slocum family. In 1858, the Slocum family sold Cuttyhunk to islanders and the town of Gosnold was established and prospered.

South of Cuttyhunk are the treacherous rocks of the Sow and Pigs Reef, which is a hazard to yachtsmen today. The most notable accident recorded was the 1992 grounding of the ocean liner “Queen Elizabeth”. Given these treacherous rocks, the residents of Gosnold, in the 1800’s, established a lucrative business guiding whaling ships in from the Atlantic Ocean to the port of New Bedford; guiding at the height of whaling, as many as 11 ships a day.

These same treacherous rocks are also an excellent striped bass fishing location. Many world record striped bass have been pulled from these waters, which still draw fisherman today. In the last half of the 19th century, the powerful and wealthy in New York City established a very upscale fishing club on Cuttyhunk, pushing the island into a beehive of activity until the early 20th century, with a firework display every Fourth of July. 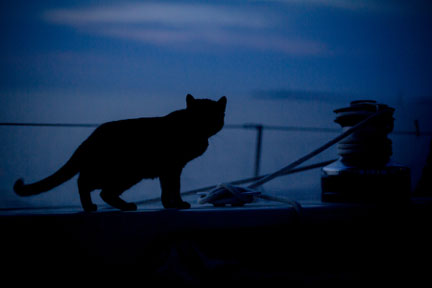 What to Enjoy on Cuttyhunk Island

Town: Today, at the eastern end of the island, is an excellent natural harbor, which, in the summertime, offers haven for visiting yachts. At the mouth of the harbor, mooring balls are available. This is a relaxing stop on any yacht charter, as life operates at a slow pace on this island. Head ashore as this is one of only a few of the Elizabeth Islands that are not privately owned. Ashore you will find about 130 homes, most of which are surrounded by flowering hydrangea bushes, brought over from the Azores by Azoreans that came for the whaling trade, that grow well and have lovely blue blooms, due to the salt air. In town, there is the market, raw bar and ice cream shop. Other buildings house the historical society and museum, library, town hall, Union Methodist Church (providing multi-faith services) and the school, in a one-room schoolhouse.

Fishing Club: One of only two locations available for an overnight stay, both of which offer a rather spartan experience, and the only location serving food, the Fishing Club was originally built in 1864 as a private club for the wealthy to experience the challenge of the outstanding striped bass fishing. Members included Jay Gould, and J. D. Archbold. Guests included Presidents Theodore Roosevelt, Grover Cleveland and William Taft.

Nature Preserve: Half of the island is set apart as a nature preserve which is home to a wide variety of birds.

Fish Dock: Home to a nautical store complete with fishing guides, a raw bar window, a water taxi stall and an ice cream stand. Here one can order lobsters to be freshly steamed and picked up later for a lobster dinner.
Church’s Beach: One of 5 beaches on Cuttyhunk Island. Nice sandy beach with calm water, which is great for children. There is no lifeguard on this or any Cuttyhunk Beach, so swim at your own risk. However, there are also few people, so the sea and the sand are virtually your own.

Shellfish farming for oysters continues on the southern end of the island and striped bass fishing is a large draw. However, the real draw is the beauty, peace and quiet offered by this tiny little remote island, hard to visit except on a crewed yacht charter.