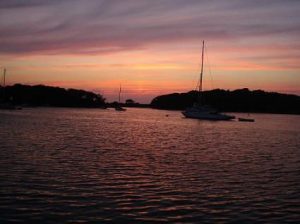 Sunset Across the Elizabeth Islands

Stretching southwest from the southern side of Cape Cod across from Woods Hole, visit the Elizabeth Islands in Massachusetts on a luxury yacht charter. This string of islands is made up of a series of islands and island groups, with Cuttyhunk the furthest island on the southern end of the island chain. Flanked on the northern side by Buzzard’s Bay and the southern side by Vineyard Sound, the Elizabeth Islands are between the mainland and Martha’s Vineyard and are to be reckoned with when passing either to the north or south of these islands, as passing to the north requires navigating through the strong current of Wood’s Hole, and passing to the south requires navigating around the Sow and Pigs Reef. However, another option is to stop in for a visit of these islands while on a yacht charter of the southern islands of New England. 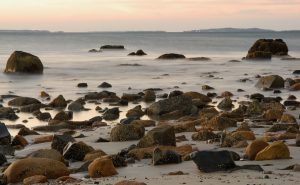 The Elizabeth Islands on the Horizon

Of the eight islands or island groups that make up the Elizabeth Islands, all but two are owned by the Forbes families, which are Cuttyhunk and Penikese. The rest of these Forbes family island holdings are private, except for Weepeckets, which can be visited. And yachtsmen are welcome to anchor in the various anchorages of these islands, even if stepping foot ashore is not encouraged. Following are the major islands that make up The Elizabeth Islands, said to be a total of 16 islands and islets, all named after Queen Elizabeth I when discovered in 1602. The string of islands may be named after Queen Elizabeth I, but the individual islands retain their Wampanoag Indian names.

Weepeckets: a series of small islands owned by the Forbes family, but open to the public. These islands were used as targets to practice with bombs, rockets, and machine guns from 1941 to 1957.

Pasque Island: owned by a subset of the Forbes family and covered in poison ivy, so rarely visited.

Nashawena Island: is owned by a different subset of the Forbes family and is used for grazing livestock.

Nonamesset Island: is the island nearest the mainland. In the northern end of the island, is the lovely natural anchorage known as Hadley’s Harbor, which is a great anchorage for visiting yachts.

Cuttyhunk: is a public island with approximately 80 people living there year around and a natural harbor for visiting by yacht.

On the privately-owned islands, several of the owning families have established summer compounds, which are tucked away and unknown, even though the size of these compounds makes this group of islands one of the wealthiest set of resort islands in New England.

Where to stop in The Elizabeth Islands on Yacht Charter

Hadley’s Harbor: on the northern side of Naushon Island, just across from the port of Woods Hole, is a beautiful, peaceful deep-water anchorage; a perfect location in which to spend a night. The harbor is well protected, and usually only fellow yachtsmen are also anchored in this harbor. Walking ashore is discouraged as Naushon is a private island. Tarpaulin Cove, also a deep-water anchorage on Naushon is said to be the last anchoring location of Pirate Billy Kidd, before being captured and hung in nearby Newport.

Penikese: has a lovely beach, and to get away from it all is a great location to stop for a day at the beach, sunning and swimming as only other fellow yachtsmen will be anchored off this beach if anyone is at all; you may have this beach all to yourself. The State of Massachusetts owns this island, which is both a bird sanctuary and home to a juvenile substance abuse home, for teenagers that have failed in other programs. For a few years, in the 1870’s, The Anderson School was operational as a marine biology center, which is considered the precursor to the Marine Biological Laboratory located in Woods Hole.

Cuttyhunk: is where most of the less than 100 year around residents of The Elizabeth Islands live. Only Penikese and Cuttyhunk are open to the public. Around these islands, keep your eyes out for wild harbor, harp and gray seals, as these rarely used waters are a perfect home for these marine mammals.

With the tide between Buzzards Bay and Vineyard Sound rushing through the gaps of land between islands, navigating in this area requires strong skills, but visiting The Elizabeth Islands is worth the time and effort on a yacht charter, as by private yacht is the only way to see most of the islands in this island chain.