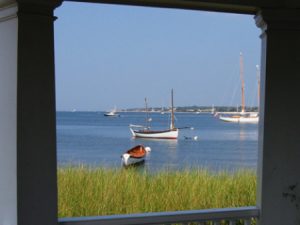 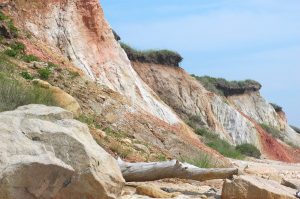 This idyllic summer haven was once an important commercial center, with whaling and fishing as the main occupations, in the 18th and early 19th centuries. In the late 1800’s the island, with its harbors, beaches, and scenic attractions, developed into a summer resort. It is divided into the towns of Chilmark, Edgartown, Gay Head, Oak Bluffs, Tisbury, and West Tisbury. Much of the island’s interior is set aside as a state forest. However it is the coastal towns that the visiting yachtsman can most easily see, simply by sailing into the harbors that are the main draw for a Martha’s Vineyard yacht charter visit. 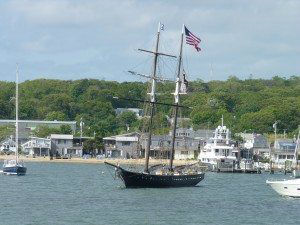 Wealthy Boston sea captains and traders formerly built large homes on Martha’s Vineyard and today the Vineyard has become one of the country’s most prominent summer havens, attracting Presidents, politicians, musicians, artists and actors. This makes people think of the island as glitzy, which is not the case. It is, rather, intentionally rustic with T-shirts and flip flops more the norm. The real charm of the island lies not only as a sailing destination but also as an escape from daily concerns enjoying the laconic summer days at the relaxed pace encouraged as an island lifestyle. 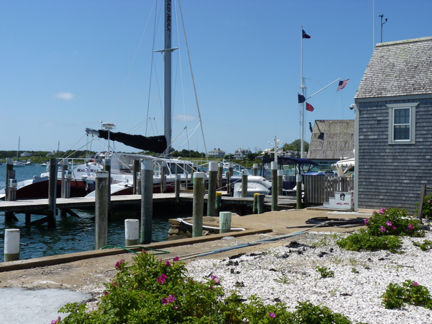 Everything to See and Do on Martha’s Vineyard, Massachusetts

Edgartown: the most popular town on the island as a Martha’s Vineyard yacht charter port, is a 22 nautical mile sail from Nantucket and a 48 nautical mile sail from Newport, Rhode Island, a popular starting location for a yacht charter cruise through the southern New England Islands. The Edgartown Yacht Club sits as a welcoming beacon at the opening of the harbor after the Chappaquiddick ferry landing, and hosts a popular sailing regatta every summer. Named after the young son of King James II of England that died in 1671, Edgartown has been in existence since 1642 with historic buildings clustered along cobbled streets, many featuring the famous New England architectural feature of the Widow’s Walk. There are great shops ashore, and it is a treat to explore ashore wandering down the many streets filled with colonial architecture, and lovely little garden plots with flowers peeking around fence posts.

The channel entrance by yacht cruising into Edgartown opens into Katama Bay, which is a large bay with mooring balls and some anchorage for visitors. There is very little dockage, and most yachting visitors use a mooring ball, which can be reserved in advance, and then either the ship’s tender for shore access, the harbor launch or water taxi service. The south end of Katama Bay has a barrier beach that sometimes connects the neighboring island of Chappaquiddick to Martha’s Vineyard. In 2007, a storm blew a hole in the barrier beach disconnecting Chappaquiddick Island from Martha’s Vineyard, and causing a 3 knot current to now run through the harbor. Only yachts up to a certain size can actually access Katama Bay. Those larger yacht, including charter yachts, must anchor outside of the channel entrance in the bay.

Oak Bluffs: The Vineyard is a well known African American resort stemming from a history of racial harmony on the island when black families started vacationing there a century ago. Oak Bluffs is the center of the Vineyard’s black culture. The Methodist Church sponsored summer meetings in Oak Bluffs starting in the mid 19th century that became so popular that soon permanent little summer houses were built. These little cottages that number in the 100’s are now called Gingerbread Cottages due to the ornate trim work and almost doll like size that many feature. A number are still passed down within the original building family. Oak Bluffs has a protected harbor, and is an excellent overnight yacht charter port. 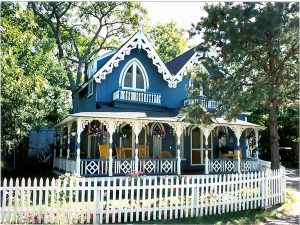 Menemsha and Gay Head: Featuring a lighthouse built in 1799, perched on the top of Aquinnah Cliffs, with the head land known as Gay Head, due to the gaily colored bluffs comprised of clay, striated in different natural colors creating a unique landmark that is fun to visit. Buried in the surrounding area of Menemsha are very large private homes, one might not even know where there, along with a very quaint fishing village which is at the opposite end of the spectrum from upscale Edgartown.

As the largest of the southern New England islands, you may want to cruise from harbor to harbor, visiting the three main towns on Martha’s Vineyard of Edgartown, Oak Bluffs, and Vineyard Haven, or tour the island by car or bicycle. Just like the other islands in southern New England, Martha’s Vineyard has miles of beaches, blooming wild beach roses and hydrangeas, and for the tourist business, which is very important to the island, many unique and different boutiques offering something for everyone. 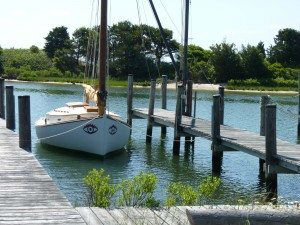