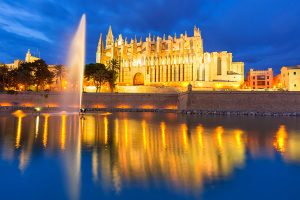 Join your yacht at Palma Club del Mar. Palma, the capital city of the island of Mallorca, has long been a yachting haven. Sitting on the Bay of Palma, the city is overlooked by the 13th century medieval Cathedral Santa Maria, a beautiful site at night when lit. Palma Old Town is right behind the cathedral, laid out in little streets at hint at the Moorish history.

Due to the great geographic position that Mallorca possesses at the entrance to the Mediterranean Sea and the protection offered by the Bay of Palma, the area was fought over for centuries and from the 900’s to the early 1200’s, Palma was under Muslim rule, reflections of which can be seen in the city architecture today. Next to the Cathedral is the Palace de l’Almudaina, whose interior gardens, laid out in Moorish style, are a great location in the late afternoon for a cooling visit. Castell de Bellver Castle, started in the 1300’s, is open and contains the Palma Museum of History. Within a 16th century fort is the Es Baluard Museum of Modern and Contemporary Art.

Shopping is terrific in Palma with many chic boutiques and shops, and many – given the Spanish interest in leather – shoe shops. Overnight dockside. Enjoy nightlife in Old Town and along the harbor front. 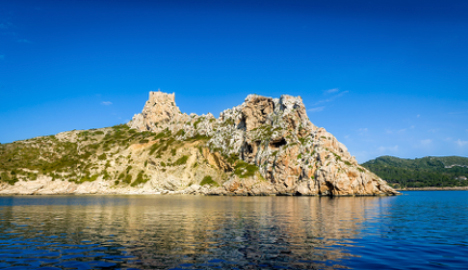 Today enjoy a day trip to Cabrera Island. A National Park island in a small archipelago just off Cabrera, this island has a long history; however, was closed as a military location from WWI to the 1980’s. In 1981, the island and the entire Cabrera Archipelago were declared a National Park.

For bird watchers, visiting this National Park is a must. Due to being a National Park, with protected waters, expect to see dolphins, sea turtles and sometimes whales. To reduce any human impact only a one-day pass is allowed to visit the archipelago. Enjoy hiking, swimming, snorkeling, and visiting the small castle and lighthouse ashore. Return to Palma to overnight dockside at the Real Club Nautico, to enjoy Palma nightlife. 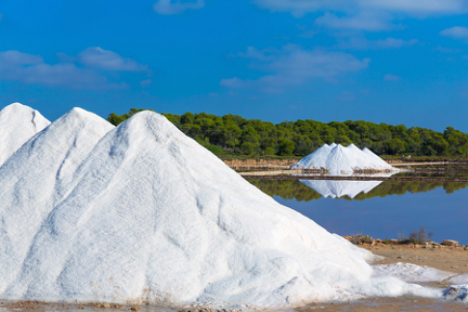 Cruise to Les Salinas, the famous salt flats on Mallorca with great long sandy beaches. Stop for lunch. This area has a rich history and was long prized for the production of salt. Today the town of Ses Salinas is a sleepy area, beautiful in the juxtaposition of cliff against the long salt flats, which attract a wide variety of wildlife and birds. This is another bird watcher’s haven. The salt flats still produce around 15,000 tons of salt annually. Stop in for your own bag of Les Salinas sea salt and enjoy the vast expanse of unspoiled beaches. Have lunch on anchor.

Mid to late afternoon cruise to Alcudia for the night. Built on Alcudia Bay, this area is known for the vast expanses of beaches. Alcudia has been inhabited since the Bronze Age and today is surrounded by the Gothic built fortress walls. Walk on the top of the fortress walls, almost around the entire village, for a great view of both the surrounding area and the village itself. The city center of Alcudia within the surrounding walls is an area of walking streets and piazzas with shops, restaurants, and bars. This is the nightlife location of Alcudia. Overnight dockside. 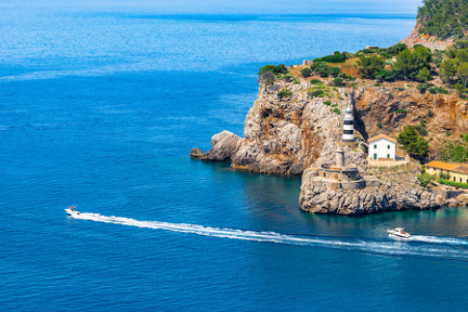 Cruise to Soller for the night, stopping on the way at Bahia de Pollensa during the day, anchoring for lunch to enjoy the beaches and lovely water. This is a great location for swimming, and water toys. In the late afternoon head to Puerto de Soller to dock. The village of Soller is located a few miles inland of Puerto de Soller, and is connected to the Port by a small vintage train. Be sure to take the train to Soller, sitting in a valley surrounded by orange groves.

Soller was built on oranges, as a main business, and at every street corner and café, fresh squeezed orange juice is available. Of note, in town is a good modern art museum, Can Prunera, housed in an Art Nouveau mansion with works from artists such as Picasso, Miró, Matisse, Basquiat, Rusiñol, Magritte, Leger and Chillida. This is a large hiking and cycling area with many well marked trails, as this is an area to enjoy the beauty of the great outdoors framed by orange groves. Return to the yacht for dinner, and perhaps a drink along the promenade at Port de Soller. The sleepy town of Soller may be better to visit during the day than for nightlife. 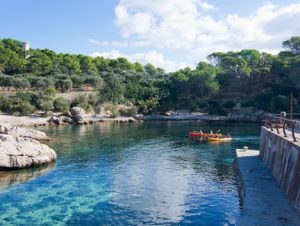 Cruise to Andratx Port, a lovely little fishing village, with docks filled with yachts, with expensive villas lining the hillsides behind. Stop on the way to anchor for lunch at the little island of Sa Dragonera, now a National Park, with hiking trails, and great swimming, before heading into Andratx Port. This is a lovely little typical fishing village, and while the locals do fish, the quaintness of this little fishing village is enjoyed by many. Explore the little village, stopping at a harbor side café for, what else, fresh fish. After dinner, the harbor front is alive and a great place to watch the world go by. 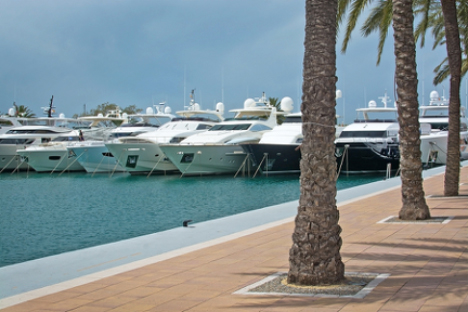 In the morning head to Puerto Portals, considered the glitter and glam port of southwestern Mallorca, where one never knows who one might see. This is a created marina centered village around 30 years old, filled with chic shops, bars and nightclubs. For daytime fun head to the beach at Cala Portals Nous, a small protected sandy cove. Stop for a drink at Roxy’s or Moods, and enjoy Designer Boutique Shopping. At night, the town comes alive with a very international chic jet set crowd. 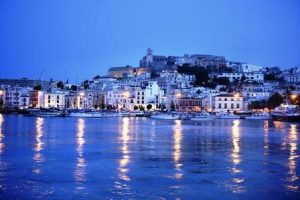 Cruise the 60 nautical miles to Ibiza Island to Ibiza Town Botafoch Marina home to the world famous Pacha Night Club. This marina is one of the centers of chic shopping. Just behind the harbor front is Ibiza Old Town, called Dalt Villa, which is a UNESCO World Heritage Site, and within live traditionally black clad Ibicencos, whose families have lived within these walls for decades if not centuries. This is an area to visit on foot, to explore the narrow winding walking streets, filled with little shops, cafes, restaurants and bars. Also within Dalt Villa are great art galleries and several excellent museums; one of which houses an outstanding display of Roman artifacts found entirely on Ibiza. Another museum houses items from the Phoenician Age to the 1300’s found in 2002 in a room in the castle that was filled with dirt. In the 1300’s the castle was an important fortification for the islanders, and often after retreating to the castle interior, the locals would bury the room leading to the castle gate in dirt to deter entrance by their enemies. In the 1300’s this was done again, however the invading Knights from the mainland were victorious, overran the castle, and presumably the room filled with dirt was forgotten. 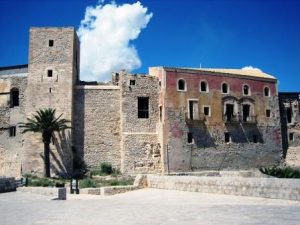 In front of Dalt Villa around the port is the Old Fisherman’s Quarters, also with winding little streets best to explore on foot. Small boutiques can be found here that are often open until after midnight in the summer, along with stalls of the “Hippie Market” that open in the afternoons until proprietor feels like closing. And for anyone looking for another beach, there is a great beach across from Botafoch Marina.
each 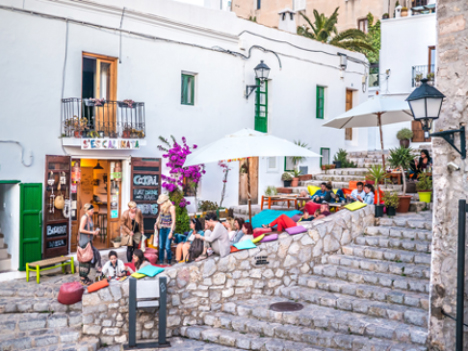 At night Ibiza Town comes alive, and the streets are filled with activity from the chicly dressed visitors to locals dressed in outlandish outfits, including walking on stilts to lure the chic crowd into various bars and nightclubs, especially along Calle de la Virgins, (Street of the Virgins). Music is played in the streets, up until 1:00am, and after music can be found within any number of bars and night clubs. Well known night clubs include Pacha, Heart Ibiza and Veto. 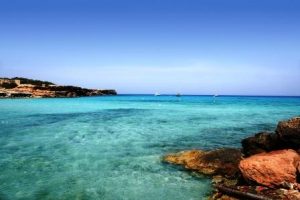 Cruise to the nearby islet Formentera to dock at Marina Formentera. The smallest of Spain’s Balearic Islands, Formentera is known for great beaches backed by sand dunes and pine trees with beautiful clear water. With 70% of the island protected against development, Formentera still sports the wildness and open areas of the Balearic Islands of yesteryear. In the 60’s Formentera became a haven of Bohemian lifestyle, which can still be seen in local style. Enjoy the beaches and water and visit the little villages and be sure to enjoy a cocktail at sundown at one of the beach bars with sand in your toes. 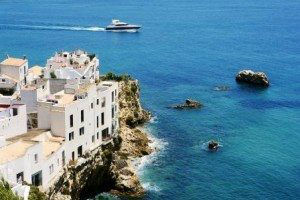