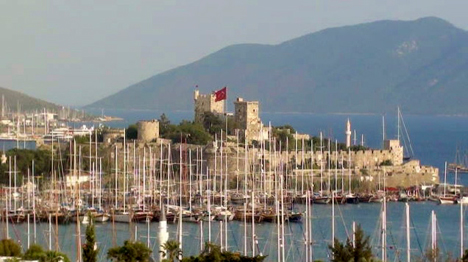 Board in Bodrum, Turkey, immediately depart for the Greek Dodecanese Island of Kos to clear into Greece in the main port. Situated only 5km off the Turkish peninsula of Bodrum, is Kos, one of the most fertile islands in the Dodecanese. It is abundant with ancient remains and beautiful beaches. The landscape of modern Kos Town, the island’s capital and main port, is picturesque. The Castle of the Knights prevails over the port, while Hellenistic and Roman ruins are littered everywhere. There are numerous archaeological sites to visit. The Asclepion is Kos’ most important ancient site and is located on a pine covered hill 4km southwest of Kos Town. Amongst the many sandy beaches, Agios Stefanos, sitting next to the ruins of two 5th century basilicas, is a must. At Masthari you can find a number of secluded spots on the sandy shores to rest and relax. After clearance cruise to the western end of the island to overnight in a lovely quiet anchorage with dinner on board. 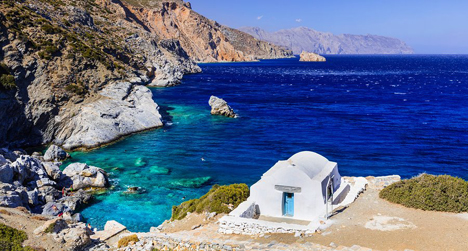 In the am, cruise to visit Astypalea Island. The island of Astypalea has the shape of a butterfly. While Astypalea belongs to the Dodecanese Island Chain, it is located between Amorgos and Kos, thus connects the Cyclades to the Dodecanese as a stepping stone. Astypalea has only 3,000 inhabitants and it is a tranquil island. The coasts of Astypalaia are rocky with many small pebble-strewn beaches. In Greek mythology, Astypalaia was a woman who was abducted by Poseidon when in the form of a winged fish-tailed leopard. The island was colonized by Megara, and the history of the island is mentioned in many ancient inscriptions. After exploring ashore and a refreshing swim, cruise to Amorgos to overnight.

Probably holding a larger place in Ancient History than Modern History, the sleepy little island of Amorgos, home to about 2000 people, was an important island in Ancient Times throughout history to the Ottoman period. There are many ruins on the island reflecting the numerous buildings, walls, fortifications and towers that were built over the centuries. Today, this island is very reflective of local Greek Island life, and moves along at a slow pace. 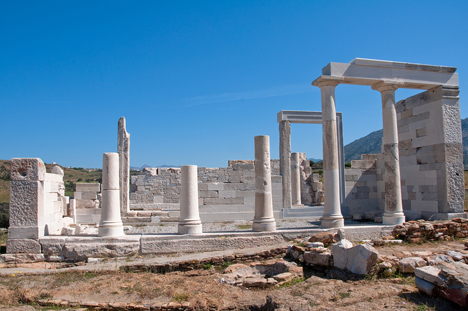 Naxos Ruins of Temple of Demeter

From here, cruise to Naxos. The only way to truly experience the majestic island of Naxos is on a yacht charter. Naxos is the most topographically diverse Cycladic Island in Greece; it boasts grand mountains and caves, cedar forests, plateaus, valleys, and sandy beaches. The geographic features and landforms complement the rustic architecture, exhibiting an appealing balance of nature and human development.

The novelty of Naxos lies in the fabric of Greek mythology as well as the rich history of the island. Zeus was believed to have grown up on the island of Naxos until an adolescent. Because of the height of Mount Zeus on the island, at 1003 meters, clouds are trapped by the peak thus creating a greater amount of rainfall on Naxos than other Cycladic Islands. Naxos is the most fertile island of the Cyclades with large fields of vegetables, along with fruit trees and extensive pastures for grazing cattle. Naxos has many beautiful beaches enjoyed by the inhabitants of the 64 villages.

Although Naxos is the largest Cycladic Island, it is not the most popular, so one never feels bunched or overcrowded. Explore the main town of Naxos, meandering through alleyways surrounded by the traditional Cycladic whitewashed buildings and visit the old Venetian fort. Inside the fort is the archeological museum of Naxos, where you will find early Cycladic and Roman artifacts. Naxos was the center of Ancient Cycladic culture and today there are several ancient sites that are easily accessible to visit. In addition to all on Naxos, there are plenty of quaint little shops, cafes and tavernas to enjoy. Overnight. 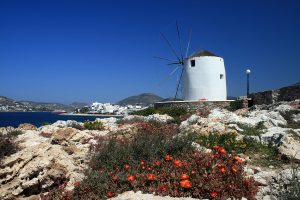 Enjoy the sail to Paros, the third largest of the Cycladic Islands after Naxos and Andros. Gently rolling hills surround the center and southeast of the island, which is occupied by endless vineyards. Paroikia (or Paros), the island’s capital and port, stands on the site of an ancient city. There is are picturesque ruins of a Venetian castle and the courtyards of the houses of the town – all of them painted white – are full of hanging pots of basil, jasmine and honeysuckle. Walk around the village before cruising to Langeri, a secluded sandy beach, or Drios beach, where is located a great fish taverna. 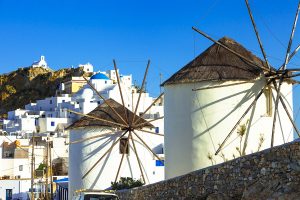 When ready, head to Serifos. As your vessel glides into the port of Livadi you’ll catch your first glimpse of the towering hills of Serifos flecked with the white, sugar-cube houses of Chora. The curious rock formations resemble human figures, which call to mind the myth of Danae, Perseus and Medusa, as if these prehistoric inhabitants of the island had been turned to stone. Perseus, the mythological hero that killed the Medusa, the terrible monster with a woman’s face and hair as serpents was born on this island. The fortress-like monastery Moni Taxiarchon near the village of Galani, which houses some fine wall paintings and important books and manuscripts, is of special interest.

The village of Panagia commands a panoramic view of the whole island. However, the greatest attraction of Serifos is its magnificent beaches. The beach of Psilli Ammos, which lies about 2 km to the east of Livadi, beckons with the softest and whitest sand. Close to the monastery of Moni Taxiarchon, there is a small village on the north coast named Platis Gialos with Platis Gialos bay, which consists of about three rather small beaches. Koutalas is a nice village with a beautiful bay and lovely beach, secluded from the winds. It is also the site of an old mine, with rusted remains of cranes, still in evidence. Overnight. 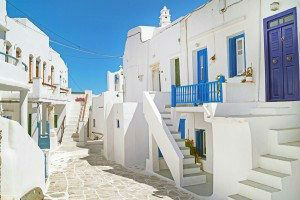 Depart in the morning for Sifnos. Sifnos is a mountainous island with fertile valleys, beautiful beaches and several towns. It has a long history and has been inhabited since 3000 BC. Apollonia is the capital of Sifnos and is actually a collection of villages of which Apollonia is one. The first inhabitants of Sifnos were the Kareans and the Phoenicians.

The island was famous in ancient times for the wealth, which came from its gold and silver mines and the quarries of Sifnos stone. It enjoyed great prosperity in Classical times, as can be seen from its Treasury, dedicated to Apollo at Delphi. Explore Kastro, (3 Km from Apollonia), Sifnos’ capital from the 14th to the 19th century, retains some of its medieval character. It is built on a rocky outcrop with an almost sheer drop to the sea on three sides. There are Venetian coats of arms and ancient wall fragments in some of the older dwellings. There is also a small Archaeological Museum, which exhibits a collection of Archaic and Hellenistic sculpture of ceramics to the Byzantine era. 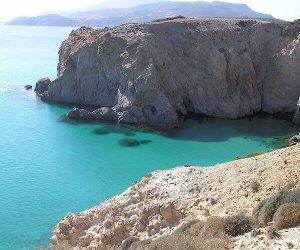 Then, head to the Cycladic Greek Island of Milos; fast becoming one of the most “trendy” islands to visit during the long warm Greek summer months. And perhaps modern days are a reflection of ancient times, as the very famous statue, Venus de Milo, now in the Louvre, was found on this island, suggesting that Milos was an ancient island of love. A volcanic island, Milos was well known in ancient antiquity before the Bronze Age, and as far back as the 6th century BC, as a supplier of obsidian, a glass like sharp stone used for weapons, household and farming implements and was an active and wealthy trading island.

The great natural main harbor on the island was once the volcano crater, and hot sulfur springs can still be found on this island. With a somewhat lunar landscape, many volcanic rocks and minerals can be found on this island, some of which are still mined today for export. When visiting the island of Milos, be sure to visit the Archaeological Museum. There is also a Folklore Museum, with exhibits showing the history of everyday life on the island. Above Klima, is an archaeological excavation site, filled with ruins. This is the location where the famous statue of Venus de Milo was discovered. Christianity flourished on this island and catacombs were built in the 2nd century AD where over 2000 people were buried, which are open for visiting today. However, as always, no visit to a Greek Island is complete without visiting the many beaches, over 70 on the island of Milos, and trying the local food especially fresh fish at one of the island tavernas. The island has many caves; which are great locations to explore and swim and snorkel. 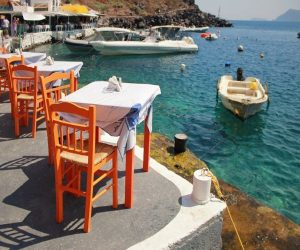 Sail to Folegandros, a small Greek island that only has about 765 inhabitants. It has three small villages, Chora, Karavostasis, and Ano Meria, which are connected by a paved road. Little is known about the ancient history of Folegandros. Its inhabitants were Dorians. Later the island came under Athenian rule. The island was conquered in 1207 by the Venetian Marco Sanudo and remained under the rule of Venice until 1566, when it was taken by the Ottoman Turks. The Greeks reclaimed it in the 19th century. Folegandros’ landscape is varied, and includes tall cliffs and a large cave. The “capital” of the island, Chora, is built on the edge of a 200-metre high cliff. The port of Folegandros is the small town of Karavostasis. The village of Ano Meria contains a small but interesting Ecological and Folklore Museum. Among the notable beaches on Folegandros is Katergo, accessible only by boat from Karavostasis.

From Folegandros, cruise to Sikinos. With only about 300 inhabitants, this island is very undeveloped and very reminiscent of Greek Islands from the last century. There are only 2 paved roads on the island, however through the centuries, most of the island was terraced for farming, although only a few of the terraces are planted today. With two towns, villages, “Allopronia” on the south sea side, being the port, and another higher up in the hills being the old chora. The chora up on the hills was the original settlement built up in the hills away from the shores to be well from pirates. The chora is composed of two settlements adjacent to each other, “Castro” to the west and “Chorio” to the east. There are a handful of ruins on the island, however may be hard to access, but the old chora should be visited if possible for a great feel for an original Greek island settlement. 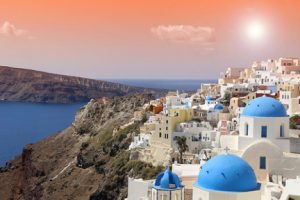 Cruise to Santorini. Spend the day exploring Santorini, where around 1624 BC, the volcano in the center of the island blew its top, literally. This once round shaped island became a crescent shape with a deep hole in the center, way below sea level, leaving behind a vast caldera now the signature of Santorini. Tumbling down the inside walls of the caldera are villages where the rooftop of one building becomes the terrace of another, with the rest of the interior of the structure tunneled into the hillside for cave rooms. Vistas are available everywhere you look, and exploring this island with the myriad of walking streets is a visual experience from shop fronts to bell towers, intermingled with glimpses of the caldera bay. Wander along the walking streets of the main town of Fira, filled with shops, or Oia, the town on the tip of the “crescent” filled with artist galleries.

Perched on the top of the island are the ruins of the ancient Greek and Roman town, and with the final huge volcanic eruption, a believed to be ancient wealthy Minoan trading city on the island was completely buried and lost in a sea of ash. No lives were lost, as previous smaller eruptions had warned the citizens who had abandoned the city and fled the island. Excavations are now taking place at this location now named Akritori, which may be open to the public, but if not visit the fine museum with excavated artifacts in Fira.

Santorini is also home to wineries, such as Boutari, and great black sand beaches. There is plenty to see and do for a full day of activity. 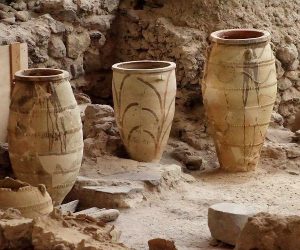