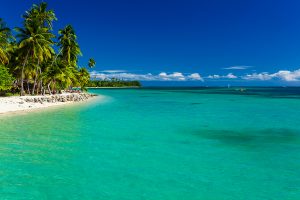 Start your charter boarding your yacht at Port Denarau on the island of Viti Levu and head to the Mamanuca Islands close by. Many compare cruising in the Yasawa and Mamanuca Islands to cruising in the Caribbean in the BVI’s, as these Fijian islands are close together for short cruises from anchorage to anchorage in relatively calm waters. Of course, on shore, these islands are all uniquely Fijian.

The first afternoon anchorage in the Mamanuca Islands is at Musket Cove on Manolo Island, home of the Musket Cove Yacht Club. This yacht club can be joined by any sailor; however you must have sailed in from another country, not just Port Denarau to join. Once you join; you are a member for life. Look around the anchorage at the international flags displayed waving off of various sterns, as this is a popular stopping spot for those on their round the world explorations. Two resorts line the shore, and the Musket Cove Resort shop features Musket Cove Yacht Club items and other Fijian items. This is a great calm anchorage for water sports. 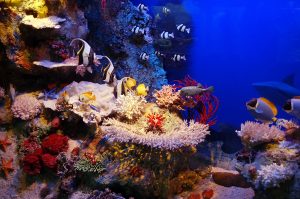 Cruise through the westerly islands of the Mamanucas to the Yasawas to the island of Naviti, anchoring in the protected harbor of the village of Soso. Visit Soso in the afternoon requesting to come ashore with the traditional Sevusevu Ceremony. Soso is the “capital” village of the Yasawas, and is a prosperous and very well kept village with a lovely church. This church is one of the oldest churches in Fiji, with traditional wood carvings lining the ceiling. An impromptu “Shell Market” organized by the village ladies, is sure to appear. Try in the afternoon snorkeling in the anchorage, or for those divers, a short tender ride to a nearby dive spot. 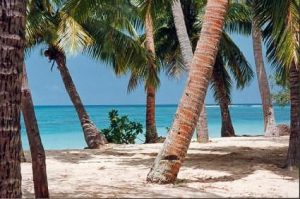 Manta Rays gather for feeding around the island of Naviti and can usually be seen during certain tide changes. Take the ships tender to the island cut to swim with the Manta Rays, some with a wind span of 8 – 10 feet. Snorkeling with these magnificent creatures as they glide through the waters is an exhilarating experience. Cruise to Tavewa and anchor in the Blue Lagoon, where the movie featuring a young Brooke Shields was filmed. Afternoon diving and snorkeling nearby at the island of Tavewa. 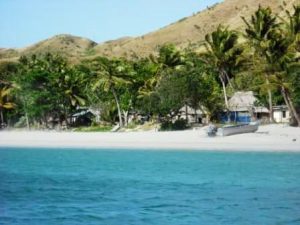 Cruise to Navula and anchor near the village of Tamusua. Visit the village for the traditional Sevusevu Ceremony and request permission to visit the caves on the nearby island, also considered in the realm of this village. Take the ship’s tender to the caves and climb through the rocks and into the interior. Access walkways and steps have been created and are manned by Tamusua villagers, who are also there to collect a small entrance fee. The caves and tunnels were believed to be the pathways of the Gods in ancient times and connected all of Fiji. Once inside, jump into a beautiful water basin inside the first cave. The intrepid can continue through an underwater opening into additional caverns and tunnels. Splash water up against the tunnel sides for the thunderous “voice of the Gods”. And as always a “Shell Market” is usually set up under the trees outside the caves where the ladies are happy to exchange wet money for their shells and other local goods. 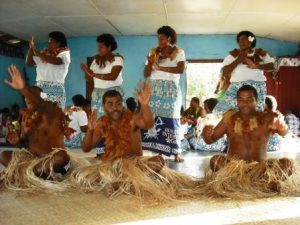 Cruise to Malakati Village, for a Meke dance ceremony performed by the villagers. Both men and women of the village perform in various traditional dances and sing accompanied by guitars, ukuleles and drums. This is also a well organized village with a village green in the interior between the school house and the church. A “Shell Market” may appear on this village green during your visit. If you have extra coins, a donation is much appreciated in the school box and the church box. 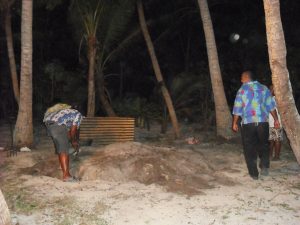 Prepare for a Lovo at Fanny’s, a shoreside traditional barbeque cooked on hot rocks in the Lovo pit dug into the sand under a covering of banana leaves snugged down by a layer of sand on an island, near the Blue Lagoon. To work up an appetite, spend the day swimming, snorkeling, diving and playing with the various water toys before donning your evening Sulus to head ashore. Arrive by ship’s tender for a walk along the beach to a Lovo feast heralded by music and songs around the Kava Bowl. After the Lovo is “cracked”, a local feast will appear for a traditional taste of the islands cuisine of Fiji. 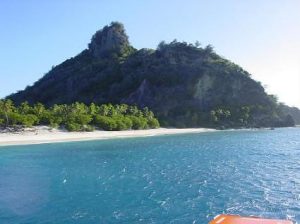 Head south and stop to explore the beaches of the uninhabited island of Monuriki where the movie “Castaway” was filmed featuring Tom Hanks. If you have seen the movie, you will certainly recognize certain movie landmarks on this small island. And just like Tom Hanks, you may be the only ones on this island. Cruise to the island of Namara to overnight.

Back to Port Denarau to disembark for the end of your Fijian Experience.