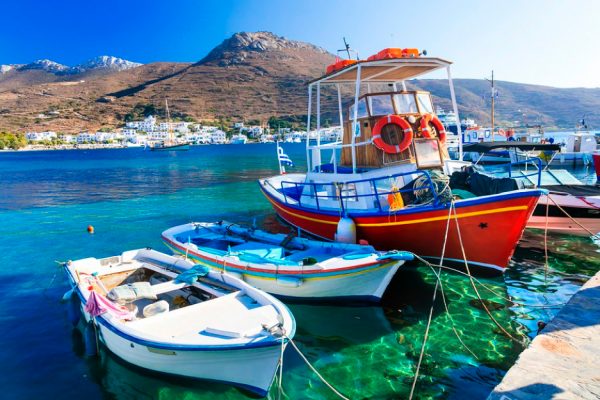 A less often visited Cycladic Island and the furthest east in the Cycladic chain of islands, Amorgos Island is most easily visited by private yacht charter. Probably the most iconic and easily identified part of this island is the fantastic Monastery of Chozoviotissa painted white, built into and clinging to the side of a cliff on the other side of the island from the main port. This is what identifies and sets this island apart from the rest of the Cycladic Islands, and lets any visitor know at once on approach by sea, that yes, one has reached Amorgos Island. 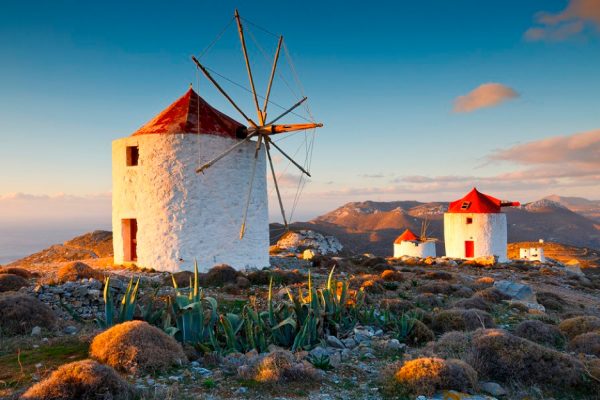 Inhabited since the Early Cycladic Era, which has been evidenced by archaeological finds on the island, Amorgos has a long cultural history and tradition. This is an island where one steps off the beaten track to visit an island that has preserved its traditional feel; where the locals welcome you with a smile on their face and perhaps a shot of the local raki based liquor steeped in aromatic herbs. Once on shore, walk across this island on the many trails and walking paths through a countryside redolent with wild herbs. One trail or another will end up at one of the many beaches around the coastline of this lovely island. 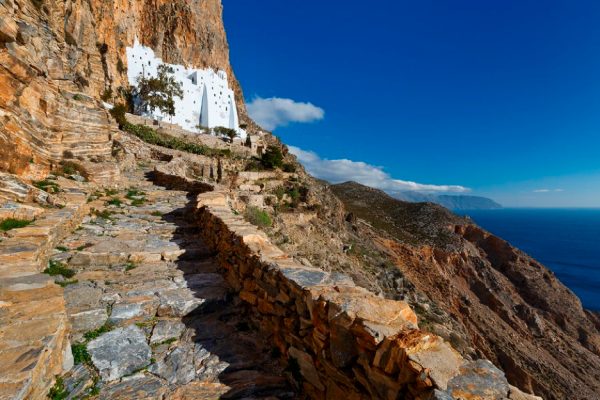 Also once ashore, be sure to visit the Monastery of Chozoviotissa which is not easy to reach and is not open many hours of each day. So plan your visit to this Monastery wisely, as once reaching this island, to not visit the monastery when ashore is like being ashore in Athens and not visiting the Acropolis.

The 10th century cliffside monastery of Panagia Hozoviotissa, dedicated to the Virgin Mary, is a spiritual haven and one of the most important ecclesiastic monuments in Greece. Set high up on the steepest rock of Mt. Profitis Elias, 300 meters above the Aegean Sea, the building was said to resemble a “chest of drawers”, according to the French explorer Pitton de Tournefort.

The monastery has eight floors connected by narrow stone staircases carved into the rock with an interior that is like a labyrinth. Be sure to make it to the top balcony of the monastery for a stunning view. The cells of the monks are also all carved into the rock. Two icons of the Virgin Mary and other religious relics from the period of Alexios Komninos are all housed at the monastery. The ground floor has a worthwhile ecclesiastical museum.

Today, there are 3 people that live within the monastery and give each visitor on arrival the customary loukoúmi and shot of rakí psiméni (Amorgian raki heated with honey and spices) On cannot visit without men wearing long pants, and women wearing long skirts, and shirts that cover the arms and shoulders. If on arrival one is not wearing these clothes, there are an assortment of these clothes in various conditions outside of the monastery that can be donned for the monastery visit. Arrival at the monastery is not for the faint of heart as there is a long steep climb on a stepped walkway, or one can drive in a car, but there are few parking spots. And do check in the village before going to the monastery as opening hours change and the monastery is only open for a few hours each day. The views from the Monastery terraces are spectacular and besides seeing the bay below one can also see the islands of Astpálea and Anáfi to the southeast.

After visiting the Monastery, walk down to Agia Anna cove in the bay below. This cove is lovely with its small white and blue chapel by the water surrounded by cliffs. The small beach below is excellent for snorkeling through a maze of boulders that have fallen from the cliffs. 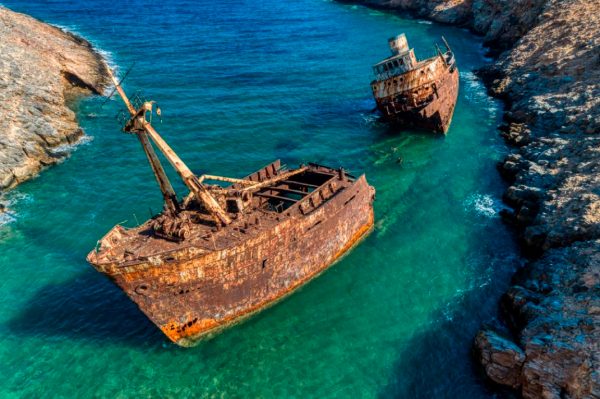 For those who can’t make it to Zakynthos there is a shipwreck beach on Amorgos too. In fact, Amorgos has beautiful beaches with azure waters and caves which are ideal spots for diving. 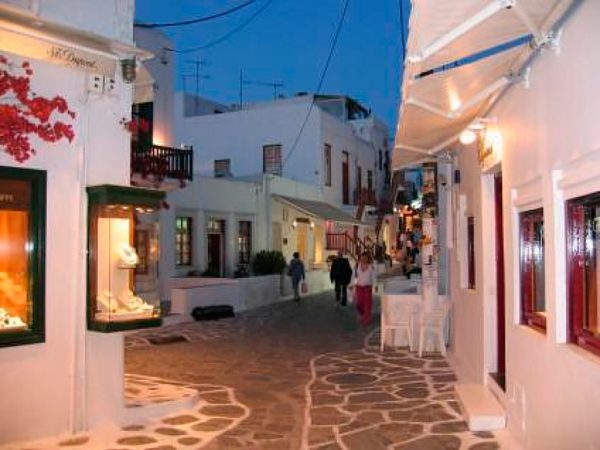 The main town of Amorgos, the Chora, is, to be safe from pirates, located in the center of the island, is a genuinely Cycladic village and one of Greece’s most striking and picturesque island capitals. It is full of charming alleys, water fountains, traditional Cycladic houses with bougainvillea trees in court yards and many churches. This is a little village full of walking streets, a 13th century castle, and monasteries.

When on a Cyclades Yacht Charter cruising through the Cycladic islands to the southeast or cruising from the Dodecanese Islands sailing west; visiting Amorgos Island on a crewed yacht charter is always a treat. 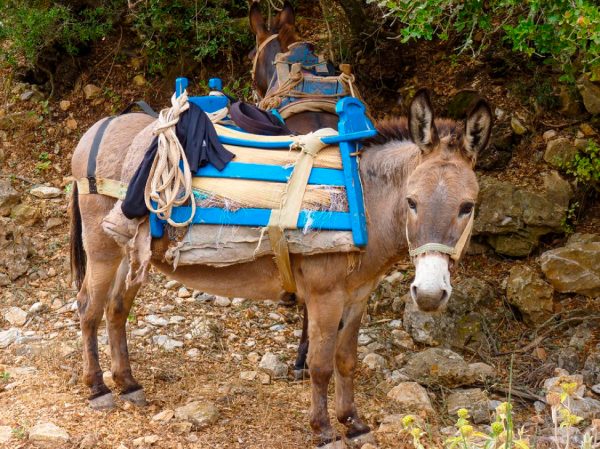 What to Do and See on Amorgos Island, Cycladic Islands, Greece

Monastery of Chozoviotissa: Be sure to check on the opening times each day. Men must wear long pants and a shirt that covers the shoulders and arms. Women must wear a long skirt and a shirt that covers the shoulders and arms. If lacking those clothes, they are available, no guarantee on the condition, outside the monastery to don on arrival at the gates. This is a “must” to visit if on the island.
Chora: The main town on Amorgos Island, which is located in the center of the island, and should be visited if just to see a truly traditional and very picturesque Cycladic village.
Katapola: Main harbor of Amorgos Island, with little colorfully painted fishing boats.
Aigiali: Second harbor on the island which is very popular with younger people as there is a camping site nearby. There are many cafes and tavernas on the quay around the harbor.
Tholoria, Lakada and Potamos: Little traditional villages perched up on the mountainside with beautiful sunset views.
Beaches: There are many beaches on this island, making it hard to choose which beach to enjoy. The island’s highlight beach is considered to be Agia Anna beach, below the 1000 year old Byzantine monastery of Chozoviotissa, where the famous film “Big Blue” was shot.