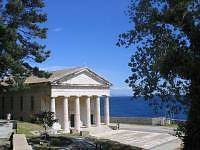 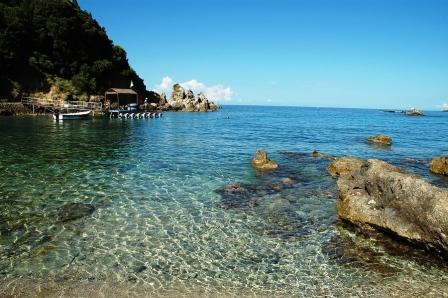 Corfu is said to be named after the beautiful mythological water nymph, Korkyra, with whom Poseidon fell in love, captured and brought to Corfu where their child, Phaiax, was born. Long after the fabled control of the island by Korkyra, Corfu, sitting off the northwest coast of the mainland of Greece was long controlled by the Venetians, and was the scene of numerous battles, and sieges, reflected today in the number of castles that dot the island country side and shoreline. 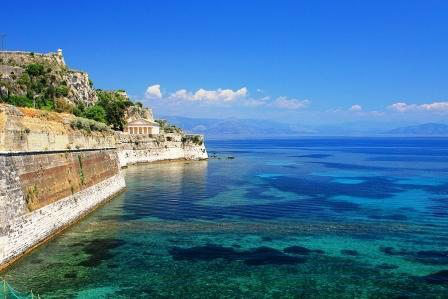 Old Town Corfu, built by the Venetians on a peninsula separated from the rest of the island by a natural gully that was dug into a moat, is a labyrinth of streets behind fortified walls. This is a colorful fun area to wander with narrow streets and little shops. Behind the town is the Esplanade and Citadel with an arcade filled with little restaurants and bistros. 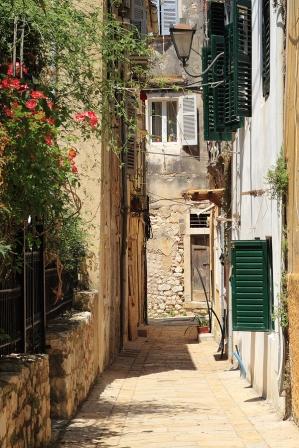 Nearby are the Neo Frourio (the new citadel) and Palaio Frourio (the old citadel), both also built by the Venetians and open for visitors to wander and explore. Also, nearby is the Palaia Anaktora and gardens, once home to the King of Greece and now filled with museums surrounded by the beautiful gardens. And to the south of the city is the Achilleion, built by the Empress of Austria in the late 1800’s as a neoclassic tribute to Achilles, and now open to visitors as a museum.

The countryside of Corfu is dotted with olive trees and wildflowers and around the coastline are beautiful beaches with crystal clear water. Be sure to visit Paleokastrits Bay on the northwest side of Corfu overlooked by the 12th century monastery of Theotokos. Take the ship’s tender to explore the many caves washed into the shoreline of this bay filled with beautiful blue water.

While there are certainly Greek and Roman remains on Corfu, the overwhelming architectural style and feel is Venetian and neo classic as left from the Venetian and British periods of occupation. And surrounding all are the beautiful Greek waters with bays and anchorages to visit while on your crewed yacht charter in Greece in the Ionian Islands. 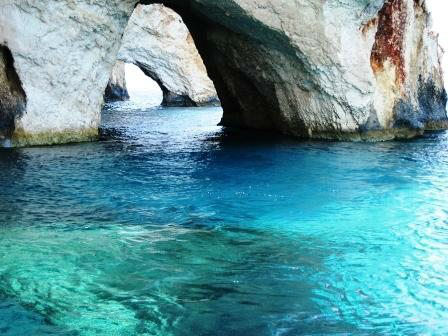 What to See and Do on Corfu Island, Greece

Explore the Grottos and Caves: By ship’s tender explore the many caves and grottos by sea that are all along the coastline with beautiful shades of blue green water within.

Corfu town: It is fun to explore the various walking streets of Old Corfu Town with its Venetian architecture, pop into shops, or perhaps stop for a cool drink, relax and people watch. Today a UNESCO World Heritage Site, be sure to visit Spianada Square.

The Governor Olive Oil Company and Tours: Five generations of the same family have worked this olive tree farm and produce a very good olive oil. Learn all about the production of olive oil from a walk through the groves to learn about growing and harvesting olives, along with a visit to a 15th century olive oil mill. Ending with a tasting of various grades of olive oils and flavored olive oils produced at the farm

Achilleion Palace: Once the home of Princess Elizabeth of Austria have a guided tour of this Neoclassical Palace, today a well-preserved imperial residence inspired by Greek mythology.

The Listion: Built by Napoleon in the Neoclassic style as barracks for his army during the French Occupation of Corfu. In its heyday only the aristocracy were able to be in this area of town. Today, the Listion is open to everyone to enjoy, perhaps at a café for a drink or to wander the shops.

Mon Repos: A small palatial estate, once the summer residence of a British official, which was then gifted to the Greek Royal Family. Birth place of Prince Phillip of England, husband of the Queen of England. Today the palace is the state archaeological museum.

Angelokastro or Angels Castle: Byzantine Fortress perched high on top of a hill where attacks by the Ottoman Empire were successfully and repeatedly rebuffed.
Old Fortress: Corfu’s Old Fortress is situated on the Acropolis on a peninsula near Corfu Old Town. The Old Fortress was built by the Venetians from the early 15th century to the 18th century, although all that remains are castle walls built by the British. There are extensive tunnels beneath the stout walls of the castle.

The Palace of St Michael and St George: Also known as the City Palace, this palace was the seat of the high commissioner in the 19th century and was later one home for the Greek Royal Family. The palace anchors one end of Spianada Square and was the first Neoclassical building built in Greece. There are extensive gardens looking out over the Old Fortress, and natural sea baths near the sea. Today the palace houses the Museum of Asian Art.