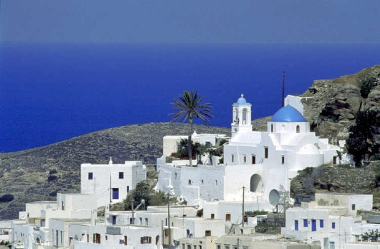 Ios is well known as a destination for youthful tourists, but the island is steeped in history and offers beautiful, unspoiled beaches. While without a strong military base, Ios was one of the first locations to raise a flag of revolution during the Greek War of Independence in 1821, which resulted in the Greece that we know today. It’s also the reputed resting place of the poet Homer, creator of the Iliad and Odyssey. A hilly island, there are numerous cliffs around the edges of the island, met at the bottom by the Aegean Sea. The island offers many peaceful secluded bays, and traditional Greek seafood tavernas. 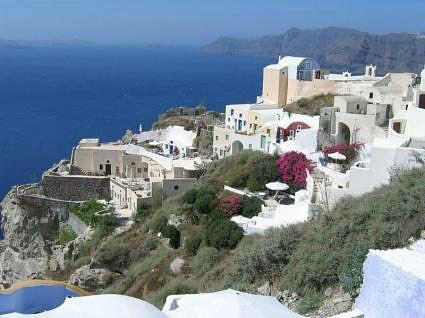 What to See and Do on Ios Island, Greece

Port of Ormos: The port of Ormos is a delightful town of traditional houses, arcaded lanes and windmills. This is the main port of Ios, where most sail into and the ferries dock. Enjoy a very busy nightlife in this port town. Ormos is the gateway to the main Chora, which is up in the hills, situated so, centuries before, to be hidden from pirates.

Archeological Site of Skarkos: This site is an early Bronze Age settlement that is quite large and well preserved and may be one of the best archeological sites for this time in Greece; especially of the Keros-Syros culture during the Early Cycladic II Period.

Chora: Reached by a pathway from Ormos Port, the capital city is a pretty town with narrow, arcaded alleys, stone streets and whitewashed Cycladic homes. Visitors can see the ruins of the ancient walls that once surrounded the town from stone steps that lead from the port to the village. The vantage point from the top also offers a spectacular view of the bay. The town has an archaeological museum and 12 windmills in the square. The Church of Agia Aekaterini contains the ruins of an ancient temple dedicated to Apollo. The Church of Panagia Gremiotissa was built during the Turkish occupation on a spot that was allegedly dictated by a miraculous icon of the Virgin. The icon was discovered on the shores of Ios after it was hurled into the sea to save it from the invaders. The Modern Art Gallery houses work from the surrealist Austrian painter Helmut Kand who lives on the island.

Manganari Beach: Considered by many to be one of the most beautiful beaches in Greece, with beautiful clear water, and long sandy beaches filled with golden colored sand.

The Paleokastro Venetian Fortress: This fortress was built in 1400 and is on the northeast corner of the island. Remains of a little Venetian town, which the fortress walls once protected, can be seen inside.

Monastery of Agias Theodotis: Inside this monastery is a door which medieval pirates penetrated, meeting their end by being scalded to death by boiling oil. A September 8th celebration is held each year to mark the event.

Homer’s Burial Place: No visit to Ios is complete without a visit to the reputed site of Homer’s burial place in the north of the island. It is believed Homer’s mother was born on Ios and that Homer spent his last years there. While the ancient town that was home to Homer’s mother has long collapsed into the sea, the entrance to a tomb remains. 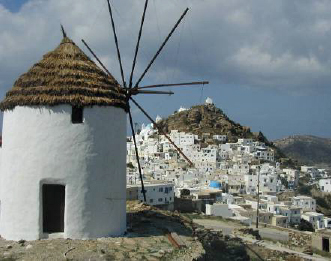 The windmills of Ios

Include Ios Island when cruising the Cycladic Islands, as a stop between Naxos, and Santorini.