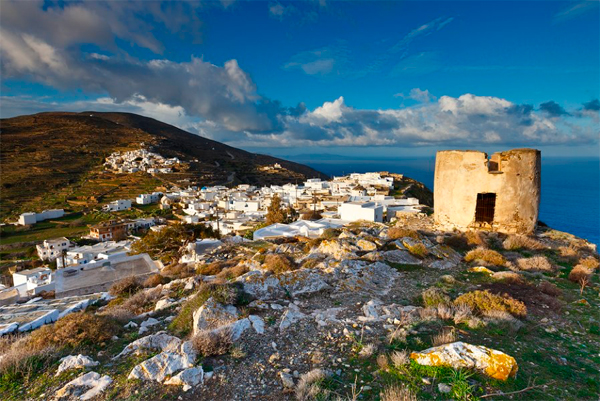 Located between Ios and Folegandros, Sikinos is one of the most secluded islands of the Cyclades island group and one of the most untouched islands of the Cyclades. Only 300 permanent residents live on Sikinos, so when visiting this traditional little Cycladic Island by yacht charter, do not expect luxurious tourist amenities or wild nightlife. Instead, this is an island of traditional Cycladic life, and an island that loves their Festivals. This is the perfect island to visit on a private yacht charter especially at the time of a Festival, as the islanders love to include any visitors in the feasting and dancing that goes on until the wee hours of the morning. 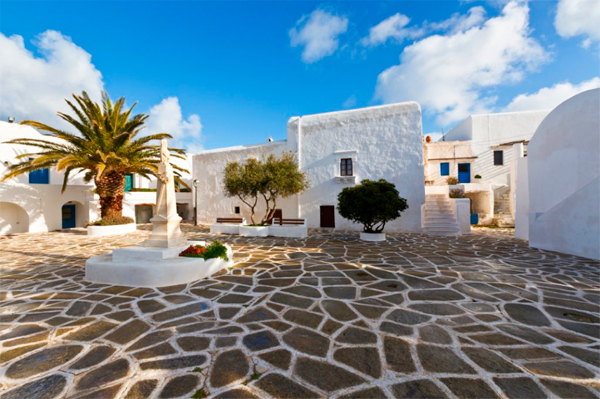 Chora, is the capital of Sikinos with the characteristic minimal architecture for which the Cycladic Islands are known; the same architecture that immediately identifies a Cycladic island. Perched on the slopes of a hill, away from the coast in case of pirate raids, Chora is dotted with whitewashed houses and blue domed chapels. Chora is made up of three settlements, Kastro, Vouni and Chorio, all of which is surrounded by cliffs to the west and southwest and by walls to the east and southeast providing a fabulous view of the Aegean Sea. In Chora wander the many little winding alleyways and walking streets. There is a Folklore Museum housed in an old olive pressing building featuring exhibits, and artifacts from the island’s past and is worth visiting if open, as the museum is typically only open July and August. 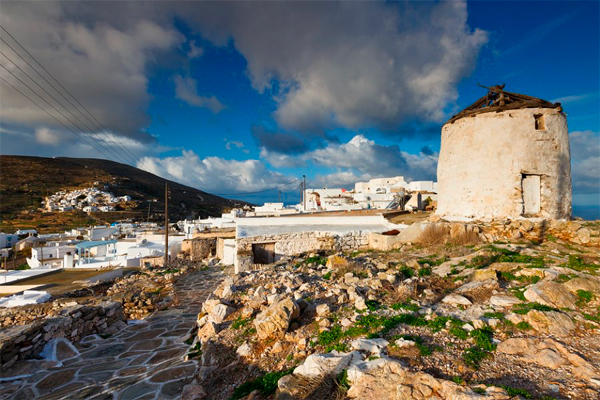 While Chora is tucked up in the mountains and fun to visit, the port of Sikinos, Alopronoia, is the main center of activities and is where the most hotels, shops and tavernas are located, and where your yacht will come into the island. This is one of the most picturesque fishing ports in the Cycladic Islands, where fishermen clean and repair their nets, and the main business of the island, fishing, occurs. The villagers use a special kind of bait called “kaftero” and fish for squid at night. At night, in the summer, there may be live music in a taverna on the quay, however this is the extent of nightlife on the island. There are very few cars on the island, so most villagers and visitors alike walk from the port to Chora, and to beaches, as the island is so small.

Worth a visit is the old Monastery of Episkopi about an hour walk from Chora. Episkopi, was originally a Roman mausoleum built in the 3rd century A.D. which was modified to a Christian church with a dome and a tower bell in the 17th century A.D. After a more recent earthquake, the church was greatly damaged but the big part of it has survived which is surrounded by many chapels, cells, and ancient remains. In 2017, the grave of a wealthy woman from ancient times, buried within the original Roman mausoleum, was found including gold jewelry, and glass vases. 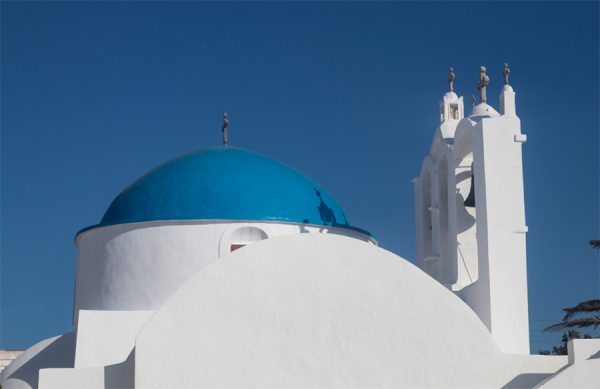 Sikinos is an island that takes their Festivals very seriously. The Religious Festivals include the Festival for the Dormition of the Virgin Mary on August 15th, the Exaltation of the Holy Cross on September 14th and the Holy Transfiguration on August 6th. Villagers start preparing in advance white washing houses and decorating with flowers, while also cooking and baking various traditional dishes. While each Religious Festival has its own customs and traditions, all Religious Festivals start with a church service and after with feasting on the traditional dishes accompanied with wine. After there is dancing to the sounds of the violin, lute and bagpipes lasting until late at night.

The Sikinos Summer Festival, a non-religious festival, is the most popular festival in Sikinos. This is a grand festival taking place in August and lasts for about two weeks. All islanders and visitors join in and there are lots of events, including music concerts, exhibitions, and dancing. 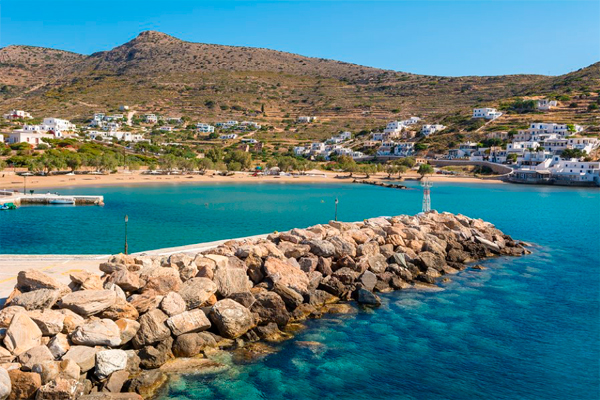 Surrounded by very popular Cycladic Islands such as Santorini, Paros, Ios and Folegandros, Sikinos sits quietly by itself, a very traditional Cycladic Island focused on their festivals, and day to day village life. Sikinos is a Cycladic island unexplored by many but well worth discovering, and most easily visited by private yacht charter. 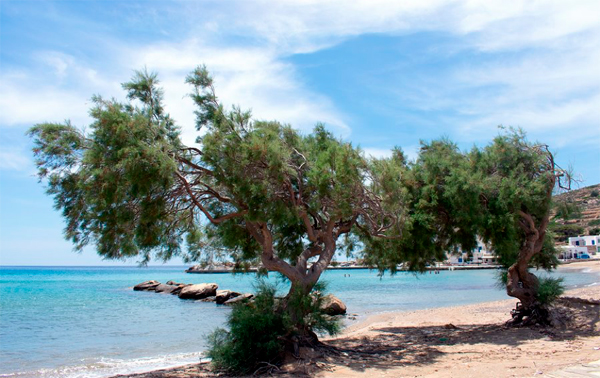 What to See and Do on Sikinos Island, Cycladic Islands, Greece

Monastery of Episkopi: Located about a one hour walk outside of Chora, this is the most historic site on the island. Excavations are happening, so perhaps you will see archeologists at work. Once a Roman Mausoleum, (a grave has been found from that time period) the building was modified into a Christian church in more recent history, however has been damaged in an earthquake.
Folklore Museum: Located in an old olive press in Chora, this museum may or may not be open, and the museum is usually only open July and August. Enjoy exhibits and artifacts from the island’s past.
Moni Zoodohou Pigis: A fortified monastery that stands on a hill above Chora. Deserted since 1834, it resembles a castle with an enclosing wall. The Moni served as a shelter for the villagers in Chora during the period of pirate raids.
Manalis Winery: Opened in 2008, this winery offers tours for visitors, and is open in the summer season. In the winery’s cellars are a photographic presentation of the wine production process. The winery produces three different dry wines, and one desert sweet wine made from sun dried grapes.
Beaches: There are four main beaches on the island, however unlike most Cycladic Islands, the beaches are either accessed by yacht tender from the water, or by land by walking paths.
Panagia Pantanassa Church: Located in Chora, this church was built in 1787 and has a lovely katholikon and beautiful late-Byzantine icons.
Black Cave: Located on the northern end of the island just below the monastery of Zoodohos Pigi, this is one of the largest caves in the Cycladic Islands. Accessible only by sea, and not from land, sea access today is controlled so that one can only enter the cave on a public excursion boat which may or may not appeal.

Honey from this island is famous for its intense aroma and vibrant color.