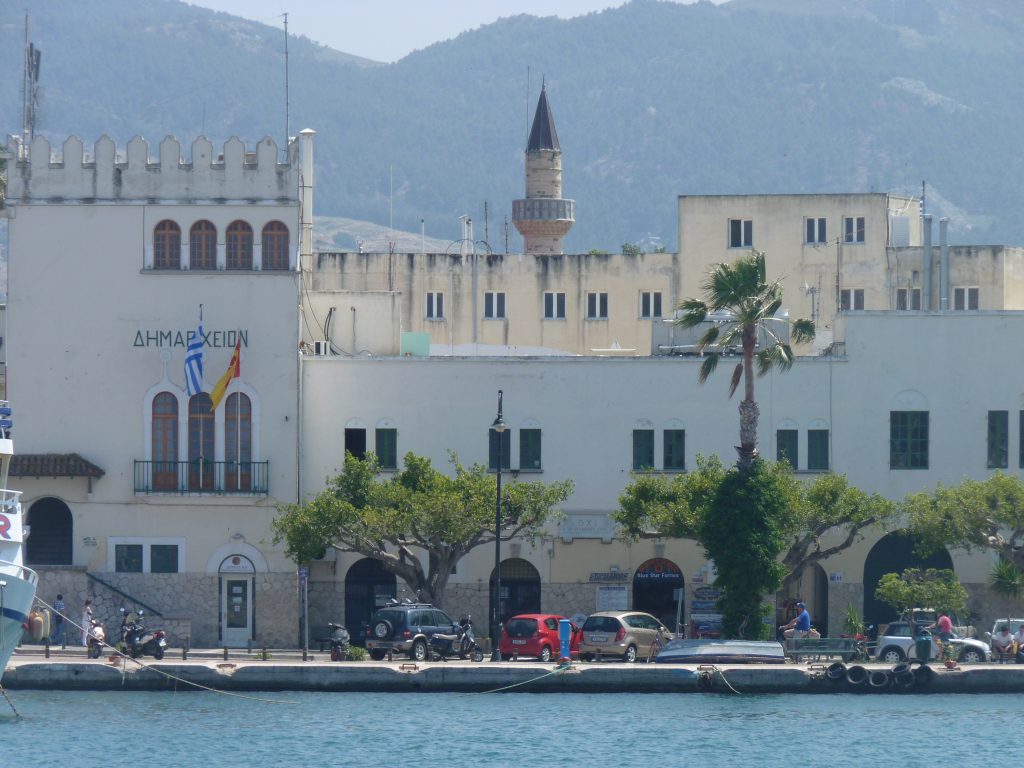 Yacht Charter in Kos is on an island originally settled by the Carian Empire. The Greek Dodecanese Island of Kos sits just 2.5 miles off of the coast of Turkey and was most well known in Ancient Times for producing wines, growing lovely melons, and weaving silk. An important time period for Kos was the Hellenistic Period when the islanders were at the zenith of prosperity, followed then by wealth brought by the Crusaders in the Middle Ages. Both time periods have left their mark on the island, which is easy to visit and explore on a yacht charter in Kos while cruising through the Greek Dodecanese Islands and along the coast of Turkey. 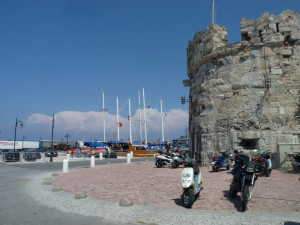 Kos Island Fortress next to harbor

Hippocrates is said to be from Kos, born when the island was a center of learning and culture during the Hellenistic Period. Today, one of the most significant archaeological sites of Hellenistic ruins is the Asclepion, once a center of great healing. The island of Kos, a volcanic island, had in Ancient Times and still today, many mineral springs believed to have healing properties. The site of the Asclepion was discovered at the beginning of the 20th century and is still being excavated today. 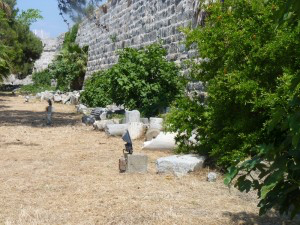 Ancient Kos was considered an island of great beauty, and as the island sat right on the Ancient Trading Route, was an island of great prosperity. Many monuments were built on the island during this period, and towns were constructed with complex sewage and drainage systems. Many ruins from this period remain to be seen today. Amongst the ruins are the theatre, the prytaneum, the gymnasium, the stadium and the agora as well as the ruins of various temples, villas and sections of the ancient protecting walls. 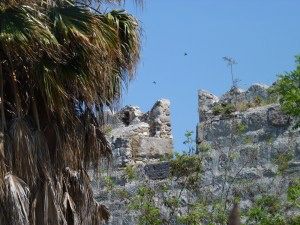 From the Middle Ages, and the Crusading Knights of the Order of St. John, remains a good-sized fortification and castle sitting right on the main harbor, across from Bodrum, Turkey. The fortifications were begun in the 14th century and are really two fortifications, one within the other, separated by a moat. Today, behind the Castle of St. John sits a small protected yacht basin, offering great protection for visiting yachts. Also close by on the coast is a good marina. This area of the island is where the ferry service operates between Kos and Bodrum, Turkey. Today the Castle of St. John is a museum well worth visiting. 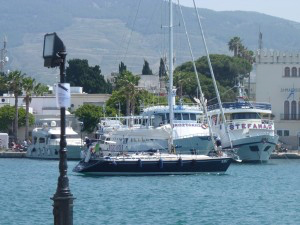 From the Venetian Period of Kos is the Antimachia Fortress, within which are several churches and houses built in the Venetian style. The villagers of Antimachia are well known for the excellent honey produced in this area. And up in the hillsides, is the village of Zia, a great location for a view of the entire island, especially to see the sunset comfortably from one of the many tavernas and browse for crafts in the shops along the streets. 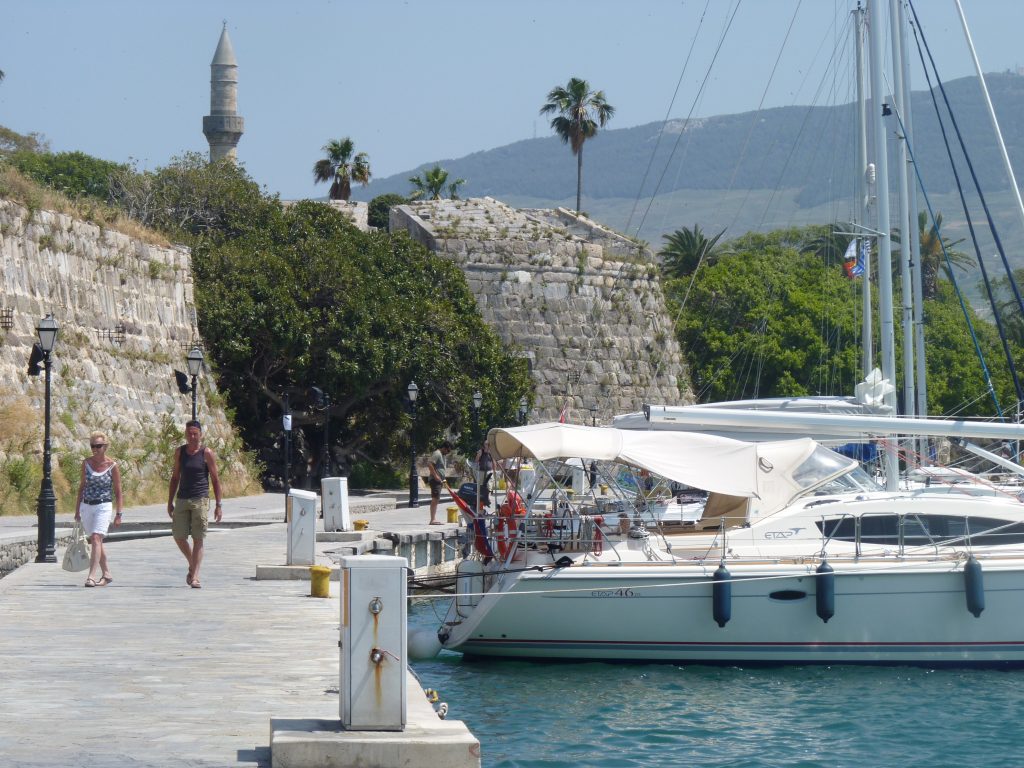 What to See and Do on Kos Island, Greece

Greek Hellenic Ruins: As Kos was the location where Hippocrates practiced, one of the most significant archaeological sites of Hellenistic ruins is the Asclepion an extensive archeological site being excavated today. Located around the island are other ruins from the Hellenic Period as Kos was a very wealthy trading island. Ruins of complex living areas including sewage disposal systems have been found along with a theatre, the prytaneum, the gymnasium, the stadium and the agora as well as the ruins of various temples, villas and sections of the ancient protecting walls.

Castle of the Knights of St. John: Positioned directly across from Turkey, once the Ottoman Empire, the Castle was built in the 15th century. Being hastily built, the Knights used stones and other building pieces found in Hellenic building ruins to build the walls of the castle which can still be seen today. Also, inside are Del Caretto’s Bastion, cannon-posts, and stone-carved coats of arms

Antimachia Fortress: Built during the Venetian period by the Knights of St. John, the fortress is located on a small hill above Antimachia village, to the south of Kos Town. Started in the 14th century, the inscription above the main gate gives 1492 as the date of completion. The external fortification walls still stand, and inside there are two Venetian churches still standing along with the foundations only of houses and a cistern.

Paleo Pili: An old Byzantine fortress with an abandoned ghost town surrounding. Need good shoes to climb to the top where there is an excellent view. A taverna is available within the area for refreshing drinks. 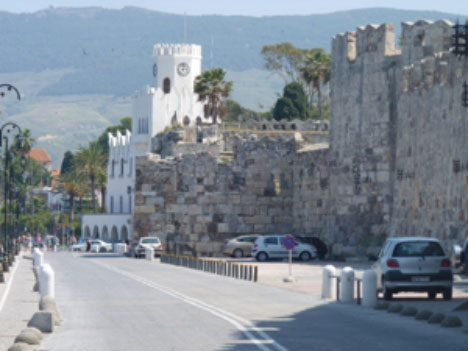 Front Gate of the Castle of the Knights of St. John

There are numerous great beaches on the island, melons are still grown and sold along the roadside, and great wines are still produced on the island of Kos. There are ruins and fortresses to visit and lovely little villages with their own character to explore, making Kos a great stop on a crewed yacht charter itinerary when cruising through the Greek Dodecanese Islands.