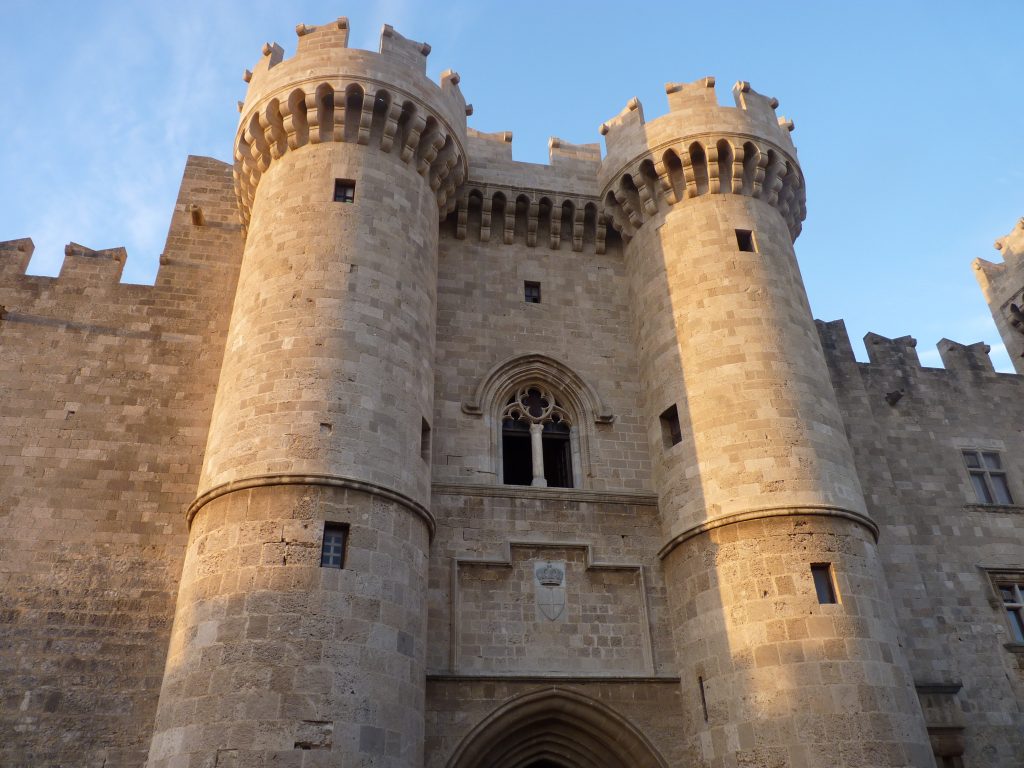 Rhodes is one of the best-known Greek islands and vacationers have been going there for decades. Yacht Charter in Rhodes is a busy activity on this virtually international island. Everywhere in Lindos and Rhodes Town you will see bars, clubs, and restaurants with food from all over the world, and miles of long sandy beaches. The beaches on the northern side open to the Aegean Sea and are best for wind driven water sports such as windsurfing. While the beaches on the southern side open to the Mediterranean Sea with less current and wind and are better for swimming and sunning.

Rhodes used to be the sun god Helios’ island. According to mythology, he had fallen in love with the nymph Rhodes, and when he shone his light on her, she transformed into the island. The name means “rose” and the island has been known since antiquity as an island covered with flowers, as it is today.

It was probably during the Classic period that the Colossus of Rhodes was built with one foot on each side of the harbor of Lindos. After an earthquake it fell apart, but when the people on Rhodes wanted to rebuild it, an oracle told them not to. 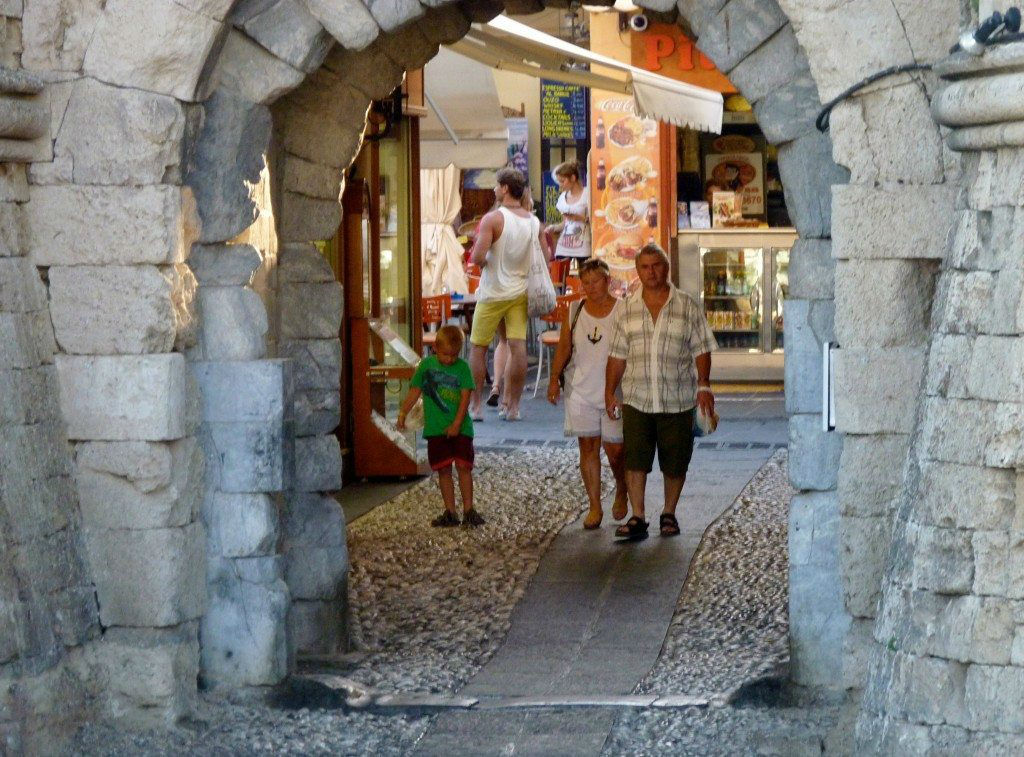 “Old Town” Entrance Through the Gates

The capital, Rodos, is in itself very beautiful. Just walk around in the Old Town and see where the streets take you. Mandraki is a nice area, and the hill of Monte Smith provides a wonderful panorama view. It is in the harbor of Mandraki the two famous bronze deer stand where the Colossus of Rhodes once was. Mandraki Harbor or the harbor right beside Mandraki is the location where your yacht will most likely dock to see “Old Town”.

“Old Town”, as it is referred to, is a medieval walled city, once home to the Knights of St. John (the Hospitaliers) and subsequent Knight Orders to keep this island as a stronghold for Christianity, for across the way was the power of the Ottoman Empire. 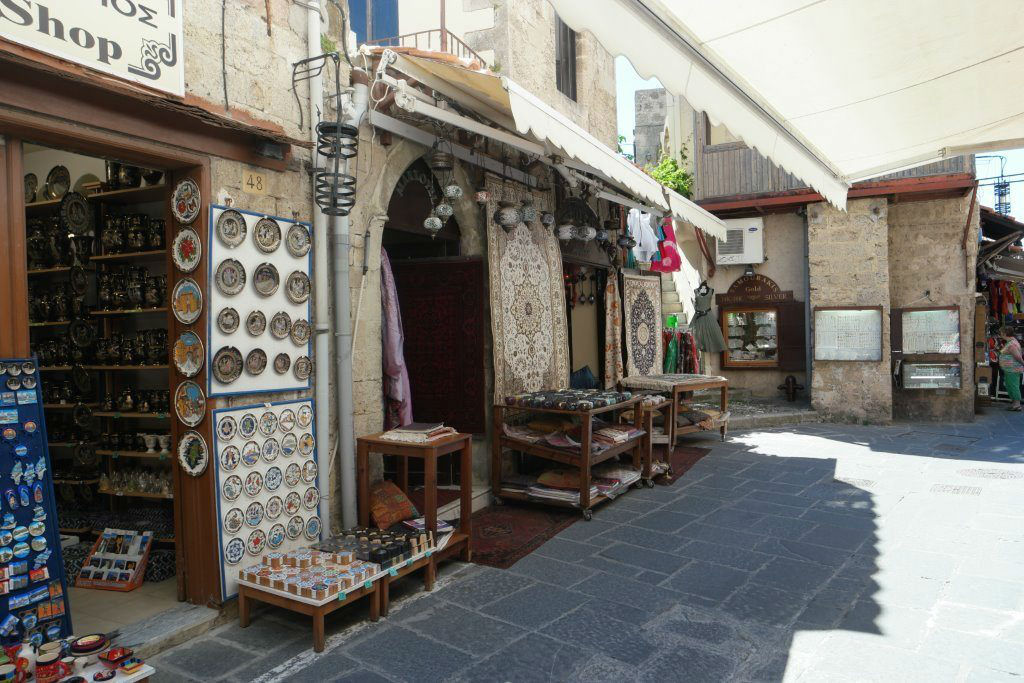 The walled city still exists including partial remains of a dry moat, and gated entrances. The crenellated tops of the city walls mark the outline of this old city. Within the walls today is an active city with walking streets, courtyards, and medieval buildings. Much of the Old Town is now shops, some touristy and some with elegant Greek jewelry, silver, leather, and couture. Still within the Old Town, and open for tours, is the Castle of the Grand Master, and running in front of the castle, is the road of the Knights, once inns for the various knight orders; some now continue to operate as offices for knight orders still in existence. Tours are offered of the Old Town, however also put aside a morning or afternoon to wander this area, and feel the medieval history come alive. 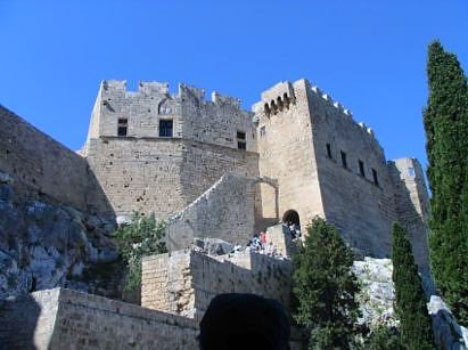 On the southern side of Rhodes, is the Greek village of Lindos, which can easily be visited by yacht, as there is a good harbor here for overnight anchoring. The harbor of Lindos has a nice beach ringed by a variety of Greek Tavernas offering seafood and typical Greek food for lunch or dinner. Lindos village is capped by an ancient acropolis where the remains of a many buildings from various civilizations and centuries are still to be found. The acropolis originally housed a temple to Athena. Ruins of this temple and the original Hellenistic walls of the Acropolis are still visible. During the Byzantine period a castle was constructed on the Acropolis. However, in the 1300’s, the Knights of St. John built castle walls on top of the Hellenistic walls, along with fortification towers and remodeled the castle so that virtually nothing of the Byzantine era is left and much of the remains on the acropolis now are from the time period of the Knights of St. John, including the church of St. John, which is still standing today. The Acropolis here is felt to only be surpassed by the Acropolis in Athens and can be explored by a short walk up from Lindos village. 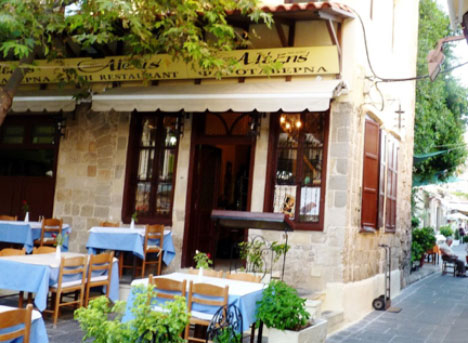 What to See and Do on Rhodes Island, Greece

“Old Town”: Explore this walled medieval village either on your own or with a private museum quality guide. Even after a guided tour it is fun to explore and visit the many shops. Tour the Castle of the Grand Master with or without a guide. At night the town erupts into a beehive of activity with nightclubs and bars, and cafes open late with a busy street life.

Lindos: Walk from town up to the Acropolis to explore the remains of many buildings from various civilizations. The Acropolis also offers a great photo opportunity of Lindos village and harbor below,

Mama Sophia’s Taverna: Located in “Old Town” and owned by the same family for decades. This is truly old style and very good simple Taverna Food.