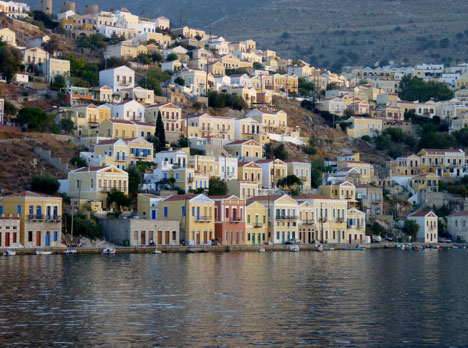 Symi, the reputed mythological birthplace of the Three Graces, takes its name from Poseidon’s wife, the nymph Syme, which is appropriate as many consider Symi’s harbor the most beautiful in Greece. Located just north of Rhodes and close to Turkey’s southwest coast, this southern Dodecanese island elegantly dons its prosperous history in a steep-sided fjord layered with white and pastel yellow houses with neo-classical pediments. Along with many historical sites, Symi offers numerous isolated beaches, many of which are only reachable by small boats and dinghies.

The island is divided into distinctive areas. Yialos, the main area around the harbor, is crowned by the older area up in the mountain side, known as the town of Chorio. This town of Chorio is the oldest inhabited area with many narrow lanes and picturesque houses predating the Neo-Classical which predominates on the Kali Strata and in Yialos. On the crest above Yialos there is a row of windmills.

There is a small settlement at Marathounda and a major Monastery complex at Panormitis. The interior, a forested plateau with many spectacular views, can be visited by car or bike on the road from Symi town to Panormitis. This is a great island on which to hike, as wild herbs grown on the hillsides, and in the summer the air is redolent with herbal scents. 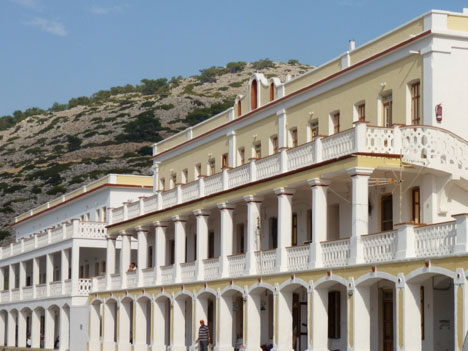 Monastery of the Archangel Michael Panormitis

What to See and Do on Symi Island, Greece 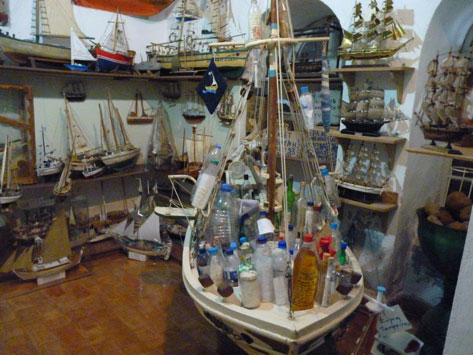 The Monastery of the Archangel Michael Panormitis: A Greek Orthodox monastery built on the southwest coast in the early 18th century is in a lovely bay that is an excellent stop to anchor for lunch, water sports and to see the Monastery. The Monastery is still inhabited by monks. Within the Monastery is a small but interesting museum of traditional Greek artifacts of island living in the 1800’s. There is also a museum of messages received in bottles that have floated through the waters on the outside of the bay as legend is that all the waters in the world pass by the mouth of the bay where the Monastery is located, so any bottle thrown into the water in any worldwide location meant for the Monastery will reach its destination at some point.

The “Knight’s Castle”: The remains of this castle overlook the main town of Symi. Built by the Knights of St. John as an expansion of a Byzantine castle on the same site, of which many parts are still visible. There are also remnants of an ancient citadel on which the Byzantine and then Medieval castles were built.
Symi Archeological Museum: Located in a typical Symian House, exhibiting artifacts dating from the Hellenic, Roman and Byzantine periods, along with more recent vernacular pieces of every day life several centuries ago on the island.

Churches: Wandering through the streets of the main town and up into the hillsides one will constantly stumble upon or see the domes roofs of the thirteen major churches and dozens of chapels, some dating back to the Byzantine Era.

Hiking: From one end of the island to the other is always possible and will take around 6 hours following old Pilgrim Routes, or just plain old donkey trails.

Emborios: A port on the northern side of the island (also called Nimborio) has surviving ancient Pelasgian walls and a set of twelve domes remaining from workshops used by artists. 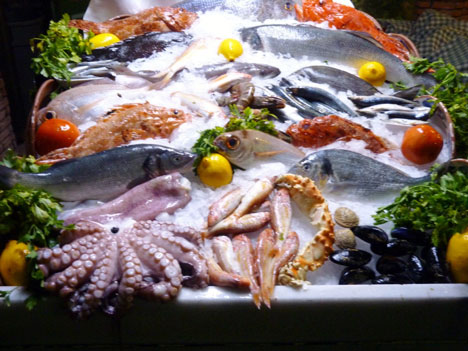 Symi is an island with a historic past, but always a laid back relaxed Greek Island with herbal scents in the wind. Once an island filled with sponge divers, today the island is filled with fishermen and there are very good fish tavernas ringing the quay in the main harbor.