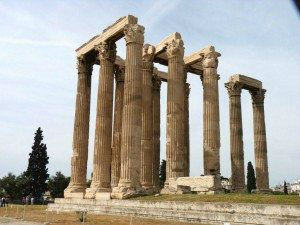 Join your yacht in Athens, unpack and relax as you begin your cruise to Kea. The exceptionally picturesque island of Kea lies 15 miles from the southeast coast of Attica. The mountain masses, which are encountered in most of the Cyclades, are broken up by small valleys sparsely planted with vines and fruit trees, that run right down to the sea, and open out into pretty little bays. Visit one of the island’s peaceful beaches at Pisses, Korissia, and Koundouros. Cruise to the western side of the island into Agios Nikolaos Bay and deep within it to the port of Korissia, which is considered to be one of the safest natural harbors in the Mediterranean. 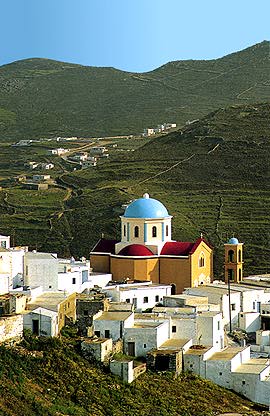 Kithnos inherited its name from Kithno, king of its first settlers, the Dryopians. The small island of Kithnos is mainly mountainous with many pretty little bays. Chora or Messaria is the island’s capital noted for the beautiful churches with their fine wood-carved sanctuary screens and icons. At the southern end of the island lies the island’s former capital Driopida and in the northeastern lies Loutra, a resort with warm sulfurous spa-waters with curative qualities. Sightseeing on Kithnos includes the Church of Panagia Flambouriani, which stands in the village of Flambouria, southwest of the town of Kithnos. According to tradition, there are traces from the steps of the Virgin Mary all the way from the beach to the church. In summer, lilies blooming in the area give off their sweet smell. In the souvenir shops, one can find beautiful folk art objects, shells, leather products, ceramics and wood-carved objects, as well as fabrics woven with beautiful designs in vivid colors.

As your charter yacht glides into the port of Livadi you’ll catch your first glimpse of the towering hills of Serifos dotted with the white sugar-cube houses of Chora. The curious rock formations resemble human figures, which call to mind the myth of Danae, Perseus and Medusa, as if these prehistoric inhabitants of the island had been turned to stone. Perseus, the mythological hero that killed the medusa, the terrible monster with a woman’s face and hair as serpents was born on this island. The fortress-like monastery Moni Taxiarchon near the village of Galani houses fine wall paintings and important books and manuscripts, and is of special interest. The village of Panagia commands a panoramic view of the whole island. The greatest attraction of Serifos is its magnificent beaches. The beach of Psilli Ammos, which lies about 2 km to the east of Livadi, beckons with the softest and whitest sand. Close to the monastery of Moni Taxiarchon, there is a small village on the north coast named Platis Gialos on Platis Gialos bay, which consists of three lovely small beaches. Koutalas is a nice village with a beautiful bay and lovely beach, secluded from the winds. 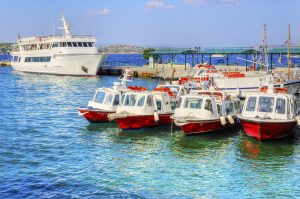 The main town of Spetses in the Saronic Islands is an old fishing village, situated on the picturesque Bay of Argolis, and spread out along a lovely beach. Fighters from Crete, who were being persecuted by the Turks, came as refugees to the land of Argolis and settled it in 1831. In the sparkling seas you’ll be able to enjoy swimming, fishing and every kind of water sport. Countless picturesque coves around the island of Spetses offer visitors’ moments of peace and tranquility. Either by land or sea, various forms of transportation make every part of the island fully accessible. One should not miss visiting the Museum of Spetses, situated in the mansion of Hadziyiannis Mexis, the mansion of heroine Laskarina Bouboulina, now a private museum, and the historical monastery of St. Nicholas, where, on April 3, 1821, the locals took the oath “Freedom or Death” and joined the revolution. 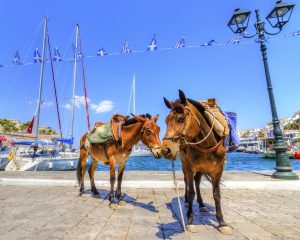 Hydra is perhaps the most beautiful port village in all of Greece. A tiny harbor, ringed with cafes, restaurants and gold shops, it is surrounded by a village of stone houses and villas built up into the hills like an amphitheater. One of the best things about Hydra is a ban on all cars. Everything is transferred and moved by donkey, including groceries, building supplies, people and their luggage. Explore the little winding alleyways and foot paths through the village. The Monastery of the Panagia is right in the port, with its entrance by the clock tower. And one of the most famous Maritime Academies in Greece is right by the harbor. 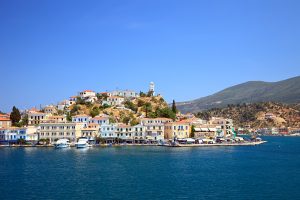 Located right next to the mainland, Poros is a lovely little island with one main village clustered next to the quay. Little ferry boats run back and forth from the main village to the mainland just across the straits. In ancient times it was two islands, Spheria and Kalavria, which gradually joined together over time by an isthmus of sand. Kalavria, the larger island, was wooded and had lots of water. Spheria, which is now the town of Poros, was a volcano. The approach by sea is probably one of the most beautiful in Greece. Start your day by visiting the Archaeological Museum in the port of Poros as well as by taking a walk as far as the clock-tower, the town’s highest point and the island’s “trademark” visual site.