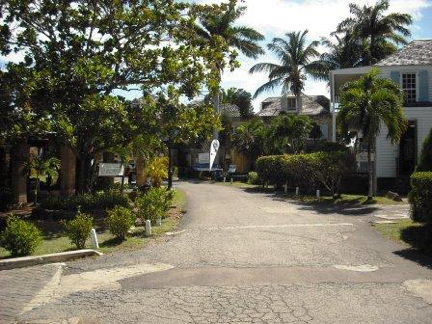 Originally called “His Majesty’s Antigua Naval Yard”, Nelson’s Dockyard located in Antigua, Caribbean, is a time capsule of colonial Caribbean naval history, and the only Georgian Period shipyard still in existence in the world. Building this shipyard, started in 1725 as a home for Britain’s Caribbean Naval Fleet needed to guard the valuable colonial sugar islands that were at that time part of the British Empire. The Dockyard grew in importance throughout the eighteenth century, as it was a safe hurricane hole, and the only harbor in the entire Eastern Caribbean large enough for safe naval ship repairs. 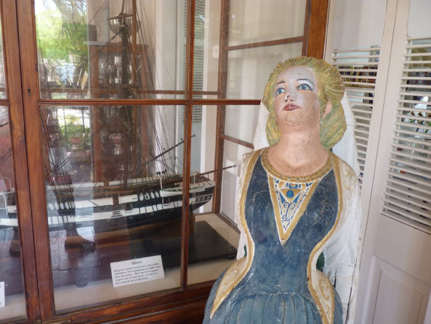 Admiral Lord Nelson was senior officer of the Naval Yard from 1784 – 1787. At that time, the yard was a bustling area from which Nelson set sail on his forays hunting the French and Dutch. It was during this time, that Nelson met his bride, Fannie Nesbit, born and raised on the neighboring island of Nevis.

Nelson’s Dockyard is now home to an international fleet of sailing yachts, many available for crewed yacht charter. The buildings built for the 18th century Naval Yard, now house support business for this modern sailing fleet. Head ashore and explore this spectacular glimpse into the Caribbean of yesteryear and have lunch perhaps at the Admiral’s Inn or the Copper and Lumber Store, both housed in original Nelson Dockyard 18th century buildings. 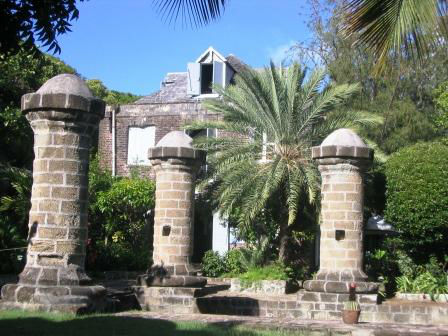 What to See on Yacht Charter in Nelson’s Dockyard, Antigua and the Surrounding Area

Now a National Park, and UNESCO World Heritage Site, Nelson’s Dockyard National Park is open daily from 8 a.m. to 6 p.m. The cost of admission is currently $8 USD and includes a guided tour as well as entry to all sites including Shirley Heights and Dow’s Hill. Tours do not run on Sundays. To have a tour and pay admission, head to the guard gate and National Park Reception Area at the top of the road into Nelson’s Dockyard to pay for admission. Join a tour or simply explore on your own. 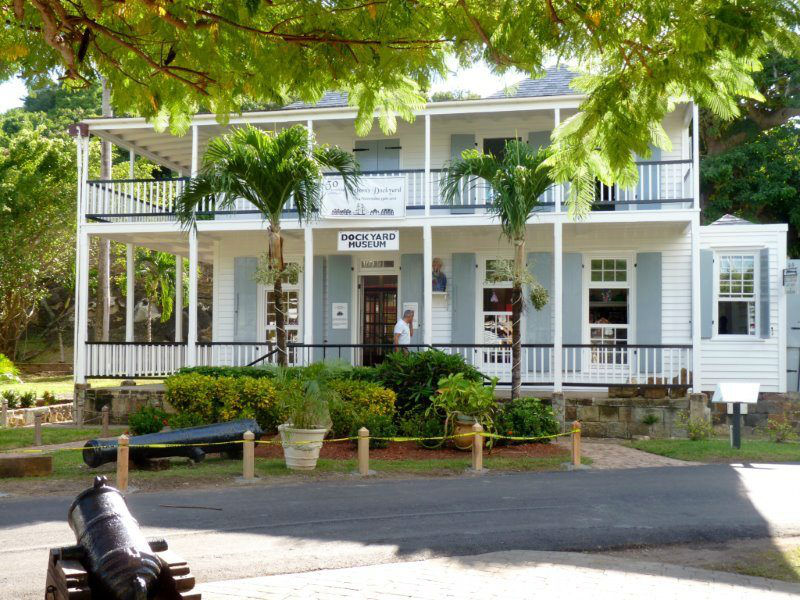 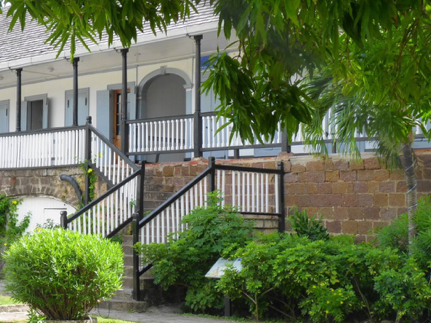 Included in the buildings and areas to be seen within Nelson’s Dockyard today are:

Naval Officer’s House (1855): Now housing the Dockyard Museum on the ground floor with artifacts found in the Dockyard area, and on the second floor, a museum about the military history of English Harbor.

Officers’ Quarters (c.1810): On the second floor, featuring a row of rooms once used for housing ship’s officers when their ship was being careened, the rooms were built over 2 water cisterns with a capacity of 1,200 tons of rainwater. Today, the Officer’s rooms house restaurants and shops.

Copper and Lumber Store (1789): Selling Copper for ship’s bottom’s and lumber for ship repairs on the ground floor, upstairs sailors hung their hammocks to sleep under a roof, for protection from the rain. Today the building houses a hotel and restaurant of the same name.

Cordage and Canvas Store (1778-1784): Originally two stories, the upper story, found to be unsafe, was removed in 1949. Remaining is the first story of this building which was where cordage and canvas was stored.

Boat House and Joiner’s Loft (1778): Built to originally house the Joiner’s and Turner’s Loft in the top story, and a small Engine House for fire engines in the ground floor. Near the main gate, this structure once also held the Yard Clock above the top floor for all to see to abide by naval regimen requirements.

Pitch and Tar Store (1788): Originally holding the Engineer’s Offices in the top floor; below, on the ground floor were stored pitch, tar and turpentine. Today this building is The Admiral’s Inn and Restaurant.

Boat House and Sail Loft (1796): Large stone columns were housed within a large building with a waterway between the columns. The pillars and waterway were used for hoisting sails off vessels, which sails were then dropped through a trap door into the sail loft. The roof of this building was lost in a hurricane in 1872, and concrete caps were subsequently made to cap the top of each of the pillars to protect against erosion. Today, the waterway and capped pillars remain.

Pay Office (1807): With stores held in the ground floor, above on the second floor, was the Pay Office, and the Commissioner’s Room. Today there are 3 shops in the building.

Seaman’s Galley (1778): When ships were in the Dockyard being careened, sailors that slept in hammocks in the top floor of the Copper and Lumber Store, were fed here. Today the building is a boutique and restaurant

Parade Ground: Located outside in the open space in front of the docks.

Careening Wheel, Capstan remains: The site of this and remains of the Capstans can be found next to the Parade Ground within the foundation remaining of the Capstan House.

Bakery: Located behind the Naval Officer’s House, no information remains on when this building was originally built. Today the bakery building holds 3 of the original ovens used to bake daily bread and is still a bakery today.

Up Ended Cannons: Captured and/or no longer safe and usable, cannons were adaptively reused as bollards to which ships could be tied when at the docks.

Long Stone Ramp (1769): Probably one of the first stone structures built, it is the oldest part of the Dockyard and was probably used to slide large pieces of lumber to the saw-pit for sawing. This stone ramp is located right next to the Dockyard Museum.

The Tartar Bell: Located over the main gate, this ship’s bell once belonged to the HMS Tartar.

Historic Graffiti: Carved into the walls of the water cistern of a shop located right outside the main gat;, what remains are good examples of sailor’s graffiti carved as early as the 1740’s. 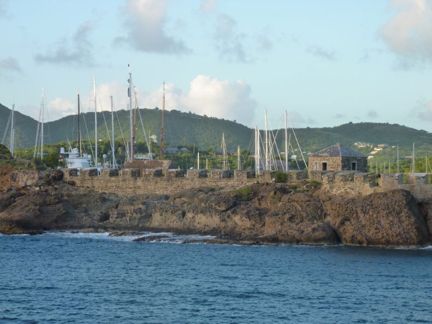 In the surrounding area, not within the Dockyard, but included in the National Park are other sites to be visited:

Dow’s Hill Interpretation Center: See a 15-minute presentation on the history and culture of the island.

Shirley Heights: Located to the east of English Harbor, Shirley Heights, named after General Shirley, was a military lookout and gun battery for protection of English Harbor. Today, several original buildings and battlements remain, and every Sunday afternoon there is a great “Jump-Up” with steel drums and barbecue.

Fort Charlotte: Built to the east of the natural opening to English Harbor, this fort was built on the top of a naturally occurring landmark known as the Pillars of Hercules

Fort George: Built on the top of Monk’s Hill in the 1680’s, this fort was intended as refuge for Islanders in the case of invasion before Nelson’s Dockyard was built.

Fort Berkeley: Built high on the bluffs at the mouth of English Harbor before the Dockyard, this fort was intended to protect English Harbor in case of invasion, and housed at one time, 25 large cannons. 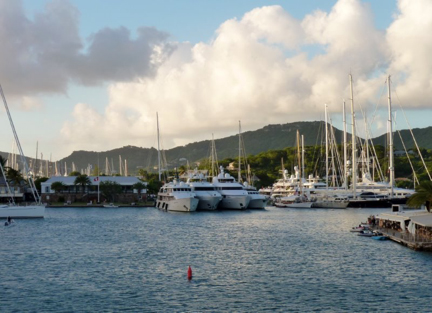 The southern end of the island of Antigua has the island’s best natural harbors, which was known in Nelson’s day and is true still today. Cruise in and tie up stern to in English Harbor right within the Dockyard, just as Nelson’s Navy did so many centuries ago. 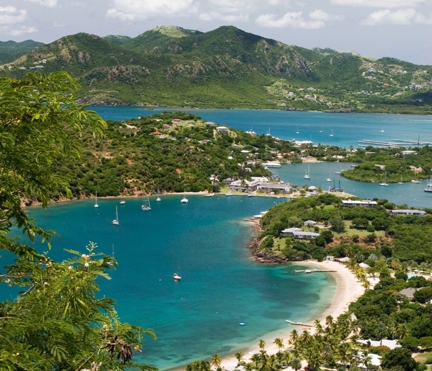