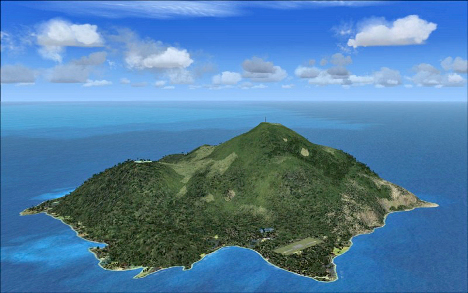 Saba, once the smallest island of the Netherlands Antilles, in 2010, this island became the smallest island of the Kingdom of the Netherlands, when the Saba became a special municipality within this country after the dissolution of the Netherlands Antilles. Saba was heavily influenced during colonial times by several centuries of Dutch rule. While English is spoken by everyone, Dutch is still the official island language. In fact, the name Saba is believed to be derived from the Dutch word for “shoe”, which was, at one time, the main industry on the island. Although also a haven for pirates, the most notable native Saban pirate being Hiriam Breakes, who famously quipped “Dead Men Tell No Tales, ” Saba has a rich and varied history.

Today, as part of the Netherlands, Sabans vote for members of the Dutch House of Representatives, and those with Dutch nationality vote in elections for the Electoral College to elect members of the Dutch Senate. The island governor is the head of the government of Saba, which the Dutch monarch appoints for a term of six years.

Saba, a small island of only 5 square miles, rises straight out of the sea to the top of Mt. Scenery, a dormant volcano. Covered with tropical rainforests, the virtually round shaped island has few safe anchorages, and sometimes an overnight stay is not possible. 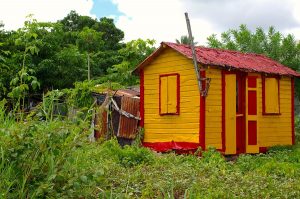 The island residents, numbering only around 1500, trace their roots back to a handful of families with Dutch, Scottish and African heritage. Farming is difficult in the steep rocky island terrain and therefore, younger generations tend to take to the sea, and many find their way to other Caribbean islands to live. 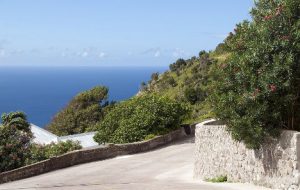 There is one road on Saba, called “The Road”, which connects the harbor with “The Bottom”, one of the four villages on the island, with the top of the peak of Mt. Scenery. The Road is full of hairpin turns as it rises to the top of the island, making the drive its own adventure.

Saba is a well-known dive location; however, the diving is not for the faint of heart and hiring a local dive guide is recommended. As the island plunges straight into the sea, diving is right around the perimeter of the island with a great diversity of underwater marine life and coral.

In the 1870’s a young lady from Saba was sent to a convent in Caracas, Venezuela and there learned the difficult craft of “Spanish lace”. On returning to Saba, this craft was taught to the local women and a cottage industry of lace making was born. Now known as Saba Lace, be sure to look for this for purchase as a special remembrance of this unique island.

What to See and Do on Yacht Charter on Saba Island, Kingdom of the Netherlands, Caribbean

Scuba Diving: Close along the coast is world class scuba diving around the island, however given the currents, and seas, a local dive guide is recommended. There are 30 dive sites around this tiny island that vary in type and difficulty. 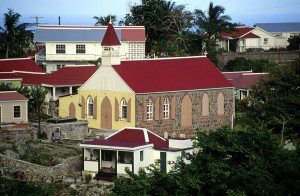 Local Church in The Bottom

The Bottom: The “capital” of Saba, here are located the administrative buildings for the island, and other municipal buildings along with several churches and cemeteries. This is a very quiet village, from which several hikes originate.

Windwardside: A livelier village, there are a number of restaurants, boutique shops, the Dutch Museum, the start of the hike up to the top of Mount Scenery, and scuba diving shops.

Mount Scenery: A dormant volcano that last erupted in 1640, Mount Scenery is the highest point in the Kingdom of the Netherlands. It is about a 3 hour hike to the top through the island rainforest. Wear good hiking shoes as the trail is rough in places, and can be slippery from mist and rain. There is a great view at the top, if the weather is clear. 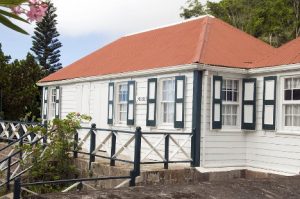 Saban Dutch Museum: Located in a traditional Saban cottage in Windwardside, the collection inside is that inherited by the Owner of the museum, Rene, from many centuries of his Saban family. There are Dutch tiles from the 1600’s and other antiques and religious relics from the 1700’s and 1800’s including paintings, lace, and Chinese porcelain related to the Dutch West Indies company that established Saba as a trading post.

Tide Pools: Surrounded by lava flows with Mount Scenery looming behind, this is a beautiful location starring the various colors of the red hued lava flows, blue green water, and the green mountainside behind. Wear good hiking shoes to hike to the Tide Pools and a bathing suit for a refreshing swim in the flat calm waters. 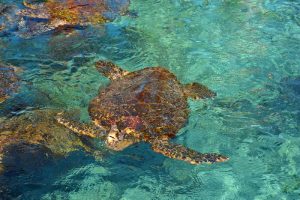 Saba National Marine Park: This marine park is a top scuba diving location especially famous for the Pinnacle Dive. For scuba divers there are walls, coral gardens, pinnacles, and lots of protected marine underwater life. Snorkeling in parts of the park over shallow coral gardens is also excellent.