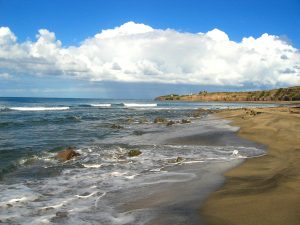 A quiet little island in the Caribbean, covering barely 8 square miles, St. Eustatius was once a center of commercial enterprise in the 1700’s. Known to the locals as Statia, this once bustling island has a full time population today of just a little over 3000. However, at its zenith in the 1700’s there were many more residents, many very wealthy from trade. Under the command of the Dutch West India Company, Statia was a duty free neutral trading port, with a large protected harbor sitting right in the middle of British, French and Spanish Caribbean Islands. Statia’s economy flourished in the 1700’s from trade and the island became known as “The Golden Rock”. 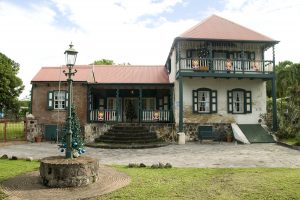 Statia merchants sold arms and munitions to anyone that had the money. A big purchasing client happened to be the American 13 Colonies, who purchased from Statia merchants many of the arms and munitions needed to wage the Revolutionary War to win freedom from British Rule. Indeed, it was from the tiny island of Statia that the newly declared independent country of America received first acknowledgement of sovereign status when the American flag yacht Andrew Doria received an 11 gun salute on arrival in Statia Harbor. 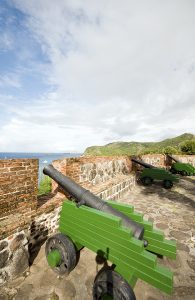 As a neutral, duty free island, Statia was a bustling island in the 1700’s. Great warehouses were built along the coastline and harbor front. There was a large Jewish population, and a synagogue was built in 1737 with a Jewish Cemetery. Since falling into ruins, both the synagogue and cemetery have been restored and stabilized; with the synagogue walls, still awaiting a roof. The stabilized walls can be seen today along with the respectfully restored Jewish cemetery sitting next to the communal cemetery. 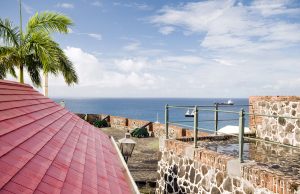 Nearly half of the military supplies George Washington needed to fight the Revolutionary War were obtained from St. Eustatius. England took this very seriously, and declared war against the Netherlands, sending British war ships, under Admiral George Brydges Rodney to conquer the island, an easy feat. Statia came under British Rule, and the trading commerce on the island came to a screeching halt. Many islanders fled Statia, and under Admiral Rodney many male Jews were imprisoned or deported, while wealthy Jewish warehouses, homes and even Jewish graves were plundered and violated. Admiral Rodney found booty on Statia that far exceeded his expectations, and with dreams of untold wealth, he stayed on the island looking for money and precious goods well after being ordered by British Parliament to leave Statia and sail to the Chesapeake Bay to the aid of General Cornwallis, the head of the British Army during the Revolutionary War. Rodney delayed his departure, intent on laying claim to more surrendered valuable goods, until it was too late and Cornwallis, without British aid, was forced accept defeat for Britain and surrender to General Washington. 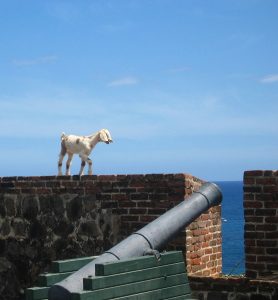 Today, an island that once had over 10,000 people, is a very quiet island, with most of the population living between the dormant volcano Quill and Boven Mountain. The only anchorage is next to the main town in which from time to time, there can be a swell from the north depending on winds. Scuba diving and snorkeling are fantastic around this quiet island, with very little underwater disturbed due to the very few visitors to this island. There are over 200 shipwrecks to be explored underwater, along with artifacts left from the diverse history. While above water are ruins left from the flourishing 1700’s including many warehouses, the Old Dutch Reform Church and the synagogue. There are several museums to visit including the Lynch Plantation Museum and the Statia Historical Foundation Museum, along with the Miriam C. Schmidt Botanical Gardens, and the 17th century Fort Oranje.

What to See and Do on Yacht Charter on St. Eustacia, The Kingdom of the Netherlands, Caribbean

Eustatius National Marine Park: Within the park, dive sites range from coral reefs to shipwrecks, and the Blue Bead Hole, where many find blue beads once used by slaves as currency.

Statia Historical Foundation Museum: Located in an 18th century mansion built by Simon Doncker, a wealthy local merchant, the museum includes exhibits of island life including colonial trade, slavery, Statia’s Jewish Community, and the famous “First Salute” to the U.S. Upstairs rooms feature furniture from the colonial period. Outside is a blacksmith shop.

Fort Oranje: Nicely restored, within are cannons, and cobblestone parade grounds, along with barracks, the former governor’s and commander’s residence, and a jail. A terrific view is available from the top of the fort walls. The current stone structure was built by the British in 1703, and from this fort the first shot was fired in recognition of U.S. Independence on November 16, 1776, a date now commemorated as Statia Day.

Jewish Synagogue Ruins: Located in Oranjestad, are the ruins of the Honen Dalim Synagogue. Now without a roof, the synagogue was built in 1739 from yellow brick used as ballast on Dutch ships. This synagogue was the center of Jewish life on Statia for nearly 100 years. On the side of the synagogue are the steps to the mikvah (cleansing bath for women). Also located in Orangestad is the Jewish Cemetery, with a handful of still standing graves. Once this graveyard was used to hide Jewish wealth from the plundering British by burying gold, silver and jewels rather than the deceased.

Fort de Windt: Today a great location for a views of St. Kitts, this clifftop fort was completed in 1756 to watch the shipping lanes between the island and St. Kitts. The fort was abandoned in 1815, with two cannon remaining on the top of fort walls today. This is a great location to watch for whales if you are on the island between January and April.

Lynch Plantation Museum: Known also as the Berkel Family Plantation and the Berkel’s Domestic Museum, these two one-room buildings are replicas of this once wealthy family’s houses which were built in honor of the matriarch’s 100th birthday. Within is a collection of family memorabilia that provides a unique look at life on the island 100 years ago. Included are furnishings, farming and fishing equipment, pictures, and even eyeglasses. A family member must be called for an arranged tour.

Miriam C Schmidt Botanical Gardens: Located on the eastern slopes of the Quill Volcano, these gardens are currently being restored after damage from hurricanes, drought and roaming animals, however there are a number if interesting species. The road to the Gardens is often impassable, so best to access by foot along the Bird Trail, a side trail of the Around the Mountain Trail.

Dutch Reformed Church: Church ruins in Oranjestad built for worship of the Dutch Reformed Religion in 1755. In 1792, the roof collapsed in a hurricane, and the building has remained roofless ever since. Around the church are the burial spots of some of the most prominent citizens from the island’s heyday.

Quill National Park: Surrounding the now dormant volcano known simply as The Quill, this is a top location for hiking through island rain forests to the crater of the volcano. Within the park, in the crater, is a bird watcher’s paradise, as this area is home to many rare species including the red necked pigeon and the purple throated Carib. Also found within the park are many species of orchid.

Historic Snorkeling: Unique to this island is the opportunity to snorkel through the foundations of old warehouses and along the old sea wall, dating from when this island was at the height of its history as a wealthy trading center. Perhaps find within the rocks of the crumbling sea wall or around foundations bits of clay pipes, and other artifacts from the 1600’s and 1700’s.