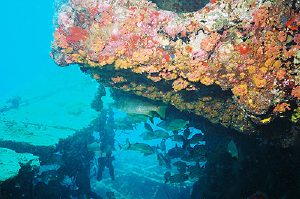 The luxury British Royal Mail Steamer, RMS Rhone, commonly referred just as the Rhone, was wrecked in the British Virgin Islands between Salt Island and Norman Island on October 29, 1867, during a massive hurricane. The Rhone, built in 1865, was considered by the Royal British Navy to be one of two unsinkable ships, with the other being the Titanic. Both ships proved the Royal British Navy to be very wrong. Sunk in shallow waters, this is one of the few ship wrecks that today can be explored by snorkeling.  The wreck can also be explored as well by scuba diving when stopping at the Wreck of the RMS Rhone on BVI yacht charter. 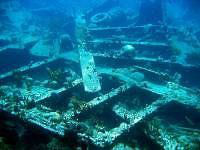 Built at the Millwall Iron Works in Southampton, England, the Rhone was 310 feet long with a 40 foot beam. Sporting two masts, the Rhone was a favorite with passengers, as she sailed along at 14 knots, an almost unheard of speed at that time. Carrying cargo, the Rhone also had lavish passenger staterooms, with 253 first class staterooms, 30 second class cabins, and 30 third class cabins. Just prior to the sinking, the Rhone had come alongside RMS Conway to refuel in Great Harbor on Peter Island on what appeared to be just one more beautiful Caribbean day. As the skies darkened and the barometer dropped, both Captains realized that bad weather loomed. It was decided that all passengers would be transferred from the Conway to the unsinkable Rhone, and that the Conway would make way to Roadtown Harbor in Tortola while the Rhone headed out to weather the storm at sea.

The Conway never made safety in Roadtown Harbor and was caught by the tail end of the storm, foundering off of the south side of Tortola with the loss of all hands. Overall, in this massive hurricane over 80 ships were sunk in the U.S and British Virgin Islands with a loss of over 500 lives.

With all passengers strapped to their beds, as was the norm at that time for safety under hurricane conditions, the Rhone attempted to head out to the open seas. As the Rhone came around between Peter Island and Salt Island the tail end of the storm caught the ship and tossed it onto Black Rock Point. The Rhone split in half, causing cold water to come into contact with the hot boilers, which then exploded sending the rest of the ship to the bottom. Sadly of the 143 passengers on board, plus an unknown number that were transferred on board from the Conway, only 23 crew survived. Many of the dead were buried on nearby Salt Island. 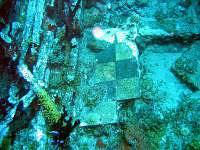 As the waters were shallow, the mast of the Rhone was still to be seen sticking up from the water, until the 1950’s when the Royal British Navy deemed the mast and wreck to be a maritime hazard and sunk the ship further into the waters. In 1967, the area was named a National Park and now is one of the best snorkel and dive sites for exploration of a wreck in the Caribbean. As the wreck is still in relatively shallow waters from depths of 20 to 80 feet, much is seen by snorkelers, and the diving is considered relatively easy.

The most popular and well known of all the BVI dive sites, the Royal Mail Steamer Rhone was also the setting for the movie “The Deep” with Nick Nolte and Jacqueline Bissett. Today she is decorated by a wide variety of corals and is home to several resident barracuda, sea turtles, stingrays, angelfish, yellowtail snappers and other colorful Caribbean marine life, and stopping at the Wreck of the Rhone on a yacht charter is the easiest way to experience this unique shipwreck, and a great stop on a yacht charter in the British Virgin Islands.

Nearby Salt Island lives up to its name as a once thriving location for salt harvesting from the salt ponds. Previously an important source of salt for the Royal British Navy, Salt Island now boasts one inhabitant overseeing the island and once active salt ponds still sends the required bag of salt each year to the English Monarch.