Enjoy a Yacht Charter Through the Secret Aeolian Islands, Italy 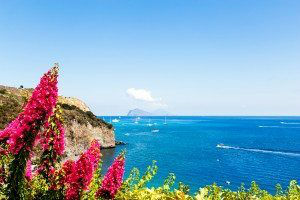 Aeolian Islands, Sicily, Italy with a View of the Stromboli volcano

Off of the northeastern corner of Sicily, the Aeolian Islands were more well known in Ancient Times than today,  yet they are the same lovely islands that the Romans enjoyed in centuries past.  Nature’s Lighthouse, the constantly erupting volcano on Stromboli Island, used as a maritime navigation marker in Ancient Times, is still erupting regularly over 2000 years later.  The tiny little island of Panarea is a chic get away island, while Lipari, has a quaint fishing village harbor where life moves at a slow and relaxed pace.  Enjoy a yacht charter cruise on a luxury charter yacht out of Milazzo, Sicily and discover the Aeolian Islands for yourself.

Sicily and the Aeolian Islands 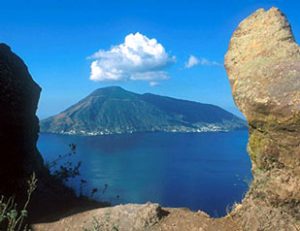 Board in Milazzo, Sicily.  After settling in, wander around Milazzo, a town with written history dating back to 716 BCE. Visit the medieval castle built during the Norman era. Located on the edge of town, the castle is one of Sicily’s best kept secrets and well worth a visit if you’re a lover of medieval military architecture.

Later in the afternoon, it’s a quick trip to the Island of Vulcano. According to mythology, this island was the workplace of Hepheastus, god of fire and blacksmiths. Vulcano, dominated by an active crater, offers mud pools and hot mineral springs bubbling up from the seabed, allowing bathers to select their ideal sea temperature by moving to and from the numerous springs.  This is an ideal area in which to dive as the waters team with rainbow fish and anemones.

Greet the day with a swim before breakfast. Then sail to Filicudi to explore the prehistoric village ruins on the Capo Graziano promontory. Snorkel after lunch and sunbathe as you cruise to Lipari to overnight. 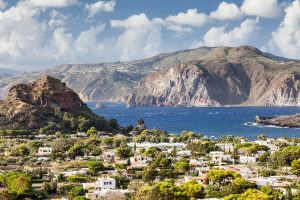 Start the day with a walk around the old town on this main island of the archipelago. Lipari is the largest island and offers a wide selection of shops and restaurants. Visit the excellent Aeolian Museum, which exhibits archaeological exhibits from prehistory to Norman times. Later, hike to the top of Mount Sant’Angelo for a breathtaking view. Return to the yacht for a late swim and cocktails on the aft deck.

After breakfast, cruise to Stromboli, the northernmost island of the archipelago and the most spectacular for its continuously active volcano, dubbed ‘the lighthouse of the Mediterranean’ from ancient times to the present. To hike up the volcano for a view from the “Sciara del Fuoco”, allow three hours for the climb up and two for the descent. Stromboli is also a great place for experienced divers but not recommended for beginners.  Return to the yacht for dinner and a steam to Salina to overnight.

Awake in the “Garden Island”, so named for its rich cultivation, especially with vineyards.  Salina is the perfect place to purchase delicious local capers and the famous Malvasia delle Lipari wine. After shopping enjoy snorkeling or diving. Hikers will enjoy a vigorous walk as Salina has the highest mountain in the islands and numerous hiking trails. Later, cruise to Panerea for an evening in a town known for the jet-set party crowd. Panerea is tiny compared to the other islands but picturesque with its stark white houses and brilliant yellow genestra bushes.

Enjoy one last snorkel or dive before cruising back to Milazzo to disembark.