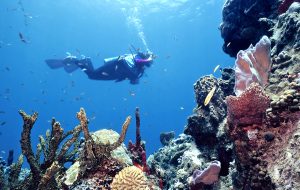 Scuba Diving in the Caribbean

Scuba Diving is a great way to explore the secrets that lie below the water’s surface in the British Virgin Islands, including ship wrecks, and beautiful coral walls, filled with tropical fish.  Several of the top scuba diving locations in the British Virgin Islands are included in this suggested yacht charter itinerary, for certified divers to enjoy scuba diving right from their private charter yacht.

Scuba Dive through the Caribbean on Yacht Charter 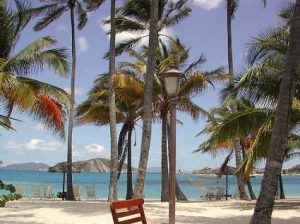 Board in the West End of Tortola; once home to fierce pirates, including Blackbeard. Imagine pirate lookouts stationed on the high hills surrounding Soper’s Hole; on the lookout for enemy or ships to plunder.

Sail to White Bay, so named for its long white sand beach, on Peter Island to enjoy your first lunch on board, followed by a refreshing swim.  This is a fabulous location for swimming, watersports, relaxing in the sun or a re-introduction to scuba diving.

Sail to Norman Island, another haven for pirates long ago, to snorkel the caves said to be the burying spot for stolen treasures and the setting for Robert Louis Stevenson’s book “Treasure Island.” Pirates hid their ships in this deep indented anchorage called “The Bight”, hidden from sight, to sneak up on passing ships.  Close by for scuba diving, are The Indians, a marine park surrounding an outcrop of rocks with a reef that drops off for great underwater life, where you never know what you might see.

Continue in the afternoon to Deadman’s Bay: location of Deadman’s Island where supposedly Blackbeard left his pirates with their barrel of rum ashore.  This marooning inspired the popular 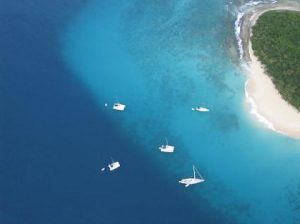 The bight at Norman Island

poem: “16 Men and a Deadman’s Chest.” This is one of the most beautiful bays in the BVIs.

Enjoy scuba diving here on the Coral Gardens or “The Black Forest”, a mini reef wall off Peter Island, named for the endangered black coral found there, along with a variety of fish including the long snout butterfly fish, creole wrasses and blue tangs.

This is an excellent bay for water sports and swimming.  Or, sit back and relax with a massage at the exclusive Peter Island Resort.  Have dinner on deck on anchor across from the lights of Roadtown, Tortola.

Anyone wanting a bit of exercise should wake up early and visit the Iguanas sunning on the rocks at Sprat Bay, or hike the Peter Island sunset loop; a walk that includes panoramic views over the Virgin Islands.

After breakfast, sail to anchor off nearby Salt Island. Salt Island is home to the wreck of the H.M.S. Rhone, one of the best wreck sites in the world with beginner and advanced scuba diving.

Built at the Millwall Iron Works in Southampton, England, the Rhone was 310 feet long with a 40-foot beam.  Sporting two masts, the Rhone was a favorite with passengers, as she sailed along at 14 knots, an almost unheard of speed at that time.  Carrying cargo, the Rhone also had lavish passenger staterooms, with 253 first class staterooms, 30 second class cabins, and 30 third class cabins.  Just prior to the sinking, the Rhone had come alongside RMS Conway to refuel in Great Harbor on Peter Island.  As the skies darkened and the barometer dropped, it was decided that all passengers would be transferred from the Conway to the unsinkable Rhone, and that the Conway would make way to Roadtown Harbor in Tortola and the Rhone would head out to weather the storm at sea.

The Conway never made safety in Roadtown Harbor and was caught by the tail end of the storm, foundering off the south side of Tortola with the loss of all hands.

With all passengers strapped to their beds, as was the norm at that time for safety under hurricane conditions, the Rhone attempted to head out to the open seas.  As the Rhone came around between Peter Island and Salt Island the tail end of the storm caught the ship and tossed it onto Black Rock Point.  The Rhone split in half, causing cold water to come into contact with the hot boilers, which then exploded sending the rest of the ship to the bottom.  Sadly, of the 143 passengers on board, plus an unknown number that were transferred on board from the Conway, only 23 crew survived.  Many of the dead were buried on nearby Salt Island.

As the waters were shallow, the mast of the Rhone was still to be seen sticking up from the water until the 1950’s when the Royal British Navy deemed the mast and wreck to be a maritime hazard and sunk the ship further into the waters.  In 1967, the area was named a National Park and now is one of the best dive sites in which to explore a wreck in the Caribbean.  As the wreck is still in relatively shallow waters from depths of 20 to 80 feet, much is seen by snorkelers, and the diving is considered relatively easy.

The most popular and well known of all the BVI dive sites, the Royal Mail Steamer “Rhone” was also the setting for the movie “The Deep” with Nick Nolte and Jacqueline Bissett. Today she is decorated by a wide variety of corals and is home to several resident barracuda, sea turtles, stingrays, angelfish, yellowtail snappers and other Caribbean sea life.

Nearby Salt Island lives up to its name as a once thriving sea salt production locations, with sea salt harvested from the salt ponds.  Previously an important source of salt for the Royal British Navy, Salt Island now boasts one inhabitant overseeing the island and once active salt ponds.

At 310 feet long and 40 feet wide, the wreck of the RMS Rhone lies in two main parts in waters between 30 and 90 feet deep. Much of it is still intact and visible, including decking, parts of the rigging, the steam engine, and propeller. Numerous artifacts from 1867 are still visible today. You’ll also see where the 1977 film classic The Deep was shot. Swim through the amazingly intact bow section as well as under the stern near the large 15 ft propeller. Get a feel for the size of the RMS Rhone when you swim down the length of the massive driveshaft towards the engine box and gears.  No matter how many times you dive on the Rhone, you will still see something new. 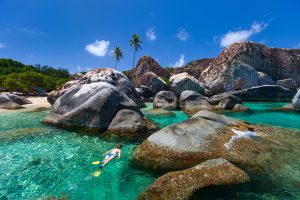 “Wreck Alley” seen at 50-85 feet is for intermediate scuba divers. This triple wreck site consists of the Marie L, a cargo boat intentionally sunk in the early 1990s; the Pat, a tugboat sunk a few years later that now lies up against the Marie L; and the Beata, sunk in 2001. The wrecks are home to a large colony of garden eels and stingrays.  Time on the wrecks is limited due to the depth so the dive is completed on the shallower reef (about 50 ft).

If you need a break, enjoy a lovely sail up Drake’s Channel to Virgin Gorda, stopping at the world famous geologically mysterious Baths, where house-sized boulders create fascinating juxtaposing pools and grottoes to explore. Snorkel amongst these huge boulders along the shoreline or climb to the land at the top of the park for a panoramic view of the BVIs and some local shopping. 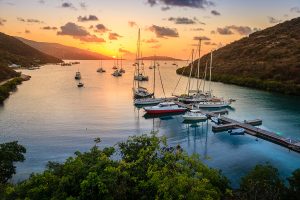 Cruise to Mountain Point Virgin Gorda and the Bitter End. Mountain Point has great snorkeling and scuba diving along with a fabulous sunset view of Tortola and the Dog Islands. Check out the Rhone’s anchor leaning against Saba Rock at the Bitter End, and enjoy local entertainment and shopping ashore for those seeking local flavour. The flat clear waters of North Sound are perfect for a variety of watersports.

Mountain Point is for novice scuba divers to explore another wreck.  The boat lies in 25 ft of water and the reef slopes away to the west to a maximum of 70 ft. The sand at the bottom of the slope is often visited by eagle rays and stingrays while the shallows around the mooring containing many swim-through rock formations, and shallow grottos. 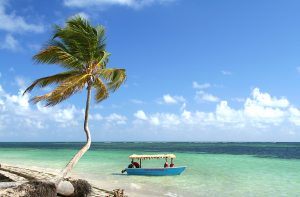 Head to Anegada Island. Anegada, a long low sandy island, 10 miles long and 2 miles wide, which is surrounded by one of the largest reef systems in the world, Horseshoe Reef. These waters are littered with shipwrecks, and on shore are beautiful deserted long white sand beaches. Enjoy an island tour to check out the local pink flamingos, or try your hand at stalking the elusive bonefish on the shallow flats (local bone fishing guide and flat-bottomed boat recommended). On the north side of the island is a reef drop off which is great for scuba diving.  This reef is home to many Caribbean lobsters.  A specialty of  island restaurants is barbecued lobsters cooked in local style in oil drum barbecues. Reservations recommended in advance for dining ashore. 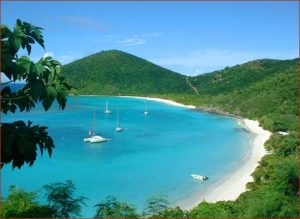 Cruise to Jost Van Dyke stopping at Sandy Cay on the way. This is a  perfect location for a beach picnic on the glowing white sand beache. After relaxing and enjoying water fun, cruise to White Bay on Jost Van Dyke and relax with a view of turquoise waters, and palm tree lined beaches.  This is a great spot for water toy fun.

In the evening, visit Foxy’s ashore for a cocktail, or head to Foxy’s after dinner to dance the night away.  Another spot to visit is the Soggy Dollar Bar, home to the Painkiller; an aptly named cocktail, as rum is hidden within what tastes like a lovely tropical drink, served at this aptly named bar, as patrons must swim ashore for a bar stool, presenting many soggy dollars for payment. 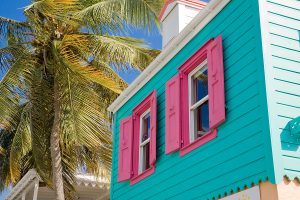 In the morning, have a last swim in the beautiful BVI waters, before returning to the West End of Tortola. Maybe make a quick trip ashore to the various shops in Soper’s Hole or for one last Pusser’s Rum “Painkiller”, at the Pusser’s Rum Restaurant before departing to head home.