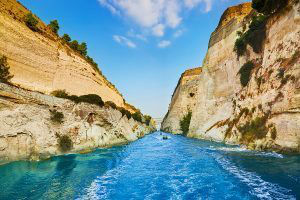 To access the Ionian Islands from Greece requires either an extended cruise around the tip of the Peloponnesian Peninsula or a much quicker trip through the Corinth Canal cutting across an isthmus between the main land of Greece and the Peloponnesian Peninsula. While the ancient Greek and Romans considered a canal in this location, the Corinth Canal was finally built between the years of 1881 and 1893 specifically to shorten the sea voyage from Athens to the Ionian islands and the west coast of Greece. The Corinth Canal, while saving a 400 kilometer sea voyage around the tip of the Peloponnesian Peninsula, is only 21 meters wide, being built to size requirements of the late 1800’s. Only small ships can traverse the canal. However this will include all but the largest crewed charter yachts available, and a trip through this canal is a true experience.

Below, is a suggested itinerary for this island chain. 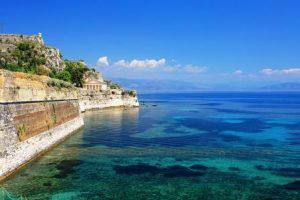 Corfu is the most fought-over, romantic and cosmopolitan of all the Ionian Islands. Homer tells us Odysseus found shelter in Corfu at the end of his wanderings. Corfu Town is presided over by two imposing Venetian fortresses and Renaissance-style city squares. Enjoy its museums and the sound and light show at the old fort.

Anchor between Kanoni and Mouse Island on the tip of a small peninsula south of Corfu’s town center to visit the much photographed Monastery of Vlachema. Visit the tiny island of Pondikonissi, crowned by a 13th Century church, or enjoy a round at the excellent Corfu Golf club. 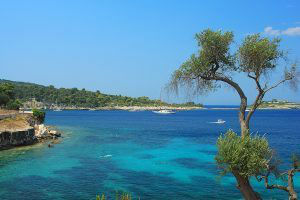 Fifteen miles south of Corfu sits tiny Paxos, a major producer of fine olive oil with some orchards dating back to the Venetian occupation (1204-1550). Seven spectacular caves on the western coast include Ipapanti, Homer’s cave.

Navigate the ancient Levkas Canal and enter the charming harbor of Lefkada, named for the white cliff from which Sappho supposedly flung herself in the 6th century B.C. Shops around the harbor sell traditional lace. 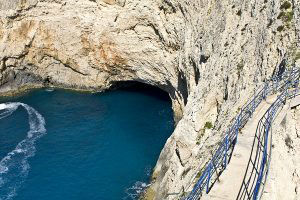 En route to Ithaki you will see many Cqiques, the traditional sailing boat of Greece. Ithaca town is a small, hospitable place full of Homerian history and coves with crystal-clear water. 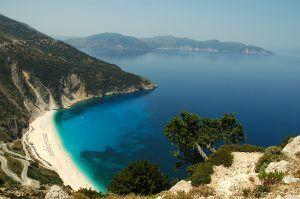 Kefalonia is the largest island with forests offering beautiful walks. Kefalonian wines are unlike those of the rest of Greece due to the introduction of the Robola grape in the 13th century. The archetypical fishing village of Fiskardo is popular with visiting yachts. 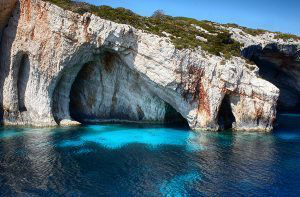 Zakinthos is reminiscent of Venice. In fact, Venetians colonized it. On one side of the port is St Dennis Cathedral and on the other side the picturesque Main Town. The view of the port and the town from above is simply breath taking and even more enjoyable from one of the many open-air cafes.

From Itea in the Gulf of Corinth you will visit Delphi which the ancients considered the center of the world and whose oracle was the most revered.

To reach the final destination of Athens transit the Corinth Canal, which is 3.2 miles long and 81 feet wide. It cuts through limestone cliffs that rise to a height of 260 feet. Depart in Athens. 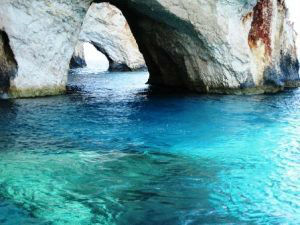