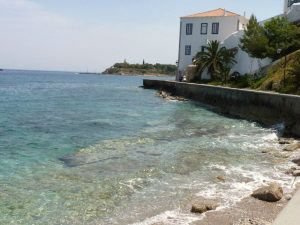 The Saronic Islands are so named as many of them are located within the Saronic Gulf of the Aegean Sea. As this is the closest island chain to Athens, it is easy to be away from mainland life and into island life quickly when embarking from Athens. And a number of islands can be seen before returning to Athens, as they are all in close proximity, including good harbors located on the Peloponnesian Peninsula.

Following is an itinerary for this island chain including the great harbors along the Peloponnesian Peninsula. 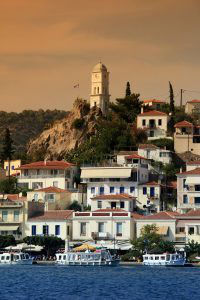 ATHENS – POROS – 31 Miles: called Kalavria in ancient times, Poros was the island of Poseidon, god of the sea. The town of Poros is actually an island separated by a small canal from the rest of the main island. In ancient times it was two islands, Spheria and Kalavria, which was gradually joined by an isthmus of sand. Kalavria, the larger island was wooded and had lots of water. Spheria, which is now Poros town, was a volcano. The approach by sea is probably one of the most beautiful in Greece.

Upon arriving, start your day by visiting the Archaeological Museum in the port of Poros. Then, take a walk as far as the clock tower, the town’s highest point and the island’s “trademark”. 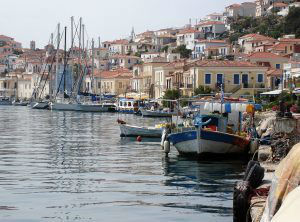 POROS – HYDRA 14 Miles: Hydra is perhaps the most beautiful port village in all of Greece. A tiny harbor ringed with cafes, restaurants and gold shops, it is surrounded by a village of stone houses and villas that rise up the hills like an amphitheatre. One of the best things about Hydra is that there are no cars. Everything is transferred and moved by donkey, including groceries, building supplies, people and their luggage. There is a foreign press shop on the waterfront where you can get your International Herald Tribune, USA Today, The Athens News and papers from just about any country. The Monastery of the Panagia is right in the port, with its entrance by the clock tower. 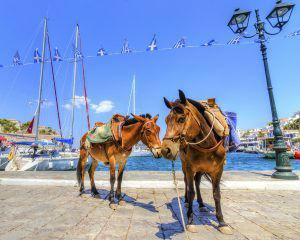 HYDRA – SPETSES 17 Miles: Unforgettable scenes of natural beauty are created by the harmonic combination of crystal clear waters and ageing pine trees. Countless picturesque coves, around the island of Spetses, offer visitors moments of peace and tranquility. Either by land or sea various forms of transportation make every part of the island fully accessible.

One should not miss visiting the Museum of Spetses, situated at the mansion of Hadziyiannis Mexis (one of the wealthiest leading activists of that era), the main mansion of heroine Laskarina Bouboulina, now a private museum and the historical monastery of St. Nicholas, where on April 3, 1821, the locals took the oath “Freedom Or Death” and joined the revolution. Visit ‘Patrali’ near the waterfront in Kounoupitsa for fish dishes. ‘Exedra Taverna’ on the old harbor front is great for fresh fish and Greek specialties. 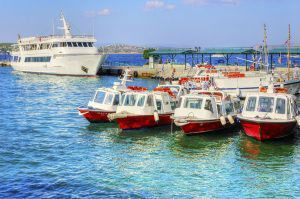 SPETSES – TOLO – NAFPLION – 27 Miles: is an old fishing village, situated on the picturesque Bay of Argolis spread out along a lovely beach. Fighters from Crete who, after being persecuted by the Turks, came as refugees to the land of Argolis and settled in this area founded it in 1831. In its sparkling sea you’ll be able to enjoy swimming, fishing and every kind of water sport. Tolo offers a great variety of taverns, bouzouki clubs, cafes and other family-run businesses that offer the homey hospitality that has come to characterize the place.

NAFPLION: The city beach, Arvanithia, is located just on the other side of town where Nafplion was founded 4000 years ago. You can enjoy swimming and water sports like canoeing, windsurfing, paragliding, jet skiing and more. There is an interesting bar on the beach, the ‘Enalion’, where you can enjoy Greek appetizers with a glass of ouzo, and try ‘Ouzo Karoni’ which has been bottled in Nafplio since 1869, by the same family, using the same recipe. Of particular interest is the shop, which makes handmade bouzouki and other stringed instruments. If you are in the market for a baglama, guitar, bouzouki or even a hand-made flute, then this is where the pros go. 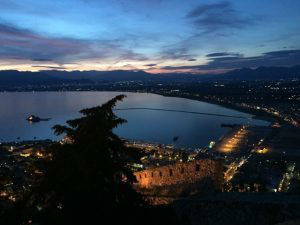 The modern name of ‘Porto Heli’ – also known as ‘Porto Cheli’ – translates to ‘The Bay of Eels’, which was the mainstay of the fishing industry here some years ago. The fishermen here continue to go about their business and farming is the other main industry in the area.

PORT HELI – ERMIONI 15 Miles: is a quaint little Greek village. It’s placed on a little piece of land jutting into the sea, which is only 4 blocks wide at the largest part and about a mile and a half long. The lack of anything resembling a sandy beach has saved it from the mass impact of tourism but that doesn’t mean there is no great swimming there, or tourists.

Ermioni has a market day every Thursday, which is worth a visit to purchase fresh fruits and vegetables while mingling with the locals.
Ermioni also offers great diving adventures. Explore the Ermioni reefs, which have a drop off up to 45m (for advanced divers) or dive the blue reef.

ERMIONI – MONI – AEGINA – 25 Miles: The name “Moni” originates from the fact that the Monastery of Chrysoleontissa formerly owned it, though now the Touring Club of Greece owns it.

It is inhabited mainly by its wildlife: rabbits, Cretan mountain goats, miniature horses and peacocks who will rush down to the boat when you land looking for food. Moni is a predominantly rocky island, covered in wild sage, mountain herbs, purple thyme and caper bushes.

AEGINA: The most important archaeological site lies to the east of the island near Agia Marina, where the temple of Aphaia, the ancient goddess of Aegina, is situated. The first temple was erected in 570 B.C. and destroyed some sixty years later. The temple, whose remains we see today, was built on the same spot out of limestone from the vicinity. Traces of the original temple can be seen in the foundations of this Doric building. 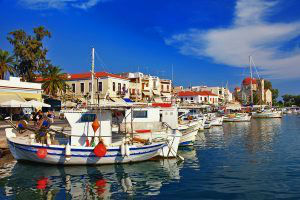 South of the capital is the seaside village of Marathon, followed by the fishing port of Perdika (9 km.). From Perdika small boats ferry visitors to the picturesque islets of Angistri and Moni, ideal spots for enjoying nature, solitude and relaxing pursuits.

Nowadays Aigina is famed for its pistachios and its ceramics so be sure to pick some up while you are there.