In the Footsteps of St. Nicholas; Experience Yacht Charter in Turkey 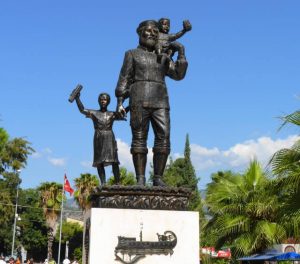 St. Nicholas, Jolly Old St. Nick, Father Christmas, Kris Kringle, and Santa Claus are all names understood worldwide for the warm legendary spirit believed to give love, help and gifts of all sorts in late December of every year.  Today, the legend of this spirit is a conglomeration of old stories, some of which were birthed along the southern coastline of Turkey in the area of Kekova, in ancient Myra, a location well worth visiting on a crewed yacht charter in Turkey today.  To learn more about the history of the original St. Nicholas, when in the Kekova area on a yacht charter in Turkey, slip into the dredged harbor of old Demre for a van trip to the now silted in, but once coastal town of ancient Myra where the story of Bishop Nicholas of Patara, now St. Nicholas, is believed to now be a part of the legend of Santa Claus. 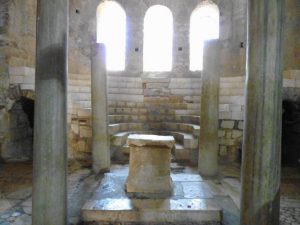 Far from the icy chill of the North Pole, Bishop Nicholas was born in Patara to a wealthy trading family around 300 AD.  Patara is an ancient Lycian, Greek and Roman city surrounded by palm trees and sandy beaches on the southern coast of Turkey.  In the 4th Century AD, Nicholas rose to prominence in Christian history to become the Bishop of Myra.   Legend says that on hearing of a impoverished father of two daughters in Myra who was prepared, due to lack of dowry funds, to sell his daughters into prostitution, Bishop Nicholas anonymously tossed a bag of coins onto the roof of the man’s house to be used as a dowry for his oldest daughter, and then in later years, tossed another bag of coins on the roof of the same man’s house to be used as dowry for his next daughter.  As time continued, other gifts of money were received on roof tops of the needy in Myra.  Once canonized, Nicholas, the Bishop of Myra, became St. Nicholas and the story of St. Nicholas was born.  Today, this story is believed to be mixed into stories from northern Europe creating the modern day legend of Santa Claus. 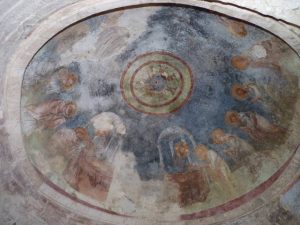 Myra was an important city centuries before Bishop Nicholas was born, and was one of the most prominent cities in the Lycian League.   Mention of Myra has been found documented in writings from the 5th century BC.  In early Christian history, Myra was said to be one of the last stops of St. Paul the Apostle in Turkey before being taken to Rome for his final days.  In the local area of ancient Myra are cliff sides filled with impressive Lycian temple façade and free standing tombs overlooking the remains of a Roman amphitheater.  These ancient remains are still a highlight to see today in modern Demre along with other ruins scattered along the river side near the modern harbor of Demre on a yacht charter in Turkey. 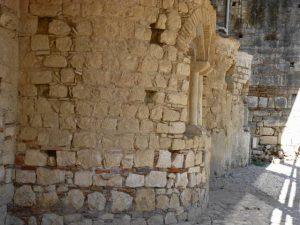 Exterior of the Church of St. Nicholas

Ancient Myra however is probably most well known and most often visited today on a yacht charter in Turkey by those wanting to see the church of St. Nicholas.  The original church where Bishop Nicholas preached in Myra is no longer in existence.  Built in 800 AD, on what was said to be the site of the original church, is a Romanesque stone church which was restored by Constantine IX in 1043 AD.  Today the parts of this structure still remaining are being actively preserved and consist of the main church and apse area along with cloisters to the side. 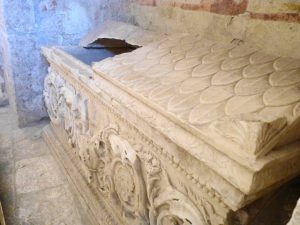 Bishop Nicholas was known to have died in Myra, and thought to have been buried on the site, however various groups have laid claim, including a group from Bari, Italy in 1087, to have broken open the sarcophagus and taken the bones.  Today, the true story and location of the bones of St. Nicholas cannot be verified, nor the actual sarcophagus that may have belonged to St. Nicholas amongst the damaged sarcophagi still remaining inside the church of St. Nicholas.  However, while the bones of St. Nicholas may reside elsewhere, the church is still a location for religious pilgrimage.  St. Nicholas is the patron saint of Greece and Russia and the protector of children, sailors, merchants and scholars.  Today there are many visitors to the church, particularly from Russia with gift and souvenir shops close by catering to a Russian clientele. 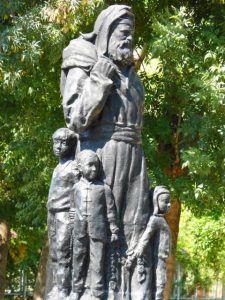 Statue of St. Nicholas at Church

Stop into Demre harbor either by yacht or ship’s tender on a yacht charter in Turkey for a drive into the center of ancient Myra to visit the Romanesque church said to have been built on the location of the church where Nicholas, once Bishop of Myra and now St. Nicholas, is said to have preached and tended to his flock, while on a crewed yacht charter along the southern coast of Turkey. 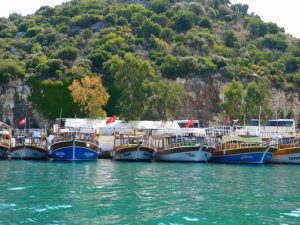