By Missy Johnston on June 14, 2019 — Amidst the white cubic houses with cobalt blue trim, the blue domed white churches, the white trimmed stepped walking streets, the arid beautiful terraced landscapes, the olive, lemon and orange trees, and the grazing goats, are remnants of the ancient civilizations that also once roamed these beautiful islands millenniums ago. And for the historian, and archeology buff, the best way to visit the various and fascinating excavations taking place on these islands, some only having unearthed 5% of what is still to be revealed, is by private yacht charter, as there is no regular ferry system that connects exactly the islands that have these archeological sites, nor is there airline service. The only way to travel between the Cycladic Islands of your choice is to charter a yacht and let the Captain know where you want to go. As after all, this is what private yacht charter is all about….cruising where you want to go, when you want to go.

Akrotiri, Santorini Island
Explore the many secrets of the magical mystical Cycladic Island of Santorini as tucked away on the Island of Santorini, excavations continue revealing the remains of an ancient wealthy trading city. This is a city lost in time; covered by ash and debris in the massive volcanic eruption in the 1600’s BC when the island blew its top, literally. It was in 1967 that excavations began in earnest, and still continue at a site in Akrotiri on the island of Santorini where only 5% of this ancient city is said to be revealed to date. The ruins are fascinating to see, and excavated artifacts are on display at the Archeological Museum in Fira. 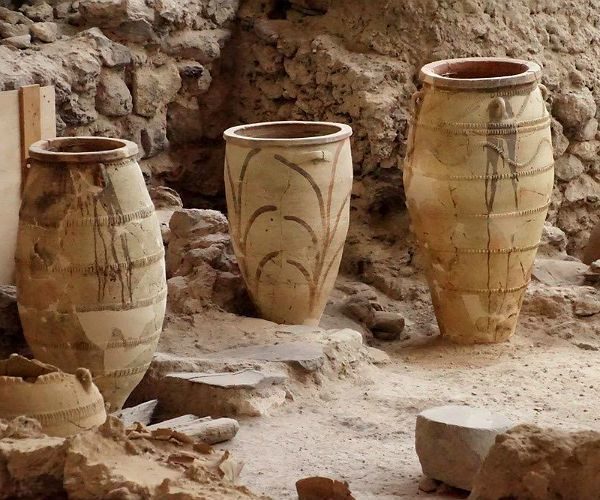 The lost city was discovered in the 1800’s in fields in an area of the island known today as Akrotiri. As the origin of the civilization that built this extraordinary city with three story apartment buildings, running water and a city sewer system was unknown, the excavations are now known as Akrotiri by their location on the island. That which has been excavated, based on excavations in other parts of the world, is now felt to have been a wealthy Minoan trading city, that clearly evacuated the city before the final and most devastating volcanic eruption on Santorini Island completed covered the abandoned city which was then lost in time.

Today, the excavations continue under a covered area where boardwalks and raised walkways allow the visitor to walk amongst that which has been revealed to see what was left behind so many years ago, including city streets, apartment buildings, storage rooms, even what may have been bathrooms with running water. Important wall murals have been removed and carefully restored to be seen in the Archeology Museum in Fira along with artifacts from the excavation. Guides are available to be hired on site, and are recommended.

Delos Island
Delos Island, the center of the Cyclades, has been inhabited since at least the 3rd millennium B.C. As did the Hellenic Nation, this island rose in importance and around 480 BC, became the center of the Delian League. The Delian League located their treasury here solidifying the importance of this island in the ancient world. Today Delos is a UNESCO World Heritage Site and one of the most important archeological sites in the world. This island, located just next to Mykonos is open to visitors 12 hours during the day, every day of the week. 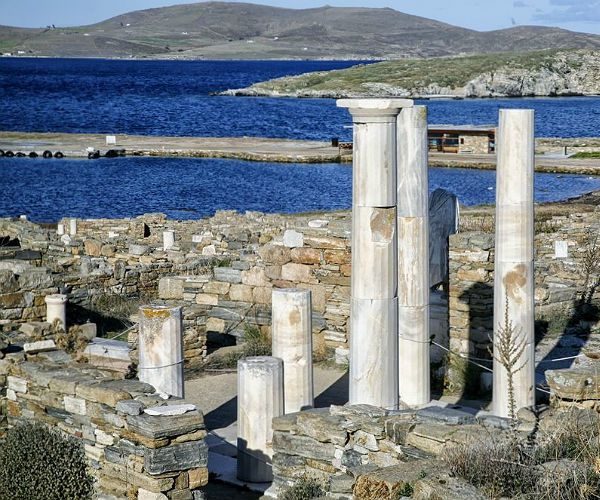 Claimed as the mythological birth place of Apollo, Delos was immensely wealthy and was so impressive that the Romans retained this island as a free port when they came into power. Delos finally collapsed in 88 BC when conquered by Mithridates. Today, the remains of what was once a very powerful island are only partially excavated.

Visit the museum first which is where the famous marble lions that once guarded the sacred lake are now stored. The ‘sacred lake’ is the supposed birthplace of Apollo which is close by, but now over grown and dry.

All over the island are the remains of temples, homes, and monuments. There is also an impressive array of different cultures that left their mark on the island. Shrines for Samothracian, Egyptian, and Syrian Gods are interspersed amongst the Greek shrines. The Temple of Isis stands high above most of the town. Entire sections of the residential areas are more or less intact. The streets are still clearly outlined, many of them with sewers running underneath. The northern section of town featured more modest living quarters with smaller apartments, each with only several rooms.

Wildflowers have gained foothold in the ruins, peaking out in various places, to add color. A hill rises on the south side of town in an area known as the theater district. It is here that some of the truly opulent houses can be found with beautiful mosaic floors often showing dolphins, which symbolized Apollo or panthers, which symbolized Dionysus. In the House of the Masks, which is virtually fully intact, a mosaic can be seen of Dionysus riding a panther, along with another mosaic of theatre masks. Several rooms in this building contain large sections of the original wall decoration as well as the floor mosaics.

It is well worth spending a full morning exploring this island and visiting the museum by having your yacht anchor in Delos Harbor and coming ashore by ship’s tender. Private guides are available and are recommended.

Milos Island
A volcanic Island, Milos was prized in Ancient Times due to the cache of volcanic created obsidian rock found on the island and mined for making weaponry, and knives needed for everyday living and hunting. Mining obsidian and the creation of weapons, knives and other utensils and implements on the island was the main industry on Milos in Ancient Times making Milos a very wealthy island which perhaps provided the money to commission the beautiful and famous sculpture of Venus de Milo found on the island and now on display in the Louvre Museum in Paris. The archeological and historic sites on the island are several. 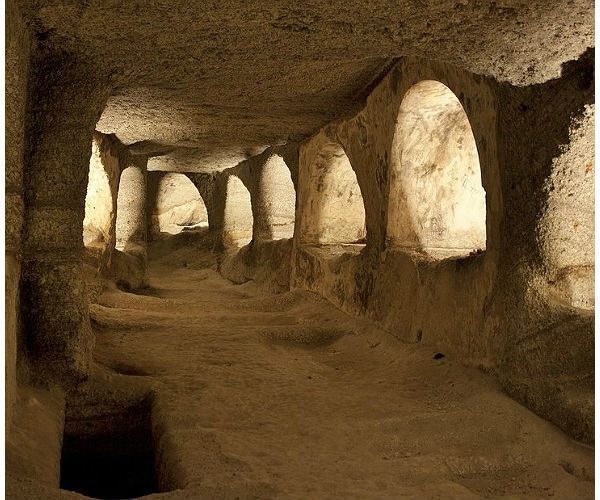 Phylakopi excavation site on the island was one of the greatest pre-historic settlements in the Aegean. The settlement was heavily inhabited starting from the Early Bronze Age to the Late Bronze Age and into the Mycenaean Period until around 1100BC when the settlement was abandoned. Artifacts found show that the inhabitants were traders with the rest of the Cycladic Islands, and as far away as mainland Greece and the Eastern Mediterranean. Trade items from this Milos settlement were items made mainly of local obsidian. Numerous clay and stone vessels, stone, clay and bronze figurines, and bronze items have been found, however, the most impressive find is a gold face mask.

Right above Klima and below the settlement of Trypiti overlooking the sea where the ancient town of Milos once was is an ancient Roman Theatre, along with a stadium, an ancient market, and an early-Christian baptistery. The Roman Theatre however is the most impressive structure left, with 7 tiers built to hold 700 spectators that accessed the theatre via 6 stairways. Parts of the stage are preserved along with carved marble reliefs.

Also, on Milos are early Christian Catacombs, the only preserved catacombs in Greece dating back to the 2nd century AD and used until the late 5th century AD as the cemetery of the first Christian community on the island. To date 291 tombs have been found, however it is estimated that there are at least 1500 to 2000 tombs in the area with over 8000 bodies buried within the tombs, as each tomb housed more than one body. The tombs were all arched and dug into the soft rock. The catacombs were discovered accidentally by looters in 1840.

On the island is an Archeology Museum and a Mining Museum. For any archaeology buff and historian, Milos offers quite a bit of history and important archeological sites, and several museums, in which time can be spent learning the fascinating history of an island that grew wealthy from that which its volcanic origins provided, caches of obsidian.

Antiparos-Despotiko – Tsimintiri
Once believed to have been one island in Ancient Times, these three islands, just off of the coast of Paros Island, and only reachable by private yacht, are the site of what is increasingly being understood to have been an important ancient settlement. Tsimitiri mainly has graves located on the island, and it has not yet been determined exactly how the land on Antiparos was involved, however, excavations are ongoing on Despotiko where there appears to have been a very important Sanctuary to Apollo. 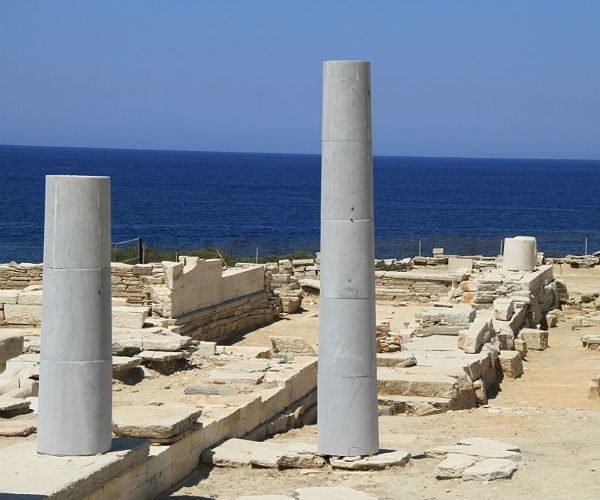 Despotiko was a maritime crossroads where visitors and goods came from mainland Greece, other Aegean islands, the Ionian Islands and Rhodes, Cyprus and Egypt. The sanctuary, originally built by the Parians from Paros out of famous Parian marble, may have been larger than the Sanctuary to Apollo on Delos Island.

The ruins are open air and easy to wander around. There may be archeologists at work as this is an ongoing relaxed archaeological dig, relying on volunteers and donations and may be an archeology site where you can engage the archeologists and volunteers, depending on who might be there for more information on what might be happening and being found in a more “hands on” manner.

Ios Island
On Ios is the very important archeological site of Skarkos, thought to be over 4500 years old and the best ancient Cycladic prehistoric site in Greece. Located in western Ios, the archaeological site is overlooking one of the finest natural harbors in the Cyclades, and is easily reachable by having your yacht on anchor in the harbor with the archaeological site of Skarkos up on the hill overlooking all. Skarkos was inhabited from around 2800BC to 2300BC during what is the Early Cycladic II period. 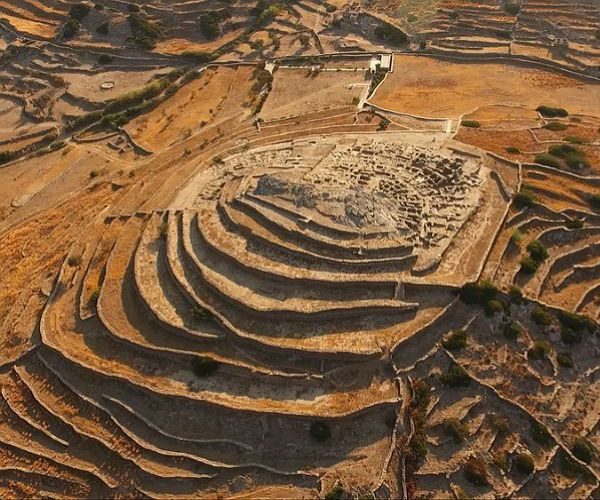 Excavations reveal well built houses set closely together along narrow streets and squares. Today still able to be seen are the ground floors, doorways and stairways. Most of the buildings were at least two stories built with stone walls. The settlement was abandoned after an earthquake and never re-settled which kept the remains well preserved until found again in recent history.

Many artifacts have been found including pottery, stone tools, figurines, and obsidian tools. Skarkos prospered as it lay at the junction of several key trading routes that linked the Cycladic Islands with Crete, Asia Miner, and mainland Greece. Visit the Archeological Museum in Ios as well to see artifacts from Skarkos as well as the archeological site. In 2008 the site received a European Union Prize for excellence in Cultural Heritage Conservation.

Private yacht charter is your own hotel and restaurant that you can take with you, with your own private crew for full service, while you visit archeological and historical sites in the beautiful Cycladic Islands of Greece. And as an added bonus, also enjoy the crystal clear blue green waters and cool off with a swim, relax on a beach, join the villagers around a table at a local taverna for ouzo and octopus, and overall enjoy all there is to enjoy in addition to the history and archeological remains of the Cycladic Islands of Greece. And after learning all there is to know about the history and archeological sites during the day on an island, perhaps at night, kick up your heels in a lively Greek dance or two in a village square under the stars, in the cool evening air