By Missy Johnston on Aug 26, 2019 — The names Mykonos and Santorini resonate with everyone when hearing the words “Greek Cycladic Islands”; however, these are only two of many islands in the lovely Cyclades Islands. On private yacht charter, you decide where to cruise, and each and every island to visit, so ask your crew to steer towards these 5 secret Cycladic Islands, that few ever visit when next you cruise through the Cycladic islands on a Greek yacht charter. Here traditional is the norm, where the local men play backgammon in the shade of the plane trees and relax with ouzo and octopus in the evening. Where in the Chora, children play in the main plaza, and everyone knows all of the local cats, each of which belongs somewhere, although it appears as though they belong to no one. Where blooming bougainvillea grows wild over whitewashed buildings trimmed in various shades of blue, and octopi are strung up outside the local tavernas on lines to dry.

This is the everyday Cycladic Greek island lifestyle of yesteryear still flourishing on these lesser known islands, most of which do not have an airport that are truly most easily visited by private yacht charter, at least if visiting on your own schedule when you want to visit. Cruise into each local harbor and relax into the island lifestyle, each island with a different feel, on a Greek yacht charter, on your own time, at your own pace.

Sikinos
This is the Island of Festivals. Tucked away down in the southeast corner of the Cycladic Islands, Sikinos is a tiny island that still adheres to celebrating traditional festivals, especially religious festivals. The residents enjoy every celebration to its fullest with music, folklore dances, food, and wine and love to include all visitors in every celebration. 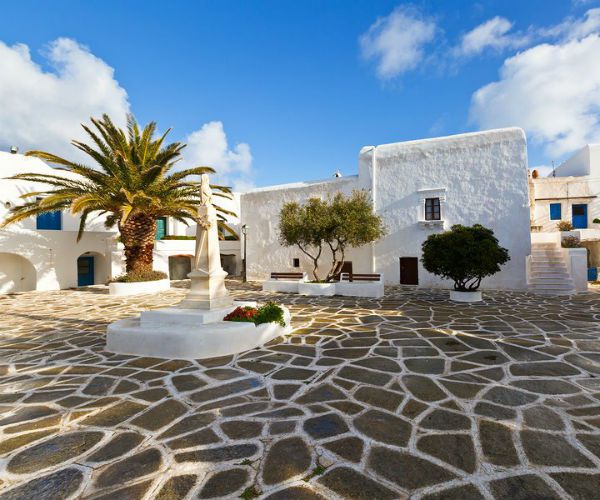 If planning to visit by yacht charter, the most important religious events include Zoodohou Pigi, the feast day of the Chrysopigi monastery on May 2, Aghios Panteleimonas on July 27, the Holy Transfiguration on August 6, the Festival for the Dormition of the Virgin Mary on August 15, and the Exaltation of the Holy Cross on September 14. Each religious festival has different traditions; however, each religious festival starts with a church service, a great feast, and after food and drink, starts music and dance which can go on until the wee hours of the morning. During the festivities, the island echoes with the sounds of the violin, lute, and bagpipes. The islanders are very particular about each and every festival with careful preparations made in advance. Traditional dishes are prepared for each great feast, and houses are freshly whitewashed and decorated.

There is also a non-religious Sikinos Summer Festival which is the most popular festival on Sikinos. This is a grand festival taking place in August which lasts for about two weeks. All islanders and visitors are welcome to join in. There are many events daily, including concerts, art exhibitions, and dancing. On a private yacht charter, where the itinerary is yours to make, the route can easily be organized to hit at least one of these festivals. Include Sikinos in a crewed yacht charter for the once in a lifetime experience to eat, drink and dance celebrating a traditional Cycladic festival with the islanders. And remember, this is not just dancing, this is Greek dancing at its traditional best.

Amorgos
Close by Sikinos is Amorgos Island, also a tiny little island, and the furthest east of the Cycladic Islands. Probably the most iconic and easily identified part of this island is the fantastic Monastery of Chozoviotissa painted white, built into and clinging to the side of a cliff on the other side of the island from the main port. This is what identifies and sets this island apart from the rest of the Cycladic Islands, and lets any visitor know at once on approach by sea, that yes, one has reached Amorgos Island. 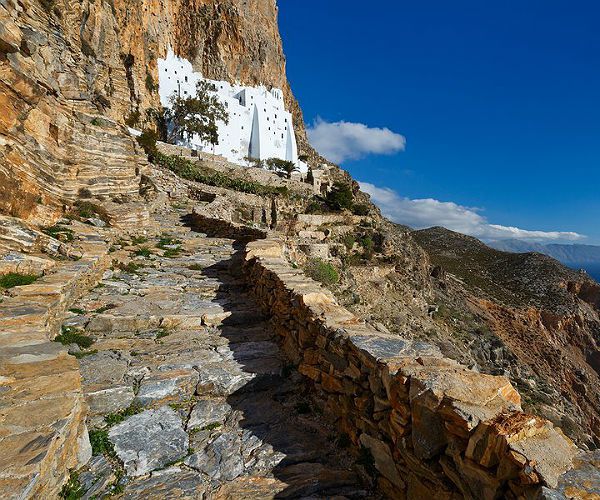 Inhabited since the Early Cycladic Era, which has been evidenced by archaeological finds on the island, Amorgos has a long cultural history and tradition. This is an island where one steps off the beaten track to visit an island by yacht charter that has preserved its traditional feel; where the locals welcome you with a smile on their face and perhaps a shot of the local raki based liquor steeped in aromatic herbs. Once on shore, walk across this island on the many trails and walking paths through a countryside redolent with wild herbs. One trail or another will end up at one of the many beaches around the coastline of this lovely island.

The monastery has eight floors connected by narrow stone staircases carved into the rock with an interior that is like a labyrinth. Be sure to make it to the top balcony of the monastery for a stunning view. The cells of the monks are also all carved into the rock. Two icons of the Virgin Mary and other religious relics from the period of Alexios Komninos are all housed at the monastery. The ground floor has a worthwhile ecclesiastical museum.

The main town of Amorgos, the Chora, is, to be safe from pirates, located in the center of the island, is a genuinely Cycladic village and one of Greece’s most striking and picturesque island capitals. It is full of charming alleys, water fountains, traditional Cycladic houses with bougainvillea trees in court yards and many churches. This is a little village full of walking streets, a 13th century castle, and monasteries. And another island without an airport that just by asking your Captain to set a particular course you can visit and explore, where it could very well be just you and the locals.

Milos
Wealthy in ancient times, due to the huge amount of volcanic razor sharp obsidian found on the island that was coveted for knifes for everyday use and weaponry, Milos had a very healthy trade in implements made with obsidian. Today visit the island for the archeological sites and the history, however also because of the beautiful beaches, the caves washed into the soft rock cliffs, and the quietly trendy nightlife. 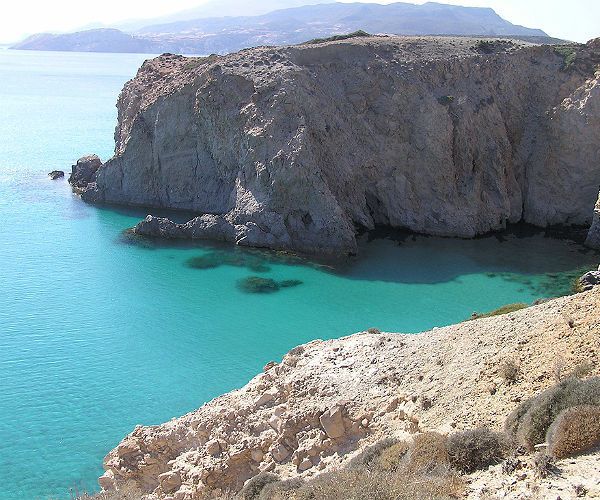 Besides the ancient history of obsidian trade, Milos was also an early Christian island, and Christian Catacombs have been found and excavated. While only a small portion of the catacombs has been unearthed today, one can visit and gain a feel for the Christian world in Ancient Times.

Like other Greek Islands, Milos has many beautiful beaches, over 70 in fact to enjoy for sunning. The most famous beach is Sarakiniko, with a moonscape landscape filled with white rocks. Other amazing Milos beaches are Tsigrado, Paleochori, Agia Kyriaki and Firiplaka. It is the huge number of caves however that sets Milos apart from other of the Cycladic Islands. The most important of these caves are Papafrangas, Sykia, and Kleftiko. These caves are great to explore for swimming and snorkeling as the colors of the waters inside the caves are unique and beautiful.

Antiparos and Despotiko
Just off of the much larger Cycladic Island of Paros, Antiparos and Despotiko were once believed to be connected as one larger island and in Ancient Times were a maritime crossroads where visitors and goods came from mainland Greece, other Aegean islands, the Ionian Islands and Rhodes, Cyprus and Egypt. Today, they are two separate islands sitting side by side. Despotiko is uninhabited with just extensive ruins of what is believed to have been a Sanctuary to Apollo, originally built by the Parians from Paros out of famous Parian marble, which may have been a larger and more important Sanctuary than the Sanctuary to Apollo on Delos Island. Antiparos has a small little settlement with tiny little walking streets and a large cave with amazing stalactites and stalagmites in all its rooms. There are beautiful beaches and lovely water in all of the anchorages on each island. 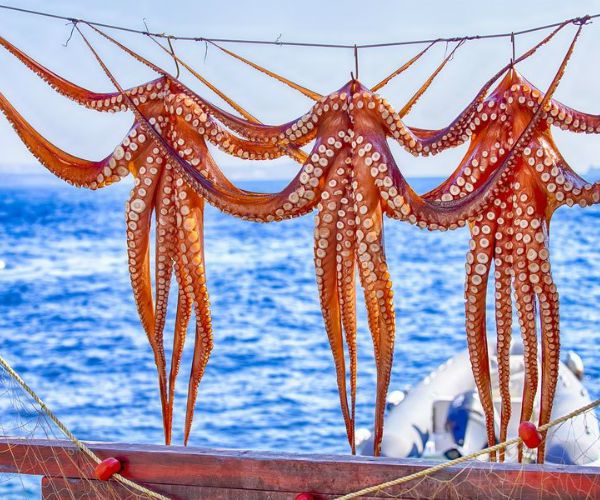 The ruins on Despotiko are open air and easy to wander around. There may be archeologists at work as this is an ongoing relaxed archaeological dig, relying on volunteers and donations and may be an archeology site where you can engage the archeologists and volunteers, depending on who might be there for more information on what might be happening.

To date, many artifacts have been found including small personal items such as jewelry, ointment and perfume containers, ceramic objects, agricultural tools, vases, basins, and other household implements such as lamps and amphorae and statues and sculptures. Because of the freedom of being on your own charter yacht, pop over to Antiparos to enjoy the beautiful little anchorages, and explore Despotiko to see an extensive archeological site “in action”. If excavations are ongoing, those digging may even welcome a little help.

Folegandros
With its main Chora high up over 200 meters from the Aegean Sea built in the 1300’s, Folegandros cannot help but charm. The little walking streets and alleyways snake through the Chora with one walking street zig zagging up the hillside outside of Chora to a lone church perched high up on the hillside overlooking the capital village. It is in these less traveled traditional Cycladic Islands where the prettiest towns and villages are found. 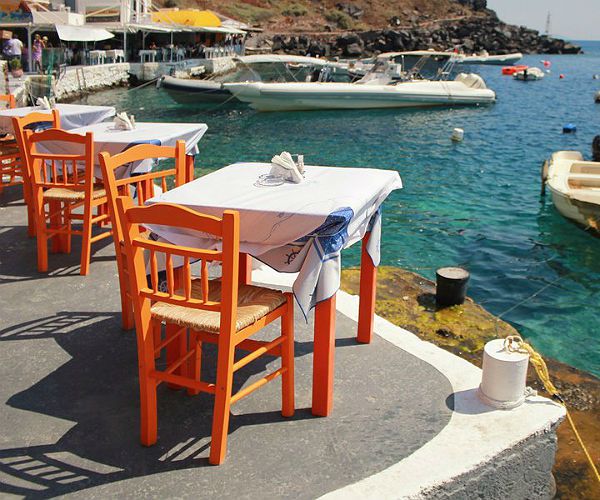 In the Chora on Folegandros, 200 meters above the sea, the sunsets are spectacular, and the local tavernas are serving very local traditional foods of fresh octopus, Greek Salad with wonderful local goat’s cheese, stuffed tomatoes and vine leaves, handmade pasta with rabbit sauce, cheese and spinach pies and fresh fish. There are few cars, so here donkeys are still used to carry loads. Peek over walls to see lemon trees in courtyards with their fruit protected from the Meltemi Winds. On the quays, local fishermen can be found untangling their nets and cleaning fish, while the local taverna owners hang octopi out on lines to dry. This is an island where a bucket of fresh sea urchins might show up on a taverna menu, or where the fish of the day might have just been caught. The island is only 8 miles long, with hillsides redolent with wild thyme and oregano. There are few beaches, however on such a small island it takes no time to reach one of the beaches, and there are beautiful anchorages. This is an island where it is impossible to get lost, but easy to get drawn into the daily traditional life on a lovely little island where goods are still delivered by donkey.

With private yacht charter when it is your choice where you cruise, head to Sikinos Island for a festival and late night Greek dancing to violins, lutes and bagpipes in the village plaza, visit the Monastery of Chozoviotissa built into the side of a cliff on Amorgos Island, snorkel the beautiful blue green waters in the caves of Milos Island, maybe lend a hand on the archeological dig on Despotiko Island, and settle in with the locals for ouzo and octopus on Folegandros Island. These are 5 great Cycladic Islands that while less traveled are very rewarding for those that find their way to each harbor.