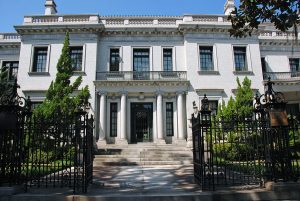 Located on the Intracoastal Waterway, Savannah, Georgia is a city steeped in history and the main port on the Savannah River. Agriculture was the mainstay of Georgia for centuries and all was exported out of the port of Savannah. In the 1800’s, Savannah was the busiest port in America. Exported goods started with indigo and silk, but soon switched to cotton, with Sea Island Cotton a specialty. Savannah, through trade, was a wealthy city in the 1700 – 1800’s, which showed in the buildings and lifestyles of its citizens. As a trade city with the importation of exotic goods from around the world, Savannah also became known as a center for culture and high style. Today the southern charm and hospitality of Savannah is internationally known, and Savannah is a “must see” port on a yacht charter cruise through the south eastern coast of America.

Cruise up the Savannah River to the Savannah Riverfront area backed by the Historic District, which is one of the largest Historic Districts in the United States. Dock in the old merchant and cotton warehouse area along River Street, where these centuries’ old buildings now house a variety of shops, restaurants and hotels, making this a beehive of constant activity for young and old. And, watch while strolling historic River Street as large modern cargo ships slip past the old waterfront as a testimony to time marching on.If you can, take a walking architectural tour of the fine old homes in Savannah, or just wander the streets to see some of the finest examples of Federalist Architecture in America. The city abounds with history including a Haunted History Tour. Visit Fort Pulaski captured by Union Soldiers during the Civil War and now a National Monument. The capture of Fort Pulaski stopped trade through Savannah and brought this wealthy city to a standstill and locked in time leaving an 18th and 19th century testament in style and architecture to seafaring trade and wealth.

Tybee Island, just 18 miles east of Savannah, is a long low barrier island with miles of oat grass covered sand dunes. A three mile long beach stretches along the length perfect for sunning, swimming, shelling or a beach picnic. The Tybee Lighthouse was built in 1773 along with a charming light keeper’s cottage. This area of Georgia is easy to enjoy cruising through.
Missy Johnston2019-07-05T23:37:51-04:00