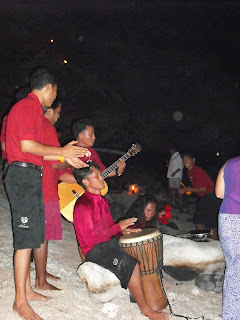 Coming into a lovely anchorage while on a private yacht charter on board charter yacht Silolona, without any other boats, or people around, Silolona was anchored and the crew went ashore to create a fabulous Beach Barbecue.

On the beach were umbrellas arranged around sun pads, chairs, and tables, decorated with beach found shells, votives, driftwood, and palm leaf woven decorations. Holes were dug in the sand surrounding the area, and placed down in the holes were lit torches. Votives were placed in sea shells, and inside hanging paper lanterns across the cliff front behind the beach. A cookfire was created and the crew were waiting with all of their instruments to play beach music, for songs and dancing. First, however we lit fires under large paper wishing balloons. When the hot air filled the paper funnels, wishes were made and our wishing balloons sailed off into the night carrying all wishes into the universe.

Kadek and Victor had set up a bar and served cocktails, wine and beer and soft drinks in glasses with cloth napkins. This was a beach barbecue with 5 star service! Chef Bobby and crew brought ashore the food and cooked everything over the open driftwood fire, which gave all that lovely open air fire flavor, which is hard to find. We had fresh grilled tuna, smoked chicken, lamb and beef kabobs, a lovely curry, sticky rice, and grilled vegetables. Fresh grilled bread and fruit rounded out a lovely beach dinner.

After dinner, we had more singing and dancing with the crew playing the instruments and singing local traditional songs. And finally, Kadek treated us to a fire baton dance, with the twirling fire baton, a skill he has been practising and perfecting. At the end the full tired group went back to Silolona to snuggle into our staterooms dreaming of fresh baked croissants for breakfast. 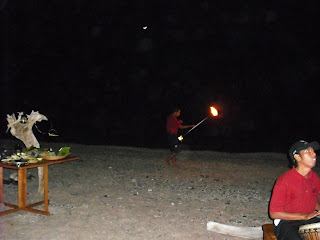 On our final night on board, we were all off swimming, or snorkeling or diving, and meanwhile, the crew transformed the top deck into a ceremonial dinner table and lounging area. Each crew wore the traditional clothing from their village and area of Indonesia. As Indonesia is at least 3500 miles wide, there is a wide variety to local traditions and clothing. The area and tables were decorated with flowers, palm leaf woven decorations and swathed in black and white checkered cloth symbolizing in Bali, the balance of opposites. 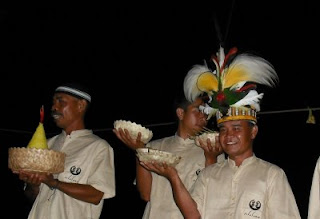 Again, we were treated to song and dance from the crew, and after being seated at our ceremonial table, the crew appeared in single file, each with a dish, that might be part of a ceremonial buffet, serving us each with a bit from each dish as they circled the table. We were treated to a wide variety of traditional foods, all of which were special and excellent. This was truly and experience to remember.