Where is the Real Game of Thrones “Kings Landing”? 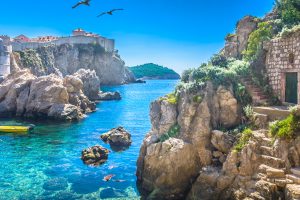 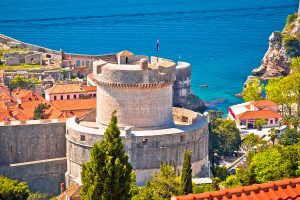 The Old Town of Dubrovnik was founded in the 7th Century by refugees from Epidaurus in Greece and today is a UNESCO World Heritage Site, brimming with historical significance.  Situated against the Adriatic Sea, with fortress walls rising straight out of the beautiful blue waters, Old Town was a fortress for centuries, protecting those that lived inside the towering walls from invaders, pirates, and any sort of danger that lurked outside.  The surrounding fortress walls of Old Town, the many buildings, walking streets, and even the gates of Old Town, all built out of local limestone, were used as filming locations.  Plus, Lovrijenac Fortress, Bokar Fortress and Lokrum Island all just outside of the walled Old Town Fortress were used as filming locations. 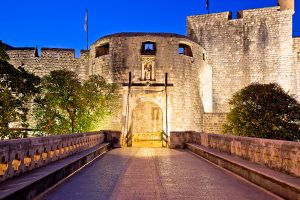 Most of the filming that took place in and around Dubrovnik Old Town began in Season 2, with a total of 19 sites in and outside of Old Town being used to film scenes in the Game of Thrones.  Lannister’s were filmed in Seasons 2 and 3 at Pile Gate, most famously in a scene where King Joffrey, when attacked entering King’s Landing, screams “kill them all”, and when Jamie Lannister finally returns to King’s Landing after his journeys sans a hand.  Myrcella is waved good-bye when leaving King’s Landing for what becomes her last time alive, just outside the Old Town Walls of Dubrovnik close to Pile Gate in the small little harbor located between Bokar and Lovrijenac Fortresses.

One of the greatest fortification systems in the world, and magnificent, whether used as a filming location or not, the fortress walls of Old Town were a backdrop for many scenes in the TV Series, filmed on the ramparts and in front of the walls.  Minceta Tower, the highest point in Dubrovnik, was used a filming location both for the “House of the Undying” in Qarth, and Daenery’s search for her stolen dragons. 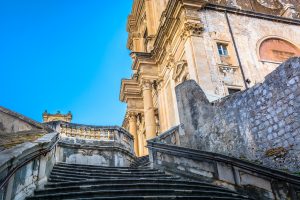 The 16th Century Ethnographic Museum was transformed into Littlefinger’s brothel in “King’s Landing”. The Jesuit Stairs were used in various scenes, perhaps most famously as the setting from where Cercei begins her walk of atonement to return home.  The 15th Century Rector’s Palace, now a museum, was the location for the Spice King’s mansion whom Daenerys visits to beg for ships to carry her army across the “Narrow Sea”.  The Stradun, the main street in Old Town was used for the Walk of Penance in Season 5.  The narrow streets of Dubrovnik were the backdrop for most of the market scenes in “King’s Landing” as well as scenes with the City Watch, and the hunting down and murder of the bastard children.

The Ploče Gate on the eastern side of Old Town was used several times, most notably as the entrance to the “Red Keep”, used by Cercsei at the end of her Walk of Shame. Hotel Belvedere is a derelict hotel just outside Dubrovnik where the infamous fight scene between Prince Oberyn and the Mountain in Season 4 was filmed in the little amphitheater on site. Fort Bokar, which forms part of the Dubrovnik City Walls, was used in often when filming the sea walls for “King’s Landing”.  Fort Lovrijenac was used often when filming scenes that took place in the Red Keep in Season 2 and 3.  The nearby island of Lokrum was the location for the “City of Qarth” where Daenerys socializes with the city’s most important citizens. 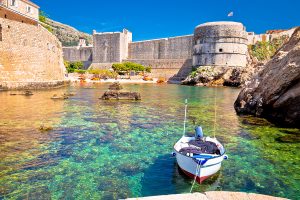 The Harbor where Myrcella was waved good-bye

Old Town Dubrovnik was felt to be very evocative of exactly what might be in the mind’s eye for so many of the scenes filmed in the Game of Thrones.  However, don’t stop there.  Cruise along the coast of Dubrovnik on a crewed yacht charter up to Sibenik to see various filming locations along the way for other important scenes in the Game of Thrones TV series, and see more of the lovely coastline and islands of Croatia.