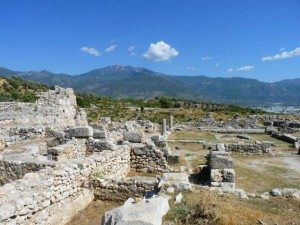 Xanthos, the capital of the ancient Lycian Federation, was its greatest city for most of Lycian history and dates back to at least the 8th century BCE. Letoon, the sacred cult center of Lycia, is located 10 km south of Xanthos and together they are listed in the UNESCO World Heritage Sites list. 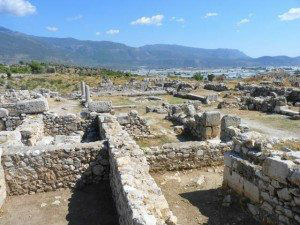 Located on a serene hillside overlooking the Esen River, Xanthos offers a stunning view of the Xanthos Valley and Taurus Mountains. However, the history of this ancient site is a violent one. The people of Xanthos chose mass suicide over defeat by Persian forces, setting fire to their women, children, and treasures before their own demise while attacking the Persians. History repeated itself in 42 BCE with another mass suicide due to the approaching Roman army, which shocked Brutus who offered money to his soldiers to save citizens, of whom only 150 survived.

View the fifth century BCE Xanthian Obelisk, a tall pillar tomb with the longest Lycian inscription in existence on all four sides, which helped modern scholars break some of the code of this archaic, difficult language.

The Harpy Tomb, of the same era, sits upon a massive base, and is a grave-chamber. It’s name is derived from the Greek mythological harpies, creatures with the head of a woman and the body of a bird, because of the winged women figures in the frieze. 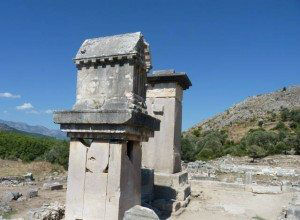 The Pillar Tomb is unique in Lycia with a normal Lycian sarcophagus standing upon a shorter pillar tomb. This tall tomb dates to the 4th or 3rd century BCE.

The Amphitheatre dates from the 2nd century CE. Only the upper rows of the structure are missing and the stage building is still partially standing. It was once two stories, decorated with columns.

The Acropolis, situated above the amphitheatre, include ruins of a temple dedicated to Artemis and the foundations of a large structure thought to be a palace that was destroyed by the Persians. The Acropolis offers grand views of the entire valley and river. The recently excavated Roman-Byzantine Street, outlines an area once lined with shops.